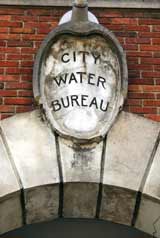 A month ago, I shared the Portland Water Bureau’s proactive plan to reduce the risk of collisions between their vehicles and bikes around their Interstate Avenue facility.

The policy was made official on Tuesday when Water Bureau administrator David Shaff sent the following email to all employees:

As a result of several recent vehicle/bicycle collisions throughout the City, and near-misses at one of the area’s most dangerous intersections at Broadway and Wheeler, the Interstate Safety Committee has worked with the neighboring business, members of the bicycle community, PDOT, and Portland Police to identify potential solutions.

The committee recognizes there is no single solution. However, given the seriousness of the situation, the potential severity of a collision, and the necessity to prevent future accidents, the Portland Water Bureau is permanently implementing the following policy:

The primary route to/from the Interstate facility will be via Larrabee and Interstate, via Hancock, Tillamook, or Wheeler at the Green shed and rock yard gate.

Drivers on these routes will still be required to be watchful for bicycles and pedestrians; however the committee feels that the line of sight and travel distances are better, allowing the driver better interaction space and time with the other road users.

While there may be an occasional need to access the streets listed for business purposes, a short cut to the Interstate facility is not a valid reason.

Failure to follow these instructions may result in disciplinary action.

The Safety Committee and the Water Bureau will continue to work with PDOT, the neighborhood association and other road users for additional safety improvements.

All employees are encouraged to follow these same routes in their personal vehicles. 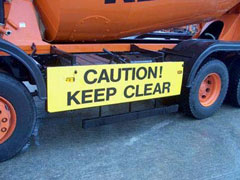 Side-underrun guards will be
installed on the City of Portland’s truck fleet.
(Photo: PDOT)

This proactive move by the Water Bureau to improve bike safety comes on the heels of news that the entire City of Portland truck fleet will spend $50,000 to install improved mirrors and side underrun guards (which prevent bikes from getting caught under the wheels when a collision occurs).

Actually, the truck changes are to the entire city fleet, which includes Transportation\’s trucks. One of the nice things that I learned last year is how ahead of the curve our fleet is with equiptment safety.

The fact that it\’s only going to take $54,000 to update the fleet speaks to the fact the fleet management has agressively pursued best practices for equipment safety.

For example, non-mandatory mirrors, back-up cameras, placement of tool boxes to block side underrun crashes, additional turn signal indicators, and other safety features have been a regular practice for the city\’s fleet.

PDOT does not deserve the credit for that. Those safety enhancements are the result of the leadership in Fleet.

What are \”side underrun guards\”?

\”What are ”side underrun guards”?

Sorry dan… they are guards that go between the wheels of trucks so that when a collision occurs, the bike less likely to get caught up in the wheels. I have added a link to the story with more info.

There\’s a photo of one on page 15 of this PDF document:

Once again, I\’m compelled to say how proud I am to work for a City bureau that is stepping up to be part of the collective solution to share the road. AND I am a bike commuter who rides by the Wheeler/Broadway intersection as part of my commute.

It is only in the past few months that I even knew what a \”right turn hook\” was and now I am very, very aware of this potentially lethal traffic situation and much more careful when it exists for me as a cyclist and also as a driver who drives among cyclists.

I just want to publicly say thank you to Jeff Guard and David Shaff at the Water Bureau for really taking this entire situation very seriously and implementing some changes that benefit our entire community.

I had several close calls at this intersection when I first started bike commuting. It doesn\’t bother me now that I know what to look for and where not to be, but it can be very dangerous for the uninitiated. This is a very positive step toward making that intersection a bit safer.

Thanks so much to all those involved in making this happen. 🙂
(Jonathan, could you post a map of the intersections discussed here? Thanks)

Maybe it\’s just the time when I commute, but I go through this intersection almost every day, and haven\’t had any close calls… Still, I can see how problematic it could be, and it\’s nice to see that the city\’s being proactive about their role.

Sarah Bott says:
[I]It is only in the past few months that I even knew what a \”right turn hook\” was and now I am very, very aware of this potentially lethal traffic situation and much more careful when it exists for me as a cyclist and also as a driver who drives among cyclists.[/i]

Me too. It is very probable that bikeportland saves lives.

And we are not done. We are still working with multiple organizations and interest groups on further ideas, such as better mirrors, promiotional events, signage and other \”attention getters\’, etc. Our goal is a higher awareness throughout our region of the importance to truly share the road. It is hard to reach everyone with a unified message, but that is a challenge we intend on meeting.

Thanks to the Safety Group of the Water Bureau for helping to \”Share the Road.\” It is actions like this that make Portland a better place for everyone. It it truly appreciated.