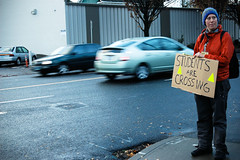 Students at Buckman Elementary School in Southeast Portland have taken traffic safety into their own hands.

Carrying signs that read “Students are Crossing”, the third and fourth-graders have held several awareness actions to draw attention to the unmarked intersection of East Burnside and 16th Avenue; a high-speed intersection that is just four blocks from their school.

Working with the City of Portland’s Safer Routes to Schools program, the Bicycle Transportation Alliance (BTA) helped kids with a safety campaign to get people in cars to lower their speeds and stop for pedestrians. 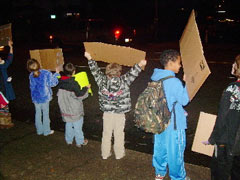 The BTA’s Stephanie Noll helped lead the effort. “We let the kids come up with slogans and they voted for this one. It’s been a great project.” Noll says the kids worked on the campaign in their “Make a Difference” afterschool program.

After a recent sign-holding session, Noll led a group of students and parents into local businesses and encouraged them to place the “Students are Crossing” signs in their storefront windows.

How did business owners respond to these young activists?

“Every business we visited obliged and thanked the Buckman students for their work to make the neighborhood safer.” 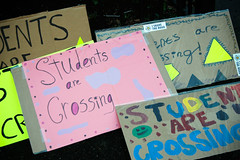 A few of the signs made by students.
(Photo © Jonathan Maus)

Surveys have shown that intersection safety and traffic speed are top concerns for parents in making decisions about school travel options.

On December 6, PDOT and the Portland Police Bureau’s Traffic Division collaborated on a Crosswalk Enforcement Action at the intersection.

According to PDOT’s pedestrian safety expert Sharon White, from 1:30 to 3:00 pm officers handed out 35 citations and three warnings.

To make the crossing safer, The City of Portland has secured funding for a crossing improvement on East Burnside, but a Water Bureau project slated for the same area is holding things up and it’s not expected to be installed for at least 1-2 years.

Wasn\’t PDOT going to make a crossing improvement to this intersection? There are marks on the street that seem to indicate curb extension installation locations, and I thought I remembered Roger telling me that there was going to be a project here.

I have to use this crossing twice a day and during rush hour it\’s just so obnoxious how long you have to wait for a break. So if you need another sign-holder, give me a call!

that\’s great news – i am amazed that kids cross there yet improvements haven\’t been made sooner. that\’s a tough cross even on a bike!

those signs are simply gorgeous. way to go, Steph: an advocate for bike safety AND proponent of slogan-side democracy (student voters for sign slogans today, co-owners of participatory government tomorrow)!

As a motorist part of the problem I have with crosswalks is that at night I can never see the pedestrians until I\’m already practically in the crosswalk – marked or unmarked. Parking is allowed too close to corners – Pedestrians are often hidden by the cars… And it seems like things are lit well enough. I always feel bad when I drive through a crosswalk and see that a pedstrian has been waiting there – especially in the rain!

Anywya, I\’m not saying this is the case at this particular crosswalk – just a gripe I\’ve had about crosswalks in general for a long time!

Hmm. Seems like a job for cops to me…. Poor kids.

This is *really* great to see! Thanks for covering this inspiring news, Jonathan!

As a motorist part of the problem I have with crosswalks is that at night I can never see the pedestrians until I\’m already practically in the crosswalk – marked or unmarked.

Try slowing down and remembering that the speed limit is the upper limit of safe and legal speeds.

I had a great time working with the Buckman students on this project. It was especially cool to see how empowered students felt after acting as campaign spokespeople at the neighborhood businesses. They did a fantastic job. We\’re looking forward to the planned crossing improvements on Burnside, and I\’m looking forward to having the budding Buckman bike and ped. advocates working, campaigning, and voting in Portland, if not running for office!

I walk more than I bike, and I find most all intersections to be hazardous to peds. If one is not in a car, one is not seen and does not count. Right on red is a big contributor to this problem along with drivers going too fast and not paying attention or even thinking that there is anyone else on the road except them.

I have come to expect that drivers will NOT stop, look, notice or even care if they almost hit me. And this is in any part of town.

Sam talks about the 3-E\’s – Education, Engineering and Enforcement. I would love to see the city take this issue seriously- I mean really seriously. I am tired of close calls.

I realize what a speed limit is. I drive always at a safe and reasonable speed for the conditions.

What I\’m saying is that it would be nice if measures were taken to improve visibility at both marked and unmarked crosswalks.

I believe that all people, no matter what their form of transportation, severely underestimate their visibility. In addition, the way that the city has designed many things doesn\’t help.

I am an extremely responsible driver, but even so, I feel that many times the conditions in which I am given to drive in prevent me from being part of a absolute safe commute for all.

Now, as a cyclist that rides by Sunnyside Environmental School (or whatever it\’s called) on Salmon as part of my commute, the most dangerous thing for me is parents! Lots of parents driving and not really looking out for cyclists, pulling out while on cell phones, rolling though the stop signs with cars, bikes and peds in clear sight, driving while turned around to deal with little ones in the back seat. Just plain dangerous behavior. I\’ve almost been hit 3 times in two weeks from these slow driving parents. They have GOT to watch out… I sure do…

I didn\’t grow up here, but my grade school and neighborhood was identical to Buckman and we had crossing guards. They were a group of older trained student volunteers that wore reflective gear and helped students to cross safely at each of the nearst dozen or so blocks to the school. Do they do that here?

sorry, I meant corners, not blocks.

Seems to me that they might want to start by actually yielding to pedestrians themselves. Lead by example you know?

I\’ve on more than a few occasions been at intersections and watched as the PPB goes blithely rolling by, and of course the cars around them see their actions as defining what needs to be done.

Seriously. If the cops just started yielding to pedestrians themselves, it\’d go a long way to informing the public about the law, and manners.

\”…[I]t would be nice if measures were taken to improve visibility at both marked and unmarked crosswalks.

Seriously. If the cops just started yielding to pedestrians themselves, it\’d go a long way to informing the public about the law, and manners.

Agreed again. I too have had this experience with the PPB. And Tri-Met.

I agree there needs to be some sort of enhanced crossing at this location. SE 16th is one of THE BEST north-south bike boulevards in the city, with the exception of the Burnside crossing.

At rush hour, it is virtually impossible to cross safely at this location, as there are no breaks in traffic.

Even a pedestrian refuge island in the median here (as has been done on Burnside further up, around 24th Ave I believe) would go a long, long way.

This project is indeed on hold for likely a couple of years because of a major sewer project that is going through the site.

Prior to finding out about the impending sewer project, we had begun analysis, outreach, and design work. The location is quite important because it is where a bike boulevard crosses a major street and is an important crossing for students at Buckman Elementary.

Our current design thinking would call for two median islands. This would serve both north- and southbound cyclists on the boulevard. Our goal would be to provide islands that are 10-feet deep to better accomodate people with bicycle trailers.

The process and design work is currently on hold because we would not be able to implement any recommendations prior to the sewer project. An additional goal is to coordinate with the sewer project so that any crossing enhancement can be installed when that project reconstructs the street upon the sewer project\’s completion.

It would be great to have lots of public participation on this project when it begins to move again. We\’ll keep BikePortland updated as the timeline becomes more clear.

Sounds like a job for police officers, plus car forfeiture with reduced due process for school zone speeders.

#13 Jeff My daughter goes to Sunnyside and I agree it is a nightmare at drop off and especially at pick up time. You only cover half the irresponsible and illegal issues I see daily. People parking facing the wrong direction and parked cars blocking sidewalks really bother me and create many unsafe situations. I sometimes try to remind people that for the safety of the community they might want to park safely a bit further away. I am usually responded to with rolled eyes or an unthankfull \”thanks\”. Over a year ago we discussed a police action (among other ideas to calm traffic around the school) near the school with officers warning drivers of illegal practices but it has never happened.

I commend Buckman students and staff for confronting this important issue and hope SES can follow there excellent example.

My Reply is to #13’s post. St. Marys School on South Ivy Street poses the very same safety issues you mentioned. Parking in crosswalk,blocking traffic flow and worse. South Ivy is narrow with cars parking on both sides of it. Only room for one car to drive through and this is at the main entrance to the building.

The a few blocks away South Medford high when classes are dismissed same issues. It’s a shame kids don’t get the safety they deserve.

It is now almost four years later, and crossing E Burnside at 16th Avenue is still scary. No progress has been made by the city, and there is an increasing number of Buckman students that would like to cross Burnside to walk to school. I hear there is a plan in the works connected to the 16th Ave Bike Blvd. I would like to know how to speed up this process!