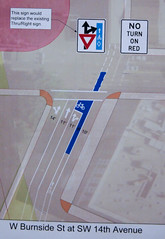 Draft engineering drawing
of the intersection where
Tracey Sparling was killed.

These improvements include new, colored bike boxes and bike lanes at intersections found to be dangerous and in need of immediate treatment by Transportation Commissioner Sam Adams. The safety measures were fast-tracked in light of two fatal collisions and one serious injury collision back in October.

Adams’ transportation policy staffer Roland Chlapowski says the $200,000 includes some “contingency money” that would be used if the current projects on the table end up costing more than expected. On the other hand, he said that, “If we don’t use up that money we’ll probably be able to squeeze more projects out of it.”

Chlapowski also said that he is working on a large, more policy-oriented package to take to City Council in the next few weeks. I’ll have more on that soon, but you can expect it to include potential new equipment regulations for city trucks and several recommendations around community policing and the policy and practices of the Police Bureau.

That makes me extremely happy, and I don\’t want to sound greedy but this is defenitely a good start. Hopefully the ball keeps rolling.

That\’s a nice start on Engineering.

Still looking forward to the City\’s action on Enforcement and Education.

I\’m still interested to know whether or not bicyclists will be allowed to turn right on red despite all the \”No Right on Red\” signs, here. Seems obvious that they should be able to but with the Traffic Division\’s record of ignoring the obvious as an excuse to ticket cyclists, this is clearly a trap in the making.

I think Greg Raisman had some ideas about how to make it clear, but I haven\’t seen \’em on paper yet.

Nice start here. for selfish reasons I\’m glad to see at least one intersection in outer SW on my commute get the Bike Box treatment (Terwilliger @ Taylors Fy). Not a month goes by that I don\’t dodge a right hook at that intersection, sometimes from drivers who\’ll *intentionally* cut off cyclists (and sometimes pedestrians).

\”I\’m still interested to know whether or not bicyclists will be allowed to turn right on red despite all the \”No Right on Red\” signs…how to make it clear..\”

all it would take is a simple \”Except bicycles\” at the bottom of each sign.

…Perhaps this is the silver lining to the recent traffic fatalities/ injuries and thus a legacy future Portland generations may speak about being the \’third\’ bike phase.

I hope that it works, but I\’m still a bit skeptical of the bike box concept.

IF cars stop behind the bike box, they won\’t be able to see traffic approaching from the left and that would effectively eliminate right turns on red.

I suspect though, that what will really happen is that cars will cheat up over the bike box so that they can see whether it is clear to turn right. At least, this is what often happens at crosswalks. At least in this case, the bicyclist would have a much clearer idea that the car is going to turn.

When possible, I\’d rather see the right lane as a right turn only and the bike lane diverted to the left of that lane. Probably not doable at 14th & Burnside though.

Oops! Didn\’t see the no turn on red sign. Hope that the cars do!

I encourage folks to drop our Council members a note to thank them for taking this action. Even just a sentence or two will help reinforce for them that the community supports cycling investments. Here are their addresses: