If all goes according to plan, PDOT’s Transportation Options division will launch a pilot of their “Sunday Parkways” event this summer; culminating a major effort they began working on last July.

At a steering committee meeting last night in North Portland they revealed more details about their plans, an update on their progress, and the new graphic for the event. 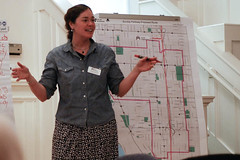 Janis McDonald of PDOT listens to ideas
from the steering committee last night.

Slated to happen on June 22 (in conjunction with the International Carfree Conference), Sunday Parkways will offer Portlanders a chance to stroll, pedal, and play on a six-mile loop of streets that will be closed to motor vehicle traffic from 8:00 am to 2:00 pm.

Inspired by a presentation at a biking and walking conference in 2006 and buoyed by the successful “Ciclovia” events in Bogota Colombia that get 1.5 million people out into the streets every Sunday (Bogota shuts down 70 miles of major roads for the event), the PDOT team hopes to someday turn this event into a regular, monthly (or even weekly) occurrence. 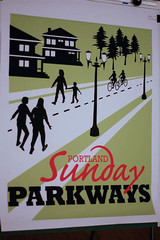 They heard PDOT Transportation Options staffer Rich Cassidy give more details on several facets of the event including: why they picked the route to go through North Portland (see map of the route here);

“North Portland was selected due to the lack of off-street paths in the area, relatively flat terrain, and great parks.”

more details on the route, 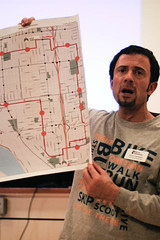 “It will be a circular, six-mile, two-way route that connects four parks — Overlook, Arbor Lodge, Peninsula, and Unthank — using “soft closures” allowing local access and using small barricades and volunteers at every intersection and Police will be on hand for the duration of the event at 13 major/signalized intersections. We tried to avoid churches and most of the route is on residential and neighborhood streets.”

“We have met with all five neighborhood associations on the route, and a long list of community groups and businesses. Many of them plan on tabling at the event.”

“The City has contacted several entertainers and many activities are planned throughout the route. We’ll have live music, hula-hooping, a kids circus, and much more. We’re looking for more zany ideas from the community.”

the need for volunteers,

“We estimate needing 400-500 volunteers to work this six-hour event. Most of them will be needed for street closure stations, but many others will be needed at the four parks and for clean up.”

how they plan to pay for it,

“The City has applied for a federal EPA grant for $100,000 [major sponsorship is coming from Fred Meyer and Kaiser Permanente]. Included in the grant is a City commitment to award funds to community groups to promote the event and to get involved.”

The PDOT team says everyone they’ve met with about the event is enthusiastic and supportive. The representative on the committee from Kaiser said, “This type of thing fits right into our community health initiative.”

Everything but through traffic?

That means that only people that live directly on the route will be able to get through the barricades. They will also be encouraged (through direct mail campaign) to not make any car trips that day unless absolutely necessary.

Sweet! My street is on the route!

Will there be rhumba lessons and aerobics classes for the hundreds like in Bogota?

Fantastic – and they chose my neck of the woods. Us NoPo Folk are so proud!

Actually – It goes RIGHT by my house on Willamette! I will have to stage some sort of fun in my front yard.

Yes – do plan that fun event! Just a quick correction and some added info. The Open Houses will be in February.

A \”soft closure\” means that
1) Residents along the route would have access to their driveways, and
2) Cross route traffic will be routed via detours to major traffic streets.

We are working on our traffic control plans over the next several months to make sure it work well for Parkway participants and residents along the route too.

Our plan is to have a nice crowded street with people biking, walking, rollerblading, strolling and just having fun.
Linda (with Transportation Options)

The soft closure seems like a good idea as long there is also a lower speed limit in effect during the event. I\’m sure there will be at least a few officers on the course to help enforce it.

It looks like the route goes past at least four or five Portland Parks and one \”greenspace\” (the grassy area west of Willamette Boulevard, overlooking Swan Island). I like the route!

Think of all the possibilities for riding to a neighborhood park on the \”Sunday Parkway\” for a picnic, games, yoga, tai chi, (whatever you want to do in a park on Sunday) with hardly any cars on your route. What a wonderful idea!

And what a great way to get \”interested but concerned\” Portlanders into cycling one day a week, on a day and a route when & where cycling will be perceived as being so much safer than normal!

I will admit to being a little naive about the money matters in an event like this. It takes $100,000 from the EPA and generous sponsorship from Freddie\’s and Kaiser to do what exactly – for a six hour event?

I understand that police and city employees who are working this event need to be paid – there\’s promotion and planning – signs, structures, entertainment… refreshments? I guess that could get up to a lot of money…

I don\’t think a hundred grand equals ten minutes in Iraq, in terms of gov\’t spending and all, so this seems like a great allocation of funds to me – and I\’m not naysaying – just curious where the money goes specifically.

Good luck with this but I worry about how the organizers plan to control the participants? If Bridge Pedal is any indication, that six miles will be packed with bikes. Throw in skaters, walkers, runners, etc. and there are bound to be some incidents. At the very least, people are going to complain that some bikes and skaters were going way too fast, cyclists will moan about gaggles of walkers six or eight abreast taking up half of the road, someone will down hard as an errant skateboard collides with their front wheel, several bikes get piled up because a biking family of five suddenly stops without warning to see some juggling clowns…

Fantastic idea. I just hope it can be executed well. I seen too many wrecks at Bridge Pedal and too much inattention or self-centered behavior from mixed users on the Springwater think this will all be sunshine and rainbows.

Maybe you could do a pit stop station, where people could pull up and you could water, feed, air up, decorate or add bar end tassles. As peole do sucessively more laps, the bikes would get more outlandish with each pass.

We should put a party together in the bowl!

Tons of fun to come.

hey, this is great, it will be on my street too and I couldn\’t be happier. I wish this route could be carfree every sunday.

Who needs Bridge Pedal if PDOT can pull this off more than once a year?

The only problem I see is with traffic control. A soft closure of roads sounds problematic. The route itself is a loop, so the number of residences affected is much larger than just those who reside on the streets being used for the ride. That adds considerably to the number of cars that have to be allowed on or across the route.

How exactly are residents going to be identified to be allowed to cross or drive on the route? Are people going to be taken at their word or will identification have to be provided?

Would an out and back route be better in terms of traffic control and safety?

Many community groups and businesses \”plan on tabling at the event.\” Is this a typo? If not, what does table mean as an intransitive verb? I already know what it means to chair at an event.

The concerns about fast bikes and traffic jams (8, 11, 14) suggest a \”course,\” perhaps even a \”winner.\” If the event felt less like a loop and more like a bunch of public space it might alleviate this problem. I have two suggestions. First, stop using the word route and use words like venue or identify named segments with distinct themes. Second, make any \”course\” ambiguous by adding an east-west street connecting it across the middle.

I\’ll definitely make my house a water and snack stop, fun, bike repair stuff and tubes etc. 2820 N Willamette will be a party rest stop and hang out, music etc. Spencer – are you referring to the dog run just up the street from me? The Bowl? That\’s a great spot as well. My front yard has the oversize grassy area after the sidewalk so it lends itself to a street party vibe wher folks can pull their bikes off the place where folks will be peddaling etc.
Love it. this is how we keep bikes, stakeboards walking, front and center.

In order to keep the conflict level low, how about a group CCC, BTA, ECT opt to host safe cycling clinics at one or two points on the loop. Encourage people to use signals, look before stopping or moving over, etc.
This would also help people gain the skills to ride on car-filled roads.

The St. Paul event was in its 13th year, and the Minneapolis tour was just inaugurated this year.

In St. Paul, the streets were really closed to motorized traffic and police and volunteers kept the bikes moving through intersections, overriding the red lights.

In Minneapolis, the police were a bit less charming; they seemed to be most interested in making sure that nobody rode faster than the squad car that led out the tour and in guaranteeing that all the bikes stopped for all the red lights. Minneapolis also didn\’t do as good a job of keeping cars off the route. (It ran through one area that isn\’t particularly bike-friendly; the circle parkway route has been blocked from completion there for many decades. They probably had to avoid antagonizing the locals if they wanted to continue the ride in the coming years.)

Very Cool! Totally from the Eug for this!

For more information on the Portland Sunday Parkways effort, visit this webpage:
http://www.portlandonline.com/transportation/index.cfm?c=46103

And in response to G.A.R.\’s question (#16), tabling is an outreach activity used by many non-profit organizations and by Transportation Options\’ staff as well. It refers to staffing an information table (such as you might see at a neighborhood street fair) in order to distribute brochures, answer questions, and get the word out.
Although I have chaired meetings, I generally don\’t sit when I\’m tabling.