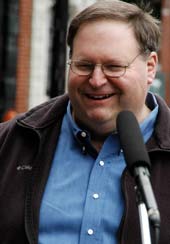 As I reported earlier this week, transportation and neighborhood activist Chris Smith has officially announced his candidacy for Portland City Council.

In case you hadn’t noticed, I plan to cover the upcoming political maneuvering as closely as possible. Not only do I think city politics will play a major role in the future of bicycles and transportation in Portland, but, as we learned back in April, the bike community must stay engaged with the plays and players in City Hall.

On that note, below is my interview with Chris Smith. I hope it gives you a better sense of who he is, what he stands for, and why I think it’s important for us all to pay close attention to the upcoming shifts in Portland’s political landscape.

Do you ride a bike regularly?

In my 30’s [he’s now 47] I cycled a lot more. I’m the veteran of two Cycle Oregons (4 and 6). At that time I was more of a “bike on top of car” recreational cyclist, although when training for Cycle Oregon I used to do my Portland-to-Wilsonville commute by bike once or twice a week (I got it down to about 1 hr, 20min for the 18 miles). These days of course I’m much more of a “transportation” cyclist.

I remember meeting your family at the Alice Toeclips Awards. What is your family transportation situation like?

I have a partner of 13 years, Staci Paley, and her two children, Christopher (19) and Alethea (17), live with us much of the time. We’re now almost car-free. We’ve transitioned over the years from two drivers and two cars to maintaining two cars as we added drivers 3 and 4 as the kids got their licenses, then dropped down to one car as the kids headed out for school.

A few months ago the last car blew its engine. We replaced it with a Kimco scooter (50cc, gets 80-100 mpg, although it’s a two-stroke, so the emissions aren’t great, but probably still better than an average car). It’s an experiment, and I suspect it might get replaced when the next generation of electric vehicles comes out. 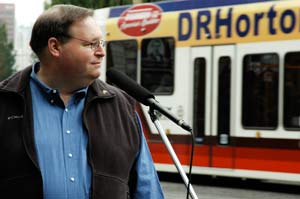 How long have you lived in Portland? Where do you live now?

I came to the region in 1988 and lived in Beaverton. I’ve lived in Northwest Portland for the past 17 years.

How will you balance your advocacy with being in public office? What will become of your blog?

I call myself a citizen activist…I’ve been focusing on transportation and I also do a lot of work on neighborhood issues, livability, and the umbrella topic of civic engagement, bureaucratic transparency, voter-owned elections, and so on. All of those would still be key issue areas and would keep working on them.

As for my blog? I imagine it will still exist in some form. Maybe like Sam’s; maybe others (contributors) will step up. I think PortlandTransport.com is an important place to connect community perspectives on different modes [of transportation].

Do you have a bicycle platform? If so, can you share some of your main ideas/ points about how we can continue to increase the use of bicycles in Portland?

I believe that bikes are the best return on investment that we can make on transportation. There are people who want to bike and will bike but they just need a safe environment to do it. We need to make that happen. I think we have interesting challenges around the rules under which we share the road; especially some of the issues with the Police Bureau.

We have a set of laws that doesn’t really understand bicycling yet. Each [legislative] session we try to make the laws better reflect bicycling, but we still have a gap. The laws of physics and the laws of the state don’t always match up. We should focus enforcement on things that are genuinely unsafe for anyone, rather than what is technically illegal.”

At a hearing for the Columbia River Crossing (CRC) project I heard you oppose the project and instead you said we should address “a systematic, network approach to our transportation system”. What do you think about where the CRC is headed now and will you continue to oppose this project as a commissioner?

“…it’s not a matter of forcing people out of their cars. What we need to do is create choices and an environment where people prefer those other choices over a single-occupancy vehicle.”

“During the campaign, the theme will be the topic of sustainability. I think global climate change may well be defining issue of our generation. Something like the CRC has huge implications for climate change…there are legitimate issues of bridge safety but to design something that will enable 50,000 more car trips a day is not a good thing for sustainability. If I’m Commissioner of Transportation, then I’ll be a member of the CRC task force [by default]. City Council itself may never officially weigh in on the project, but we have to ask ourselves, is this project a sustainable thing for our future?”

Are their other major projects you would like to play a role in (either for or against)?

“Anything that expands the bike network. The great thing about bikes is that its the highest ROI mode there is. Bike boulevards are absolutely the cheapest way to give people options beyond the single-occupancy vehicle. I’m generally for all the alternative modes.”

“I don’t have any expectations…but obviously if he asked me which bureaus I’d like to have, transportation would be at top of my list.”

If you do become Transportation Commissioner, are their any glaring transportation issues (physical or institutional) that you have an eye on rectifying?

“I think Sam is doing a good job with PDOT right now. I think it’s a question that there are a whole bunch of things we need to take to the next level. We’ve got bicycling increasing at a great clip, but we’ve got much more potential with the people that still don’t feel safe [the infamous “interested but concerned”]. Also with Streetcar, I think we’ve proven downtown that it can be effective and that it can spur the type of development that encourages walking and biking.” 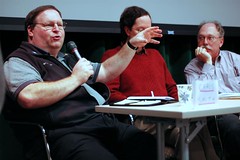 Smith at a panel discussion on the CRC project.

As a major player in the expansion of Streetcar, how will you make sure bikes don’t get left out of the conversation?

“One of the things I’ve been putting a lot of effort into is the question of, how can we integrate the streetcar and bicycle plans? Right now they’re not talking to each other directly. I’ve been trying to bring stakeholders from both sides to the table. If you look at both modes, the effort is on reducing single-occupancy vehicle trips. I hear bike advocates’ concerns of “how do we avoid tracks and bikes interfering with one another”. But if we take our thinking up a level, what are our common objectives?

One thing I’ve done is to pull the leaders together and encourage them to think together. I’m working with BAC [Bicycle Advisory Committiee] chair Mark Ginsberg to convene a joint subcommittee to bring these two things together. And, both policy documents (the Bike Master Plan and the Streetcar Master Plan) should have similar policy language. Those are some initial steps.”

Do you foresee ways to use your experience in getting funding for streetcar to get more money for bike projects?


“I think there area whole bunch of ways to approach that conversation. Funding is really about changing attitudes. In Oregon, we have a problem that the gas tax must pay for roads; it’s hard to shift that to bike-centric stuff due to construction limitations. in particular I think the ways we have funded rail; some of it is Private through Local Improvement Districts (LIDs), urban renewal funds, etc… 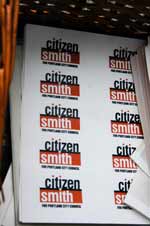 One piece of work we need to do is demonstrate the economic return of bicycling. We’re beginning to see businesses recognize that bicyclists and being bike-friendly are an important part of their marketing strategy. That can become a tool to leverage into a funding source. I think there’s a lot we can do… it’s about recognizing the value biking creates and then capturing some of that value to make more of it happen.”

Whether or not you win the election, are there transportation issues you hope to bring attention to during your campaign?

“The main thing is sustainability. I think that bicycling and streetcars are two of the big ways we can make transportation in Portland sustainable. Portland is already the leader in the country…but it’s next level kind of stuff we need to work on. And we shouldn’t leave out other modes. There are some places where MAX makes sense, and I think we’re shortchanging the riders who use the bus network; we also need to find a way to improve their experience.

We have to remember that it’s not a matter of forcing people out of their cars. What we need to do is create choices and an environment where people prefer those other choices over a single-occupancy vehicle.”

How do you define a sustainable transportation system?

“I think the two things we have to worry about are our carbon footprint and energy security. Fossil fuels are a limited resource and I think peak oil is a real concept. I’m not sure when it will happen, but it’s out there…you don’t take more out of the earth than you can replenish.. But on a more practical basis, can we, Portland, think of solutions to global warming and make them happen a local scale?

Transportation is one-third of greenhouse emissions. That’s the challenge for us. In Portland our reputation is to demonstrate the responsible way to approach these challenges and show other cities how to do it right. I think we have the opportunity to become prosperous by selling this expertise to other cities. We can use our green reputation as an economic development strategy.”

Any other closing thoughts?

“I think this is going to be great fun. My campaign is an opportunity for Portland to have a conversation about sustainable transportation. I helped get voter-owned elections adopted and it’s a critical part of our local politics… and it also means that I need 1,000, $5 contributions from voters. I hope to get a big chunk of those from the bike community.”

For more on Chris Smith, see this story in the Portland Mercury. You can also follow the latest news on his new campaign website/blog, CitizenSmith.us.

\”We should focus enforcement on things that are genuinely unsafe for anyone, rather than what is technically illegal.”

You said it, Gabe. Chris Smith for City Council!!

a bit of poetry…with apologies to the band XTC…

I won\’t believe what Chris has to sell.
Not Chris or Tom,
But maybe the Devil as well.
No pearly gates, no thorny crown.
They\’re always letting us cyclists down.
The cops you bring, the cyclist down.
Those lost on rides who hit the ground.
And it\’s the same the whole city \’round.
The hurt I see helps to compound,
that the Mayor, Comish\’ and Holy Ghost,
Is just somebody\’s unholy hoax,
And if they’re up there they\’ll perceive,
That my heart\’s here upon my sleeve.
For now, if there\’s one thing I don\’t believe in…

The numbers show this city\’s growth was built on cyclist\’s the last few years. Don’t let them use us!