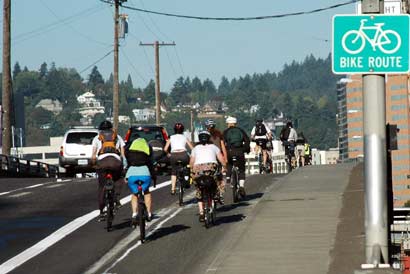 Cyclists now have more room to pass on the approach to the Hawthorne Bridge due to a newly installed ten-foot wide bike lane (faded stripe is the old lane).
(Photo: Jonathan Maus)

The new lane is now the widest in the city at 10 feet (!) and was created to facilitate easier and safer passing on an uphill portion of one of our most congested bikeways.

I was there with my camera for the morning rush-hour this morning and noticed that cyclists have immediately taken to the extra breathing room. In my photos (at right), you can see the where the old bike lane used to be.

The old bike lane stripe acts like a natural divider between slower and faster riders… it’s like a two-lane bike highway!

The new bike lane — which was made possible by narrowing and re-striping the motor vehicle lanes — begins just west of MLK Blvd. and continues to the top of the hill, where it narrows back down to six feet.

According to Greg Raisman of PDOT’s Community and Schools Traffic Safety Partnership (CSTSP) program, the project is “about 85% done.” Still to come are bike symbols and skip-striping that will go where the faded old lane is currently visible.

The project was identified and funded through the CSTSP program.

Have you ridden in it yet? If so, what do you think?

I commute across the Hawthorne daily. Love the 10-foot lane. It\’s always been a bottle-neck before, with cyclists (including myself, at times) giving into the car mentality of frustration/entitlement at the slower riders mucking up the start of the bridge. The 10-foot lane allows all levels of cyclist to feel more comfortable on their commute.

I rode it yesterday morning at about 9:30. Most of the traffic had died down by then, but it\’s nice to have a little extra breathing room from the automotive traffic.

I rarely ride during rush hour, but I\’m sure it\’ll help a lot.

i ride this way everyday and this adjustment was desperately needed and is soooo appreciated! now those who are faster on the hill don\’t have to cut into lanes of traffic and everyone can feel safer at this rat-race intersection. props out to those who made it happen!

I\’ve been waiting for this! I know what bridge I\’ll be riding over today… 🙂

It is great, thank you, thank you very much. I tend to stay \”with traffic\” on the bridge but at the ramp was sometime hard to follow slower riders and it is also tricky with the bus cutting the bike traffic when it start from the light.

…reminds me of when Kramer widened his lanes on his adopted highway stretch.

Although, Babs – it\’s not a \”car mentality of frustration/entitlement\” – more of a \”human\” one.

I\’m with Jessica (#5). To whom shall we send thank-you notes? I have some that I\’d like to address to whoever made the widened bike lane a reality.

I, too, ride this route everyday, sometimes multiple times trips per day. The wider lane makes a world of difference. It\’s so nice to not worry about cars while passing (using my new bell, of course, courtesy of the Bells on Bridges project), and I know that riders of all speeds will feel more comfortable now.

As for this topic of frustration surrounding bike traffic/slow-downs/jams as riders of all skill levels converge, I have a note for consideration: Next time folks begin to feel antsy behind a slower rider (I do know the feeling…), I encourage you to think about how wonderful it is that that person is riding- NOT driving- and how healthy it is for the individual and our environment, rather than feeling frustrated by what is really only one minute or so added to the commute home. After all, we want car drivers to be patient and courteous rather than cutting things close/passing hazardously when we’re slowing things slightly on roads/bridges that lack bike lanes.

It’s incredible to see how much bike traffic has multiplied these past 5 years. It makes me feel proud of our collective values, not frustrated…and it keeps me on my toes as far as bike handling practice in concerned (which I can always use more of)!

RE: who to thank.

I don\’t think any one person would be suitable to thank for this, but here are some names of folks who likely played a role in identifying, prioritizing, and then finding money to make this happen:

Does anyone know what the car lane widths were before they were restriped, and how wide they are now?

I\’m curious if this could be done in other places…

The eastbound bike lane on the east end of the Broadway Bridge is in desperate need of this same thing!!!

I was so happy to see this when I biked over the bridge on Tuesday afternoon, pulling my boys in the Burley. I\’ve always felt a bit nervous on that stretch with the trailer, not to mention hating that I\’m holding up faster cyclists as I slowly get started up the hill. So this is a huge improvement, and means I\’ll be much less hesitant to bike over the Hawthorne Bridge with the trailer from now on!

I thought Jeff Smith was the PDOT person behind this idea, not Greg Raisman.

Good! now mr. and ms. frustrated wannabe bike racers will get off everyones rear and have at it. Now if only we can slow them down on the esplenade during heavy traffic, we would be safer and happier. And you all know who you are.

I\’m sure many people had something to do with this project coming to fruition… that\’s why I encourage addressing any thoughts and thanks to the \”CSTSP Team\” rather than any one individual.

Greg/Roger/Jeff…how about adding a solid lane stripe where the old one was and placing a bike stencil in each and signing the outside lane as a slower hill climbing lane…this is a common treatment for motorized vehicles and could be a model for elsewhere. (And it might keep drivers from mistaking it as a car lane late at night/ rainy days.)

Keep up the great work.

Jonathan is correct that many people played a role in this project. I wound up being the project manager, but there were several others that contributed.

Some of note are Scott Batson who designed it. Will Stevens who manages small capital projects for CSTSP. Ian Cannon and Tony Lester from Multnomah County who worked with us on design details (it\’s actually a Mult. County facility). The PDOT Bureau of Maintenance for managing the actual installation. Jeff Smith, Roger Geller, Mark Ginsberg, the BAC, the Neighborhood District Coalitions who participated in the process of selecting CSTSP projects. The Mult. County Ped and Bike TAC for advice and input.

Of course, City Council was important for providing the mechanism to fund and move forward with projects like this one.

People should also know that this installation is not yet complete. It\’s about 85% complete. There is still skip striping that will go between the two lanes (so that cars don\’t mistaken it for a motor vehicle lane) and a couple additional bike lane symbols.

Thank you to all who pulled this off. It\’s great to feel like we deserve the extra width! I love being able to safely pass slower bikers, and I love sometimes being the slower biker. Let\’s keep this going, and make some other bike superhighways on other bike-heavy sections of our roads. I recommend this for the future 20\’s North-South route, not just at climbs but for the whole thing.

I just rode it for the first time tonight-woo hoo! Loved it, loved it, LOVED IT! I ride the HB probably 1-2X week, and I think it will make a huge difference in the congestion that often happens in that bit. Plus, anything that gives cyclists a bit more buffering from the cars that speed through there whilst trying to pedal up that hill is definitely a good thing. Thanks!

Jonathan;
I saw you snapping photos as I rode along this on opening day. You are SOOO on the ball everywhere. Kudos

AND BIG THANKS TO PDOT!!

Looks as if the rightmost car lane was slightly narrowed. Beware of unaware car drivers as of Tuesday/Wednesday when back to work and back to school car traffic will pick up. The lane layout could lead to right lane car traffic inadvertently entering the bike lane.

Re: the list of people it took to get this done.

No wonder it\’s such a pain to do things around here with a list like that just to re-paint a stripe and remove no auto capacity. God forbid we actually do diversion or anything radical, I would hate to see that list!

Can\’t wait \’til it\’s been there a few weeks to have the new striping firmly etched in the minds of all regular users of the bridge. I crossed the Hawthorne Bridge for the first time since the re-striping this evening to go to the last Flicks on the Bricks of the year (argh! didn\’t recall the 1989 version of Batman being so riddled with wooden performances!). Most motorists were minding the new striping, but I did observe a TriMet bus and a beaten-up old compact crossing the new stripe for a good ways, seemingly more in observance of the old striping than the new. Maybe habit\’s a contributing factor?

I adore this extra space. It makes the morning commute safer, easier, and more enjoyable for all. Many thanks to CSTSP! I\’m sure they solicited feedback from bikers in planning this, but I think we as a community should also take this opportunity to outline the issues at that intersection and how this solves them (or doesn\’t), so that we can help identify similar trouble spots around town. Jonathan, how can we can help and encourage the city with similar projects by giving constructive feedback on specific areas? Like Broadway just after the bridge on the eastside? Do you have a forum up for this kind of area specific info gathering?

The bike traffic at the Hawthorne and MLK light gets 10+ bikes deep around 8:50am, so when the light changes it can become a cluster of people racing to the front of the pack. With that many people hustling to work we\’re bound to ride at different speeds, and riding in a tight pack of different experience levels can be a dangerous situation in itself. I observed these issues:

The funneling effect of the bike pack squeezing into one lane made everyone slower, which often left the last bikers still in cross traffic when the light started to change.

Faster cyclists had to edge into the car lane to pass, which required looking over your shoulder, timing your pass, and making a move before the next car catches up. This was especially bad since cars often speed up to make it through the yellow and people going to work at 9am are bleary-eyed (bikers too) and slow to react.

The expanded bike lane has alleviated the above issues and generally made my morning commute happier and safer. Thanks all!