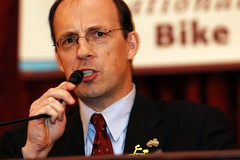 Andy Clarke, the Director of the League of American Bicyclists has issued a two-page letter in response to statements made by U.S. Secretary of Transportation Mary Peters on a television show last night.

In the letter (full text below), Clarke calls on Peters to stand by statements she made at the 2002 National Bike Summit and asks her to, “publicly correct the misleading impressions” she made about bicycling.

Here is the full text of the letter:

I listened with dismay to your recent interview on the MacNeil Lehrer Newshour, August 15 airing, on the subject of transportation funding and the Minneapolis bridge collapse. I was particularly taken aback by your comments related to the funding of bicycle projects in the United States.

1. Your statement that bicycle trails and paths are not “transportation-related” or “infrastructure” is baffling. I have been riding to work every day in Washington DC for almost 20 years on one of the regions many well-used bicycle paths, many of which have benefited from Federal transportation funding. Tens of millions of bicyclists and pedestrians in communities across the country use trails to get to work, school, shops, and to visit friends and family — and every one of these trips prevents congestion, pollution, and energy consumption while improving the health of the rider or walker.

3. You also left the impression that critical bridge projects are being left unfunded because of this. You did not point out the huge sums of money that states have been allocated for bridge projects over the years but they have failed to spend. Indeed, states have returned to Washington hundreds of millions of “unspent” bridge program dollars as part of recent rescissions ordered by the Congress.

I find it astonishing that, almost 20 years after the groundbreaking ISTEA legislation that created flexibility and allowed greater local input over Federal transportation funding, you would single out bicycle trails in this way. At a time when individuals, communities and as a nation we are battling congestion, obesity, energy consumption, global warming, and air quality issues, projects and programs to help people use alternatives to driving are a wise investment.

More than 40 percent of trips in urban areas in the this country are two miles or less; one quarter are just one mile or less and most of even these trips are made by car. I urge you to stand beside Congressman Oberstar, Congressman Blumenauer, and others in Congress who are attempting to efficiently and effectively unclog our highways by shifting some of these short, polluting car trips to healthier modes.

Secretary Peters, as Federal Highway Administrator you delivered remarks at the 2002 National Bike Summit that presented a much different view of the role bicycling can play in our national transportation system.

As you stated then, and I quote, “Many people in our country use bikes for more than recreation. For them, bikes are their vehicle for the commute to work and for the errands of daily life. We need every mode of transportation to keep America mobile. What modes did you use to get to your hotel? Very few of us depend on a single mode. I strongly agree with Secretary Mineta, bicyclists are an integral part of our nation’s transportation system and we all need to work together to develop a better more balanced transportation system that provides facilities and programs for bicyclists on a routine basis.”

Secretary Peters, I urge you to stand by your words in 2002, and publicly correct the misleading impressions regarding bicycling that you left with the viewers of the MacNeil Lehrer show.

I also wrote Secretary Peters (not nearly as eloquently as Mr Clarke, I\’m afraid). I would encourage others to follow the links and do the same.

I couldn\’t find an email address listed for her at the website above. Snail mail will get more attention:

The email address is displayed prominently on that site near the top of the page. But you\’re right, snail mail is given more credibility.

Mary Peters knows full well that bike infrastructure is transportation infrastructure just like the energy secretary knows that oil is shortsighted compared to other energy sources. Just like the FCC knows the fairness doctrine was actually more fair, just like Homeland Security knows their only enemy is peace.

How much more clear could it be that there is a Republican corporatist agenda that is opposed to the way the US was founded and how most Americans want to live?

You\’re right John, but we\’ve got to call \’em on it every time. The more often we are able to point out how ridiculous they are the less likely it is that they will be able to be re-elected.

Hopefully this letter from Andy Clarke will get some mainstream press and help bring a few more people to realize they can\’t keep voting republican if they want things to get better.

Mary Peters has barely 5 years experience with transportation at the Federal level, yet she\’s Secretary of Transportation of the United States. I find that laughable. Politics in Washington never changes.

And of course you\’re right Dave.

Jan, as evidence that national corporate priorities are controlling more than what car you (do)(don\’t) drive: 5 years is 3 more than the combined automotive industry experience of the heads of Ford, GM and Chrysler. Not kidding.

I had not heard Mary Peters 2002 words and I was shocked by the blatant statement she made on Lehrer\’s Newshour. How long will it take for her to recant or apologize to the bike community do you think?

Or Jim Oberstar. Or Eric Blumenauer.

An effort that would reap more results for cycling than writing to the Transportation Secretary.

Actually, bike path construction destroys wildlife habitat, so she is partially right, although for a different reason. The best way to promote bicycling is not by sacrificing wildlife, but by reducing motor vehicle traffic and giving bicyclists more of the existing road space. For example, we could easily remove motor vehicles from every other street, and devote them exclusively to bikes.

The US bike industry learned 70 years ago that every time a path is built, bike sales experience a temporary surge and a small long term increase in the area.

The League, in the hip pocket of the industry, supports paths.

So of course the industry yanked Andy Clarke\’s leash and the League reacts with shock and outrage at the Xpo Sec stating publicly what everyone knows: many of America\’s paths and trails – while they might be wonderful recreation facilites and generally improve quality of life – have nothing to do with t_r_a_n_s_p_o_r_t_a_t_i_o_n.

TCS #16,
And how did I, and many of my colleagues, t_r_a_n_s_p_o_r_t ourselves to work today? By b_i_c_y_c_l_e!!! And if you want to talk about being in the hip pocket of industry, lets look for the money. The money being made in the bike industry is barely a drop compared to the money being made by the automobile industry and the necessary construction to accomodate automobiles.

Side Note: It\’s \”The Newshour with Jim Lehrer\”, and has been since the mid 90\’s when Robert MacNeil retired.

I ride my 30 mile round trip to work (transportation, bike path and roads) but the last time I used my car and the highway system it was to go mountain biking (recreation). Go figure.

The federal highway administration doles out money (a pitance of the FHWA budget) for t-r-a-n-s-p-o-r-t-a-t-i-o-n enhancements (TE funds) that are the prime grant source of federal dollars to construct multi-use paths. Hence the FHWA is operating under a bikes-are-transportation policy, at least to a token degree, by virtue of this grant program (which is far from a wasteful use of money, for that we could examine the construction of I-69 in Indiana and a host of other superfluous highways).

It is hard to imagine that someone who never entered the work force until she was 36 and then as a secretary at that, was able to complete a degree at the \”prestigious\” University of Phoenix is now the Secretary of Transportation. Her rise to power even at the Arizona Department of Transportation is quite amazing. She really knew the right people.