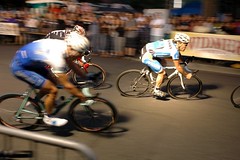 Bus mall construction has forced Portland’s premiere professional bike race to a new location. After five years of being held at the South Park Blocks (with a start/finish line in front of the Portland Art Museum), The Health Net Twilight Criterium will move to the North Park Blocks this year.

The event, which takes place on August 24th, draws thousands of spectators who watch top bike racers battle shoulder-to-shoulder around tight, dark corners for a shot at victory.


The news comes from Good Sport Promotions’ Ayleen Crotty. She says they’re excited about the new location because it allows them to retain the “360 viewing oasis and downtown atmosphere” that make the event so special. 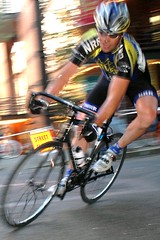 The new course will start and finish on NW 8th Ave. between Everett and Davis and will loop to 9th Avenue via Flanders and Couch.

Also new this year is the addition of a Category 3 race that will allow Category 2 level women to compete. In previous years, only Pro 1-2 and Masters men races were held.

I’ve watched this event the last two years (check out my reports and photos from 2006 and 2005) and it is an awesome spectacle. In addition to great racing, there’s live music, a beer garden, and an expo area.

Save the date…or if you’re fast enough to compete, good luck!

Sweet! I have heard a lot of great things about this race – looking forward to it! Crits scare the heck out of me but I guess a little adrenaline never hurt anybody now and then.
By the way, love the lighting in that first shot. Did you process that with a lighting effect or is that just straight up photographic mastery? 🙂

YES!
It\’s about time they let the ladies on the track.
Now the funnest crit to spectate is even funner.

don\’t think this new course will be a challenging as the old. No climbing and that left hand corner off of Broadway will be missed.

But the racing should still be great and provide new challenges.

It\’s a less technical course, for sure. It is similar to the o-l-d Mayor\’s Cup course (dating myself here), but it lacks the little rise that that course offered. True, it will be flat, but it will likely be a faster overall race, and just as much fun to watch.

Glad to see a women\’s race. That was overdue.