The Oregonian reports that the Portland Business Alliance has released their annual Downtown Business Census and Survey. The report focuses mostly on real estate and attitudes about downtown business issues, but it also includes a page titled, “How Downtown Employees Get to Work.” 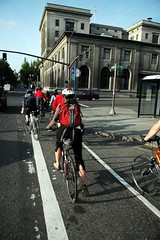 In that survey — which according to the Oregonian was done by “a separate research department using mailed questionnaires, with personal follow-up and block-by-block canvassing to obtain a 100 percent response rate” — they found that 5 percent of downtown employees ride their bikes to work, a one percent decline over 2005 (and the first year the number has dipped since they started keeping track in 2001).

As a comparison, 42 percent of respondents said they take MAX and/or bus and 44 percent drive alone (ouch).

It seems to me if more people lived where near where they worked, more of them would ride bikes. Seems simple enough. But one problem might be in the disparity between downtown housing options and the average downtown employee salary. According to this survey, 68 percent of the downtown workforce make less than $60,000 per year.

I’m no expert, but it seems like that isn’t enough to buy a new condo in the Pearl or on the South Waterfront.

Download the full PDF of the survey here (scroll to page 11) .

$60K is more than enough for an apartment in NW however. The bigger problem is that it’s probably hard to raise kids downtown. Quick: name three grocery stores east of I-405. Now name 3 schools.

I read somewhere that, nationaly, the higher salaries get, the longer commutes get. I wonder what percentage of people who live in all those new condos work downtown… I’m betting many commute elsewhere.

I agree with PJ. My wife and I have discussed living downtown several times. But we can’t seem to come up with an acceptable option that includes a place where our kids can play in a fenced in back yard–yes there could be adjustments made in that area with local parks etc…

As PJ said… it is hard to raise kids downtown.

Are there any readers who are raising / have raised / or were raised themselves downtown?

We live close-in southeast and both bike downtown every day. It takes in the neighborhood of 12 minutes.

I see plenty of houses for sale around here. Of course they arent hulking suburban monstrosities with 4 bedrooms and a swimming pool.

It seems like people want the biggest and most luxurious home for the money, not the most convenient, sustainable and practical.

How someone can’t live anywhere they want on 60k a year is beyond me..

I am one of only a few people in my downtown office to commute by bike, and one of the most common reactions when I tell people that I commute by bike is how dangerous it is.

If we want more people to commute by bike, we need to change this perception. How? I do not know.

I know how, John!

Take them on a bike ride. Become a commuting buddy. Help them buy a bike, show them the gear they need and take them on a guided ride from their home to work.

“How someone can’t live anywhere they want on 60k a year is beyond me..”

More likely they live well outside their means.

“68 percent of the downtown workforce make less than $60,000 per year. … it seems like that isn’t enough to buy a new condo in the Pearl or on the South Waterfront.”

Actually, the survey doesn’t say that at all – it says that salaries are less than $60k / year. That neglects non-salary income. Also, that’s income per individual. What’s the average household size in downtown?

Other interesting notes: single-car shows a 4% drop from 2005 (and same as 2004). There is a 4% increase in transit, and a 4% increase in Washington County residents who work downtown. Coincidence? Tri-Met’s ridership for the Yellow Line MAX in 2006 shows a 95% increase in ridership over the previous bus line it replaced. Maybe that’s part of the increase?

The more you make, the more you spend. Those car payments get awfully high, y’know.

Bummer about the 1% decrease. 5% seems low for a “bikey” town like Portland. In 2000, Palo Alto CA (the whole city) was 5.7% and is certainly higher than that now; Boulder was 6%. These are both college towns, granted.

I think we should forget about the surveys per se, and go with an actual-physical count. I know it’s impossible, but bike riders come out in the nicer weather, whereas true bike commuters are year ’round. And as far as salaries and living expenses go…beautiful house + great neighborhood + a couple newer cars = debt. Throw in a kid or two and ouch!!! Check your net worth now! You may want to start commuting by bike. (:

My wife and I live in the pearl. We don\’t own a car, and bike year round. There are lots and lots of families who live here. People all over the world raise kids in urban environments, and by far most don\’t have fenced in back yard. There are parks everywhere for kids, all within walking distance from the city center, alpha.., and inner east.

Once people move to a neighborhood that is livable (ie not a suburb) you find that you don\’t need all the things that you have been told that you need.