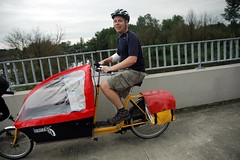 The Oregonian’s inPortland secion has a nice story today that will give a big boost to Portland’s awareness of and interest in bakfietsen (Dutch for “box bikes”).

The story focuses on how great the bikes are for kids and families, and even mentions a woman who uses one as a way to lose her post-pregnancy pounds,

“She knew the only way she could exercise would be to incorporate it into her day. Now she piles the kids into her bakfiets twice a day and rides to her daughter’s school and back.”

The article also says that June 1st will be the opening day for Clever Cycles, one of the first shops in the U.S. to sell the bikes.

My van is turning into “320,000 mile original toyota engine finally not passing DEQ” toast, and a bakfiet is on the brain as a replacement.
I am happy whenever someone gets on a bike instead of a car.
That said, I dont know how old the daughter is of the woman losing weight, but when my kids were 5 and 7 I had them both riding their own bikes behind me to their school, which was 2 miles each way.When we were all in yellow rain gear we looked like some happy ducks. The 5 year old had a teeny bike and had to peddle furiously, and she did it 4 times a day, as she was in half day kindergarten, and we would go back later to meet her brother.Cars gave us a wide berth whenever we were traveling together. The sooner kids get on bikes, the better, as far as I am concerned. Both my kids are avid cyclists, my son just finished bike mechanic school in Ashland, and he is racing now as well. I never had to schlepp them around anywhere in a car,(all those miles on the engine are from film tours)…they had their bikes and their riding skills I taught them, and when they were old enough, they made their trips on their own. I also lobbied for the school to get a bike rack (they had none), and got them one, and now I see there are 2 bike racks outside the school.

Vanessa, your story warms the cockles of my bikey heart.

I saw a bakfiets with kid cargo this morning while crossing Sandy and it made me so happy!

I know it’s been said before, and I hate to be a nitpicker, but education is always good: “Bakfiets” is singular (“bak”=box, “feits”=bike) and “Bakfietsen” would be the plural. We now return you to your regularly scheduled blogging.

so… are you saying to gramattically correct headlines would have been:

just to try and reduce the confusion?

I like nitpicking… just ask those that have to work with me every day. 😉

Since we all love sustainability..

The center for Appropriate Transport in Eugene has been making bikes very similar to these imports for years now. Right down the road in Eugene.

Where are the articles and praise for them?

I find that it’s easier to negotiate the singular/plural divide in the Netherlands where, for the most part, these bikes are simply called “cargobikes.” Exotic, eh?

If this keeps up Todd and Dean will sell all their stock before the shop opens 😉 Great article!

Scott: Absolutely! Those would be too grammatically accurate headlines. Actually, I was mostly trying to point out that there is no such thing as a “bakfiet”, unless that refers to a dance derived from the Moonwalk.

Val and Scott, there are typos in your posts. Steve, I disagree that the CAT bikes are “very similar,” particularly in their suitability for family applications. But then, a lot of people will say that a Dutch city bike is very similar to an old Schwinn, or even a Bianchi Milano.

You’re kidding yourself if you think that local micro-manufacture of bikes from largely imported components beats industrial-scale manufacture of bikes overseas in total resources consumed, emissions, etc., per bike. Volume manufacture is simply much more efficient. Per bike, the fuel used in freight from the Netherlands is probably comparable to what most US households spend on gas in a week (segue about emissions toll of domestic vs. foreign: did you know that sea freight from Asia uses less fuel than trucking from east of the Rockies?). And after just a couple of months, before we’re even open, there are nearly ten times as many bakfietsen replacing car trips on the streets of Portland than CAT has been able to supply to Portland in 15 or so years. Availability matters. Service matters. Returning calls and emails matters. Even marketing matters. CAT?

I think you’re right if you mean that ultimately, trade imbalance with manufacturing societies is not sustainable economically. I look forward with some perversity to when we simply can’t afford not to live more locally: it’s coming. Preparing for that time, to survive and prosper in it, requires culture change. I don’t have any qualms about importing bikes that can support that change, model a future beyond car culture.

Richard, we have only one bakfiets left from our first container. More coming.

Todd: You don’t like having the comma outside the quotations? I know it’s technically incorrect, but it makes more sense to me.

but much less sustainable, unfortunately. It’s efficiency that got us into this mess in the first place.

No current bicycle is sustainable. To be sustainable, they’d need to be manufactured with local resources, or shipped solely by renewable energy (like people or horses).

The only truly sustainable transport is walking barefoot.

I agree that in some cases, ordering from overseas is less environmentally damaging than ordering local. Unfortunately, it’s nearly impossible to accurately determine the total environmental cost in any operation since nearly every business relies on products from other businesses in order to operate.

Just let me know when you have the not-so-super-secret Stokemonkey ready for the bakfiets.

Or should I say Bakfietsensenssesseeses.

I know it’s bakfiets > bakfietsen because it’s Dutch but somehow it always kind of makes me think that hax0rs are involved (box > boxen). Which is kind of fun too.

I’ve been watching these bikes, sometimes with children payloads, cruising NE. They are a happy sight, but I want to caution owners: a box does not guarantee, or even enhance, safety in any way that I can see. Strap your children in and have them wear helmets, just like you would with a bike trailer.

but matt, what if the sustainable barefoot walkers eat kandy korn trucked in from pennsylvania? what if, instead, they are hunter-gatherers who hunt them some animals whose skins they turn into shoes. UNSUSTAINABLE!

the perfect is the enemy of the good.

Matt P- “1,000 shoemakers making shoes is sustainable.” I buy this argument for the “buy local” ideal, but at the same time I don’t on the enviro side. Keep in mind that 1000 shoemakers each need to have their own set of equipment (most of it very heavy) which has to be produced and shipped to them. Also, they would all end up sourcing their materials from non-local sources (even in the past 100 plus years of shoemaking this was the cas). While it is nice to have things locally made, it sometimes doesn’t work out for the better. All of the sewing and shoe repair supplies that we use at Mountain Soles for repair/alterations are not at all local. However, we do try to buy from local suppliers to hopefully keep the money in the Portland area. I think it is all about balance. If you can’t source the actual materials that make up a product locally, then try to buy from a locally owned business that will in turn support other local businesses.

I like what Todd and Dean are doing and I’ve read much of Todds blog over the last 6 months or so (and I’m starting to read his archive). I think that he is passionate about what he/they are doing, and in the long run it will make for more bikes and less cars on the road, especially as oil gets more expensive and less availible.

I appreciate your nitpicking. seriously.

And who says one person can’t make a difference. 🙂

I love it! Have a great weekend everybody. I gotta get outside and get on the bike!

Jonathan! I love the preview button! Thanks for adding this feature!