[The Vanilla Bicycles booth at the Handmade Bicycle Show.]

At last weekend’s Handmade Bicycle Show, Sacha White, the 32 year old builder behind Vanilla Bicycles, displayed much more than his superlative bikes. He showed us a part of himself. 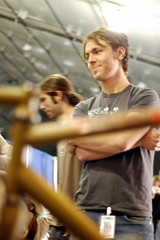 In a conscious move to share his Portland lifestyle with the world, Sacha put together a display that was more like a museum exhibit than a booth at a trade show. He also introduced everyone to his latest creation, the “Project Speedvagen” cyclocross bike.

Sacha’s booth and the Speedvagen represent a new direction for Vanilla Bicycles. Not a departure from their current path, just a side road that opens up new possibilities.

Welcoming you to the booth was Sacha’s now famous tricycle. He told me he didn’t plan on bringing it, but he thought it gave context to his newly unveiled poster, which features the trike being ridden by his daughter Delilah. 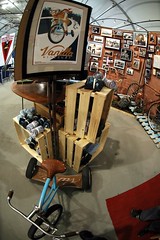 To the right of the trike was a display that featured a custom touring bike, similar to the one ridden by Vanilla customer Jordan Freeauf, in a just completed ride around the country. On a handcrafted wood pedestal next to the bike was Jordan’s ride journal, a jar for coffee, and a bottle of bourbon. 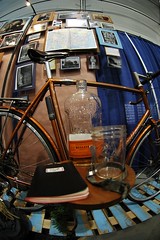 Above the bike were mementos from Jordan’s trip; a camping stub from North Carolina, a U.S.A. map, and black and white photos from the ride.

Taken together, all these details offered much more depth than the bike alone ever could.

Moving to the center of the booth, placed on curvy, wooden pedestals were artifacts from Sacha’s daily life both inside and outside his shop. There were unpainted parts, lugs, metal files, emery cloth, and a cup of espresso from Stumptown Coffee.

Directly above that were photos of his various passions: cyclocross racing, his dog Charlie, his favorite SE Portland locales, and his family (wife Caryn and daughters Cybelle, 7, and Delilah, 4). The black and white photos were shot by local artist Lyla Emery Reno.

Next to that display was the Speedvagen, a new project from the Vanilla Workshop (which includes assistants Ben and Scott) that in Sacha’s words is, “the ideal cyclocross racing machine.”

To get visitors in the Speedvagen mood, Sacha displayed photos of cyclocross racing by Brian Vernor. Vernor created the cyclocross documentary “Pure Sweet Hell” and also traveled with Vanilla Bicycles sponsored racer Molly Cameron to the World Championships in Belgium this year. Along with the photos, he installed a pedestal mounted speaker with a button (similar to a diorama at a museum). When pressed, it played audio of rabidly cheering cross racing fans. 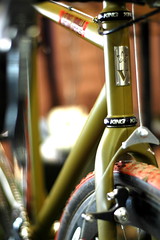 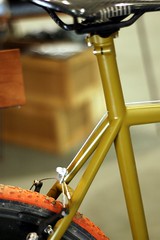 But the main attraction was the Speedvagen itself.

The Speedvagen is Sacha’s first attempt at a limited production model. There will only be 30 made in this style (ordering begins on April 1st). Each one comes with a custom fit and a limited color options. But besides that, the other options are not negotiable.

Instead of laboring and obsessing over each individual detail, Sacha is taking a new course with the Speedvagen. He says the bike is “based on years of input from my sponsored racers, and my feelings for what makes an ideal cross bike.”

And Sacha knows cross. He has raced it since 1998 and has sponsored top racers for many years.

I asked him to explain what makes the Speedvagen so special,

“With this bike, I got rid of everything that’s not necessary. There’s an integrated seatpost, no cable stops, and no cantilever bosses (which make the brakes lighter and stiffer). I’m also selecting custom tubesets for each one. We worked directly with our tubing manufacturers to deliver a proprietary ‘Vanilla SSL tubeset’.

The geometry has been dialed in over time from my own preferences and from team input.

With this bike, I’ve put in all the design and thought on the front end (of the process). It’s less about one-off details and hours of me whittling down a lug than my other bikes, and more about just making a badass tool for racing.

The Speedvagen is a way to stay connected with a scene (cyclocross) that is near and dear to my heart.” 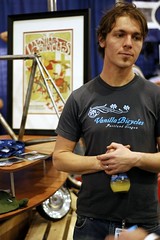 Unlike Sacha’s other bikes, the Speedvagen has a no frills paint job and his script “Vanilla” logo is absent from the downtube. This reinforces that this bike is a real departure from other, fully custom Vanillas.

With a current four-year order backlog, Sacha hopes the Speedvagen gives a “more accessible” option to folks who want a Vanilla.

There will only be 30 made and order applications will be available online at 8:00am on April 1st. All the bikes will be ready for the ’07 cross season.

Production is a challenge for small custom bike builders, especially ones with such a large following as Vanilla. Short runs like Project Speedvagen (combined with top-notch help from assistants) are one way to try and turn orders around more quickly (Joseph Ahearne is also experimenting with a “custom stock” model).

Vanilla Bicycles, along with several other Portland bike builders, are gaining national attention for their bikes and it will be interesting to see how each one deals with the challenges and opportunities that come their way.

=========
[Check out all my photos of Vanilla Bicycles at the Handmade Bicycle Show.]

Did the show have a prize for best booth? I will be in Portland next year, just to see what his display looks like, among other reasons to attend.

Any word on price? Is it one of those – if you have to ask, it’s too much – situtations?

4 year backlog now? Wow…I am really regretting not putting a deposit down when I had the chance (a couple years ago).

So, if there are no canti bosses, how are the cantis attached?

I saw this bike at the Cross Crusade. Essentially what Sacha’s doing is welding the part of the brake that would normally slide onto the boss directly to the bike.

I think that that is part of the “options are not negotiable” aspect. Paul’s Neo-Retros are what you get. That’s at least what I gather from looking at it and talking to him.

tonyt is right. They’re using a Paul brake and an extra long bushing to go through the frame (like tony said) and extend out into the brake itself.

There should also be credit given to Brian Vernor who’s cyclocross photos were displayed at the booth. He did the cx film, Pure Sweet Hell as well as a recent portrait show of cyclocross racers.

Thanks for the coverage and I hate to be a whiner but the fish eye is really distracting in a lot of the photos and makes it more about the fact that it’s done with a really wide angle lense than what the subject is. (to me)

Does anyone know how much the production Speedvagens are going to run? Also, will they be singlespeed as well?

Phil, we worked with Paul to machine a new version of the stainless bushing that the aluminum body of the brake rides on. The threads of the canti boss that the brake would normally attach to are now built into the bushing.

This design feature cuts quite a bit of weight, but the really cool thing about it is that the brake is now flush with the surface of the seatstay, which reduces flex in the braking system.

Scott, The cost for frame and fork will be around $3000. Bear in mind that each frame will be sized specifically for it’s owner, so it isn’t really a production frame.

Singlespeed vs.geared will be an option.

I am happy to answer any other questions about what makes this racing machine what it is, either here, or privately.

Thanks Jonathan for covering the show. I could not attend (I was in Florida),but wondered how the local boys did all weekend. With everyone talking about last minute paint jobs and stuff I am glad it all turned out well. Sacha’s booth photos [by you] are awesome. I had no idea what Sacha was going to do, and really find it gutsy to “let it all hang out” so to speak. I bet people were honored to see what makes the man tick, and gain history and focus behind his beautiful creations. Perfect, simply perfect.

Thanks for the info, Sacha. I was so impressed with what I saw at the NAHBS LAST year, I hated missing your booth this year.

Despite all the eye candy at the show, the speedvagen was mt personal fav. The attention to detail was evident to all those willing to look close. My hat is off to you Sacha for the most bauhaus cross bike i’ve ever seen. I’ve got my fingers crossed come april 1.

ps. any hints on geometry?