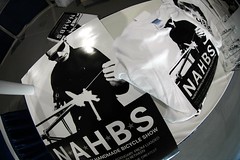 Ending five months of speculation and courting by City of Portland officials, Don Walker, founder of the North American Handmade Bicycle Show (NAHBS) just announced that the event will be in Portland next year on March February 7-10 at the Oregon Convention Center.

The announcement was made at the culmination of the third annual NAHBS in San Jose, California. 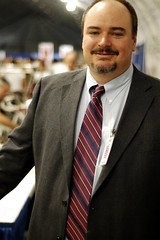 I spoke with Don a few minutes before the announcement and he said,

“Portland has been pursuing us since last September…and now they have really stepped up and basically said, ‘what can we do to help you.’ We had a few bumps in the road, but we overcame those and I am very excited about ’08.”

The saga of his decision started early last October, when the Portland Development Commission made clear their intentions of trying to lure Walker and his popular event.

Walker was ready to sign on the dotted line after a visit to Portland, but when Eurobike made their big announcement to hold a major bicycle trade show in Portland, Walker decided to walk away from his Portland plans.

Walker was “heartbroken” that he was not told about the Eurobike show plans (the company behind Eurobike did not manage their communications well). Walker wanted to be the only game in town so he looked for other options and was leaning toward Providence, Rhode Island as a possible host city.

Then, when Eurobike Portland was officially called off, Walker and Portland officials from the PDC, Commissioner Adams’ office, and the Portland Oregon Visitor’s Association re-entered negotiations.

Portland is a natural choice for the Handmade Bike Show. We have arguably the largest and most talented pool of custom bike builders in the country and a community that not only loves bikes, but also appreciates the do-it-yourself attitude and skilled craftsmanship of these builders.

Rumors have been swirling around the show all week that Portland would be next year’s location and ideas and plans are already taking shape.

It’s safe to say next year’s event will have a uniquely Portland flavor.

One thing is certain, whatever bar is the official watering hole will get a huge boost in business. Last night at the official hotel of this year’s show, the bar ran out of glasses and one bartender told me she “couldn’t pour fast enough for all the cyclists.”

This deserves a BEER or TWO tonight!!!!!!

this is very good news…
i’m very happy about this…
everybody should be very excited.

Is NAHBS open to the public? In other words, do they sell tickets to one and all? Or is it an insider-only event ala Interbike?

NAHBS is all about the public coming to see the bikes.

Yes, it’s open to the public. This year’s show had a $18 admission fee.

Wow — I was very excited to go to this. But if it is $18, um, you’ve got to be smoking something. I guess if they can get it, they will charge it. But damn that is crazy expensive.

For what you get to see $18 is cheap, last year I flew
from Nebraska, spent 3 nights, 9 meals, lots of beers
bought a pereira and still feel its worth it. Were
coming back next year.

But the concessions ought to be torched charging $3 for a soda (no ice).

After watching this show from afar these last two years I told myself “for sure in ’08!” And voila. The universe has spoken. ¡Hot damn tamale! This is great news.