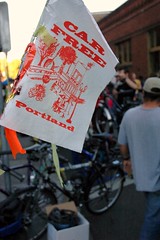 The city of Portland has been chosen to host the 2008 Towards Carfree Cities conference. The conference is a project of the World Carfree Network and it aims to “bring together people who are promoting practical alternatives to car dependence.”

Portland will be the first U.S. city to ever hold the conference.

Past conferences have been held in Lyon, Timisoara (Romania), Prague, Berlin, Budapest and Bogota. The 2007 conference will be held in Istanbul, Turkey.

[Last summer, a group of Portlanders
set up a living room in the street
during Last Thursday on Alberta.]

Spearheading Portland’s application for the conference was Elly Blue. Elly is a regular contributor to BikePortland and her first article ever was aptly titled, “Envisioning carfree streets.”

Elly made the announcement on the Portland Carfree Day email list and said:

“We got it! Congratulations to us! Some pizza and early-planning are in order pretty soon. This is going to be really, really fun.”

In the official announcement, Randall Ghent of the World Carfree Network listed several factors that influenced their decision to pick Portland. Among them were, “that Portland is a very dynamic city with a lot of inspiration and support to offer the conference, and in addition the ideas of the conference have a high probability of being applied there.”

Last September, Elly was one of the main organizers behind a local Car Free Day event that was held on Ankeny street in downtown Portland.

Elly, and her hard-working cohorts on the Portland Carfree email list also made some news over the summer when they set up coaches and tables in parking spots during the Last Thursday festivities on Alberta.

Congratulations to Elly and everyone else involved with this effort!

That totally rocks! Congrats everyone involved with CarFreeDay Portland!

I am excited. Good job!

That CarFreeDay website is sure entertaining, as well as educational. Thanks VJ – and thanks to all you road liberators for bringing the CFD conference to our bikey town!

Hooray! Good job Elly et al! Thanks for putting us on the Car Free map.

And also big thanks to Sara Stout for getting Portland CarFree going!

Thanks for the write-up, Jonathan! This is a really exciting opportunity for Portland to share ideas about transportation — and proximity — with people from all over the world.

I’d also like to point out that the name “Carfree” doesn’t necessarily mean demonizing or getting rid of all cars — it’s about what the word says, being free, and broadening people’s transportation choices.

We look forward to a great conference programme 🙂

I see the Big O just ran this as a breaking update on their web site this morning.

I´m here in Ecuador, and even in the diesel-fume-filled capitol of Quito, the mayor apparently decided that there should be a day for citizens to ride their bikes. So, every Sunday is car-free in the historic downtown, and twice a month they close down the entire downtown, plus a major north-south avenue, and several other streets around the city. And THOUSANDS of people were out riding bikes! It was magical!! Other than that we´ve only seen a couple of bicyclists every day.

PLEASE extend my personal thanks to everyone that has supported the effort to free themselves of the use of individuals using their own vehicles that do not car pool for work and social trips.

For 2008 international carfree Portland event may I present this slogan:

What happens in PORTLAND goes NATIONWIDE!

I attended CFD in Budapest in 2005. A good time. I would recommend getting lots of activists presenters to balance out the academic/professional presenters. In Portland I think you should be in a good position to do this.

peace in the spirit of bikefun.