Tonight is the big Last Thursday celebration on Alberta Street in Northeast Portland. If you head out there, here are two special happenings you don’t want to miss. 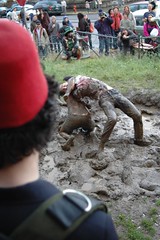 First, those kooky clowns at the famous Clownhouse on NE 25th and Alberta Streets are holding their first ever talent show. Dubbed “Shmanarchist Idol,” beginning at around 5:30 the clowns will offer their stage to anyone with a talent to share.

Contestants will be judged by yours truly (such an honor) and invited back for the final round competition at 8:00. There are some nice prizes including gift certificates from local businesses and of course a shot at stardom in front of hoardes of fans.

If you’re interested in being a part of Shmanarchist Idol, drop a line to Pinga da Clown at pinga[at]clownhouse.org.

Also, a fledgling group of carfree street advocates will set up for the second month in a row. The group—which is working to reclaim public space for people instead of motorized vehicles—plans to take over a few parking spaces to set up a living room. They’ll have snacks, couches, and friendly conversation to share.

They’ve got some exciting plans in the works, including an upcoming Carfree Street Fair, so stop by and find out the latest.

Should be a great night…hope to see you all there!

The Carfree Alliance will indeed be out tonight from about 5 – 10, providing cozy couches, snacks, and conversation about possibilities for making Last Thursday more pedestrian and bike friendly.

We’ll also have a couple of silkscreens with carfree themed designs, so bring your own clothes or walk away with one of our old bins t-shirts.

Other people are encouraged to reclaim and convert their own parking spots as well! Why wait to take back the street for people?

I signed my name on their petition! That would make Last Thursday even better, and the sidewalks hopefully less crowded. I saw many cars trying to make their way down Alberta. They obviously missed the signs that a detour was highly recommended. The Clownhouse was great, too! Karli