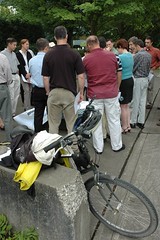 The event promotes bike commuting by encouraging companies to compete against each other to see who can get more employees riding to work.

The companies are separated into several categories and can track their progress via the event’s website. Winners are announced at a party in mid-October.

According to the BTA’s Michelle Poyourow, this year’s competition will be the biggest ever with companies from as far south as Ashland and “lots of growth” from Vancouver, Washington. 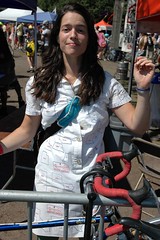 “It’s exciting to see such a diverse list of companies signed up…from the Portland Opera to the Vancouver Fire Department, everyone seems really energized this year.”

To stoke the flames, the BTA is running a radio ad during local traffic reports and Poyourow has been busy presenting Commuting Workshops to participating companies throughout the area. She’s done 15 of them so far and has many more planned. The workshops are open to the public and go over the basics of commuting including safety, laws, and route selection. Visit the BTA website for a list of upcoming workshops. 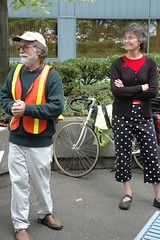 Yesterday on Swan Island, employees of Freightliner Corporation kicked off their participation in the event with a presentation by commuting expert Karen Frost and Swan Island transportation advocate Lenny Anderson.

Anderson says Freightliner has about 65 employees signed up and he’s hoping to boost that number to at least 90,

Despite intimidating route options, which Anderson says are, “fair to lousy, depending on how much you like cops, trucks and railroad tracks,” bike commuting at Freightliner is on the rise; last year they had only 48 participants in the challenge and they are currently expanding their locker room facility to encourage even more of their 1700 employees to bike to work.

So whether you’re a company of one or one-thousand, register now and join in on the fun and friendly competition.

The Bike Commute Challenge focuses on businesses? I think it is great that they are encouraging folks to bike to work, but I am a full time student, not an employee, and I think there ought to be a separate challenge, or at least a separate category (with it’s own registration form) for individuals. I’m just sayin’.
I AM participating, for the second year running, and shooting for zero car trips during the month of September. Made it all the way to Beaverton and back today sans car.

eeek, my comment was meant to begin: “Would it be awful of me to say that I feel a bit resentful about the extent to which the Bike Commute Challenge . . . .” sorry for the confusion

Griffin, it is not awful for you to feel resentful that the BCC doesn’t seem to offer a way to showcase or reward your commitment to bike commuting, but I think that their goal is not to “preach to the converted” like us but to try to get as many people to rethink their transportation options as possible, and trying to get businiesses to compete against each other is a proven method. I work for a large law firm,and of our 100+ employees, only four of us ride our bikes to work at all, let alone regularly. But te BCC offers me a way to try to convince my co-workers to try it at least once, in the spirit of competition. The hope is that they will become hooked . . .

Lots of schools enter the challenge. If you’re a student, you could enter your school or some subset (your department or class or major field, for example). Then use this challenge as an opportunity to encourage others in that group to try bicycling to school. You could even ask the student activities coordinator to see if there’s any money for prizes or enticements for people who try bicycling.