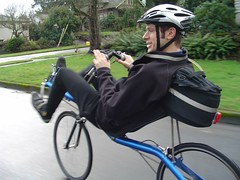 Michael Wolfe is an unabashed bike nut. About the only thing that gets him more excited than riding, is discovering and sharing new bike routes with others.

Last winter, he showed me a whole new perspective on the Sandy River when I joined him for my first-ever recumbent ride. Then, back in February I shared some of his favorite ways to escape the city by bike.

I like the way Michael thinks about routes because, like myself, he prefers to ride from the city (this guy is no car-topper) and he loves going long.

Last night I got word that he has just published on a new blog called The Long Haul where he’ll centralize his vast knowledge of great places to ride. So far, he’s posted three detailed accounts of some fantastic long rides. They all leave from central Portland and include detailed notes, links to photos, a Google Map, and a link to the route using the ever-helpful Gmap Pedometer tool.

“The goal is to build up a sort of reference for ambitious day riders or potential multi-day touring riders about what roads are bikeable, what some good routes to combine might be, etc.”

If you’re the adventurous type with a love of the open road, this is definitely a site worth bookmarking.

I am glad to see Michael publish the routes he has traveled. This guy is good with a map, I should know. We did some of the Oregon Randonneur rides together, and his knowledge of the roads surrounding Portland is astonishing. Like having a human GPS on a brevet (as long as you can keep up with him).

Wow — These are some crazy ambitious routes!

What kind of ‘bent is Michael riding in the picture? That’s one of the nicer ones I’ve seen, much sleeker and minimalistic than the typical 30-pounder…

Thanks everyone! It’s important to note that most of the long day single day rides that I put on the site would make equally fine 2 or 3 day loaded tours, where one could stop and smell the roses, go on the odd hike, etc. That approach would be more relaxing and wouldn’t require more athleticism than average.

In answer to Jeremy’s question, the bike I’m riding in Jonathan’s photo is a Challenge Seiran SL. It’s around 23 lbs, and it’s a bike that I no longer ride, actually — I replaced it with a Bacchetta Aero.

what a treasure! thanks Michael!

Feliz Navidad! I just wanted to wish Michael a Merry Christmas and I am glad he continues to ride his bike. He has been doing this since graduation from Portland State University. Hope to hear from you soon!!!