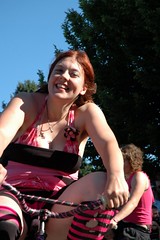 [You’d be happy too if you
were interviewed on NPR!]

A while back I reported that the Sprockettes were due to make an appearance on the nationally broadcast National Public Radio show Day-to-Day.

Even though I knew the reporter had been in Portland to get the story, I have worked in PR and I realize you never know if a story will actually run until it does.

So I’ve been checking the web daily and lo and behold The Sprockettes made it on the show today! And they even link to one of my Sprockette photos on Flickr (which I have now modified for the occassion;-)).

The audio from the show has just been published too, so go on over and check it out:

Stunt Biking with the Sprockettes – by Phyllis Fletcher

Congrats to the Sprockettes on your burgeoning fame!

That is really cool that they are on NPR. But I thought they were Portland…in the news report they said that they were from Seattle.

NPR says Sprockettes are from Seattle???

Yeah, I was bummed about that too.

But to answer your question…the Sprockettes are definitely from Portland!

last time i checked, we were definately from portland…..

my computer won’t play the broadcast though (sad)…. does anyone have a recording?

I really hope you “unedit” that photo after the rush from NPR is over. Now I am curious.

Just to clarify, I didn’t edit the photo that NPR is linking to. I just added some links and a nice greeting in the description ;-).

Haha. I saw that picture you attached to this story, saw the black band across it and thought you edited out cleavage. LOL. I see now that it is part of the uniforum.