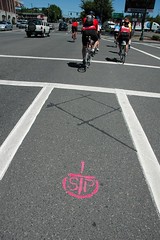 Yesterday thousands of cyclists rolled down Highway 30, crossed the Broadway Bridge and rolled into Holladay Park near the Lloyd Center. The occassion was the 27th annual pedaling pilgrammage known as the STP or, Seattle-to-Portland bike ride.

Organized by Cascade Bicycle Club, STP has become an institution for thousands of Northwest cyclists.

From what I heard it was a near-perfect event. The weather cooperated and so did a nice, northerly wind all the way from Seattle.

Local cyclist and photographer Dat Nguyen was among the finishers. It was his third time doing the ride. Check out his photos from the road. 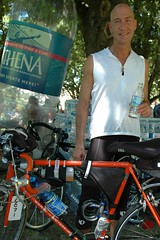 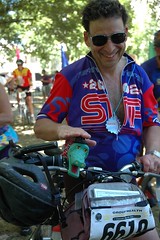 Dat was on his nice, carbon-fiber Orbea road bike but you don’t need a high-end bike to make the 206 mile, two-day trek.

Take Ty Metsker for instance. Ty was rollin’ with this classic Schwinn World Voyager 10-speed. He picked it up a few weeks from the Goodwill for just $9.99. It was a tough haul for Ty (the palms of his hands were bruised and his knees “gave out” several times) but he pressed on.

I asked him why he decided to do STP on a whim and he said, “I just turned 50 and it’s been a goal for a long time.” Congratulations Ty, I hope I’m as tough as you when I’m 50.

For others, the STP is as much a social event as a physical test. I saw tons of grassroots team jerseys, including a colorful, tye-died crew that called themsevles the “Grateful Peds“.

It’s also a ride that caters to everyone. I saw people of all shapes, sizes, and ages. This kid looked serious, but was probably barely a teenager. On the other hand was Alan Bunin. He and his friend Alex have been doing STP since the early ’90s. They told me their combined age was 133 but judging from this sign on the back of Alan’s bike, he’s still got plenty of kick in those legs.

I heard about a guy doing it on a skateboard, a unicycle and even a modified Big Wheel! Yes, I’m not sure if this guy completed the ride, but Matt Picio sent me a photo as proof of the craziness:

By the end of the day, I was kicking myself for not doing the ride. Next year, next year.

[Check out the rest of my photos from Holladay Park and don’t miss Matt’s photos from the road.]

Yup, good time! Finished the one-day ride a little after seven on Saturday. Weather couldn’t have been better – cool and cloudy all morning, then a sweet 8mph tailwind all the way down route 30.

Indeed, passed a guy on a skateboard, headed all the way to Portland. Craziness!

That was probably the funnest double-century weekend I’ve ever had. I usually have to ride solo, but hanging with my buddies was tops.

I rode STP last year, and the above Big Wheel rider was there, with another friend riding the same set-up. I saw them only twice on the first day, but heard the load thundering roll of their wheels coming into camp later that night.

StP was awesome! The Big Wheel did indeed complete day one – I got a picture (not posted yet) of him passing the World’s Largest Egg in Winlock on the morning of day two.

Before this year, the furthest I’d ever ridden was 50 miles – 10 years ago. I did 35, 45, and 70 mile training rides early this year, and 100 miles in late March and in June. I’ve never done back-to-back century rides, and this was the most awesome experience I’ve ever had. The weather was gorgeous (other than the 45 degree start to day 2 – really glad to have that Tyvek jacket), and the route was a lot of fun. The Lewis & Clark bridge wasn’t half as scary as I was led to believe, and coming down the other side was a lot of fun.

The one thing I did notice, though, was that I never heard a car honk (angry honk, that is) at a cyclist in Washington State, but it started happening with depressing regularity once we crossed into Oregon. I really hope that we as cyclists can encourage everyone to have a healthier attitude towards cyclists, and consider becoming one themselves.

I love forward to riding StP 2007. Jonathan, I hope you can make it next year!

Ty Metsker, on the World Voyager

Just do it Jonathan! RIDE! “No matter what” spirit building at it’s best. Sorry know this is long, but hoping it encourages other who havent’t done it yet.

Kinda tired & not yet back up to speed with my body & mind. My knees totally gave out at the 80mile mark, then my back, then my mind… oh did I mention my butt! Stopped, took an extra strength Tylenol & put on some knee supports &
continued, staying in Castle Rock Saturday night, a 139 miles from Seattle. Wished I could have worn the supports full time but they rub my inner knees raw when I wear cycling.

At mile 81, I was done, & was thinking about how to get back home. I even left an emergency car key for my son should I not make it, though I did not tell him. Every edge to fight the “unknown” fear & doubt. Mile 82 was the worst, & yet mile 83 I was still pedaling.

But I left myself little choice to continue, since Castle Rock was where I chose my tent, sleeping bag & clothes were to be dropped off that morning before I left Seattle.

Sunday started out ok, but became grueling right away after the first steep hill up & over the Hwy30 bridge into Portland was about a mile long. I finished the last 10miles on my right leg, after taking two more extra strength Advil’s like 3blocks away from he finish line.

This was so much more about a mental then a physical challenge to me, in spite of the snow skiing injury to both my knees in May. So I never got to do my ride training… I tried,
but re-injured both knees again.

I never got more then a 50 mile day in the five or six days I trained for this ride. And I couldn’t get anymore then 30miles in on the one “second day” training I tried to fit in
before the actual ride, before my knees gave out last Saturday, a week ago. I didn’t get back on the bike until the day of the ride.

I am really no worse from the wear, but I know something more about myself.

And, lol, I am very proud of my little “Finisher” necklace patch souvenir.

Oh & to finish off the challenge, the Bus ride home was 5long hrs, because of traffic, then my bike was an hour behind that, so I, with some others helped unload 200 bikes while waiting… even that was fun after doing something so beyond my recognized ability.

oh, but won’t see u next year, one of my other goals was Mt Rainier, happening at the same time… but maybe I’ll see u going by! Thanks!

My first STP. Our group finished strong with a 19.8 average. Almost made goal of a 10 hour double. The camaraderie was unmatched.

A great part about riding in the STP is all the postive energy we receive from non-riders. Police wave us through intersections, townfolk egg us on, the GoldWing motorcycle club provides roadside assistance and bridge escorts, sponsors feed us, and a cheering mob greets us at the finish line.

Hi,
Im that crazy big wheelin guy you got a picture of, unforntunatly i could not complete all of the cource this year becasue one of my rear tires caught a flat. at one of the last stops on the first day, i noticed a crack in the right tire and i put some duct tape on it so help slow the breaking but it grew worse and worse on the second day and more and more duct tape had to be applied and it was slowing me down alot. after i finished the bridge me and my buddy hung out at the gas station after the turn and one of the suport vehicals came up and informed us that we were the last people on the cource, and that they wanted to boost us up a ways. so we rode from the bridge to the scappoose stop and finished the ride from there. by the end my tire was extreamly messed up. i will get some pictures up so you guys can see how bad i was. but i made it about 170 miles and didnt walk up any hills. well, i dont know if ill ride the big wheel again next year but ill definatley ride something odd. And i you have any good pictures please email the to me at GT_44@hotmail.com.

Check these two shots out of you on your big wheel. This is at the REI stop which I think was about 45 miles in.