The Bike Gallery dusted off some BMX memorabilia for their Bucks for BMX movie benefit. Held last night at the Bagdad Theater in Southeast Portland, the event was a fundraiser for the soon-to-be constructed Glenhaven Skate and BMX Park. 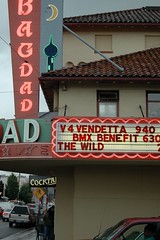 It just so happens that Bike Gallery owner Jay Graves was a big BMX racer himself back in the 70’s and 80’s. There was a mini-BMX museum on display in the lobby of the theater and Jay took me around on an informal tour. As he ate a slice of pizza he told me about some of the bikes he raced on back in the old days.

Jay is such a nice, unassuming guy, it’s hard to picture him as a cutthroat competitor flying through a racetrack. But it’s true. Check out this little historical write-up on his BMX past if you don’t believe it. 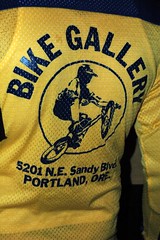 Also on display was Jay’s old racing uniform (including some vintage, tight leather pants) and some of his old trophies. One guy even had the uniform on complete with period Vans slip-ons.

The hot item of the night were these very cool T-shirts with the old Bike Gallery BMX team logo.

I’m sure they’ll raise a ton of money for the new BMX park. Stay tuned for more developments as construction begins.

The movie was great! The history of BMXing is very fascinating. And to see Jay race as a kid was the perfect touch. Thank you BG for once again supporting our community!

Whoa! The movie was super-cool, no doubt, but the total, complete, absolute, swervy-curvy mouth-dropping highlight of the eve. had to be the vid about Jay Graves rippin’ it up wild-style on the BMX track.

who’da guessed that JG was once a leather-clad killah?