Pedalpalooza debuted in grand style at last night’s Kickoff Parade. No one got an official count but I’d guess somewhere around 150-200 people showed up. 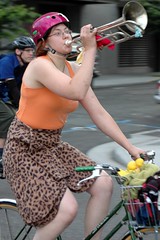 The scene at Jamison Square in Northwest Portland was like a bike carnival. SCRAP provided plenty of decorations (even though most people showed up fully decked out already) and there was even live music.

The bikes and the people were as beautiful and wacky as ever.

Justa looked especially dashing astride her unicorn, but she wasn’t the only one with a four-legged companion. And what about these companions? Strange. 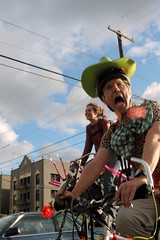 Speaking of companions, it was great to see all the families in this year’s parade.

I loved this guy’s Bike Friday tandem with a child seat. These folks preferred the tag-along style while the Folz Family had Cody tucked under a farmer’s hat they’ve integrated into his child seat.

Some kids are a little more advanced. This little girl was riding her tag-along backwards and this fearless mama was pulling her little daughter along, making her the smallest rider of the night. 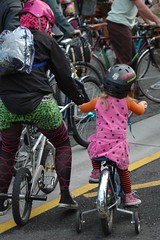 But if you think that’s the smallest bike of the night…think again. That award would go to this guy.

Check out Sprockette Lauren (a.k.a. Agent Lapis) blowing her horn while riding her xylophone-barred Schwinn. Or what about Bethany and this thing? At first I thought it was a huge flask, but it’s some sort of accordian/keyboard/horn thingy. This guy was also belting out some good tunes.

If you think playing a horn while riding is tough…how about riding high atop a tall bike and taking photos at the same time. Or, tougher yet, how about riding a tall bike with no hands at all (and while blowing a whistle!). By the way, those two talented tall-bikers are none other than recently married Morgan and Carol (AKA Roadkill Racoon and Reddish Raddish).

Paul Van Orden showed up, fresh from a trip back east. He’s the guy I profiled here on BikePortland.org when he ran as a write-in candidate for Multnomah County Sheriff in the recent elections (he did great by the way).

And hey, it’s Karl Benedek, editor of Oregon Cycling Magazine. He made the trip up from Eugene to get a taste of Portland bike fun.

Finally, I leave you with Gabriel Amadeus; Zoobomber, artist, and all-around neat guy. Check out his flamingo pink, D.I.Y. style, three-wheeled, bucket seat, twin-flagged, mini-bike chopper. And he topped it off with this cool pink cape.

Eventually we all massed for the start and enjoyed a police escort through the streets of Portland.

Bethany is playing a melodica.

Great parade! It was really cool to watch all the pedestrians, drivers and folks stuck inside buildings who laughed and waved as we went by.

And awesome work by the police department making the whole thing run smoothly.

It was indeed a lot of fun. I agree, the Portland Police Department did a really great job! Watching the motorcycle cops racing all over the place to escort us was pretty cool.

I couldn’t agree more– the cops did a great job as escorts. It was totally crazy to see them tear up and down the sidewalks the way they did.

What a great ride!

Joanna Dyer should confirm this, but she mentioned doing a head count at the start and coming up with a number of riders in the high 190’s. So she figured we were probably just over 200 riders with anybody she missed.
Go Pedalpalooza!

…and for those who don’t habitually check Flickr for photos of every event they attend, here are a bunch more photos of the parade:

It seemed like the cops were having a great time.

By the way, did anyone notice moderately-famous stand-up comedian Bobby Slayton walking down the street as we went by? He had a look on his face that could best be described as “Only in Portland.”

Love me or hate me for trying to talk to the Police but here is something that comes up at the monthly Critical Mass / Local Government meetings.

A few times we have expressed our concerns about ‘Motorcycle Officers’ on permitted events. Last year after the memorial ride we asked the Traffic Division why the motorcycles were always speeding to the front of the ride. They explained that they have to ‘leap frog’ all permitted events to the the streets shut off ahead. Primarily it is a logistical and manning situation.

Then a discussion started to see if there was a way that they could accomplish this in a way that was considerate of bicycle riders. The biggest reason was that the noise and acceleration is very disturbing and/or frightening to most riders. We explained that we are not in a car with our stereos turned up and the noises they make are very loud.

It was really nice to see the PPB modify their use of motorcycles in how they escort permitted bicycle events.

The coolest thing I heard yesterday was one motorcycle officer politely saying ‘On your Left’ over his PA. As opposed to the confusing ‘Whoop Whoop’ siren noise.

The meetings happen are every month and open to everyone.

Great parade, indeed! Had a lot a fun, but my perspective about the cops is different:

1- motorized vehicles in a bike parade are totally unnecessary; if it’s to hard for them, I’m pretty sure people from our bike community could do the job pretty well on real bikes.

2- they were noisy with their sirenes; we can make our own noise.

3- their riding on the sidewalks and through the parade was not as safe as I would like them to be. Again, they were riding motorized vehicles on places reserved for pedestrian and bicyclists (since we ha a permit, those streets were for us to ride bikes), and were speeding and riding very agressively.

Of course, that didn’t ruin the parade, ’cause we are much better than that, but I just don’t like to pretend that some things couldn’t have gone better.

it was amazing two-thirds of the way through the ride when all us instrumentalists (pocket trumpet, slide whistle and my don’t-really-know-how-to-play valve trombone) got together and had a mobile band.

it is true that i counted 190 at the start which i’m sure grew to over 200 by the end. nothing like throwing together a parade in less than a week. thanks to everyone that helped put it together and everyone that came out!