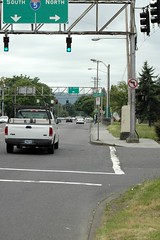 Savvy activists Shamus Lynsky and Shayna Rehberg, working closely with Roger Geller and the Portland Bicycle Advisory Committee, applied for some of this funding and I’ve just gotten the word from ODOT that their project has been approved!


“Everything looks good…unless we come across an unexpected hiccup in the cost estimates we plan to move forward with this project. We’re working with PDOT to coordinate efforts and make sure everything goes smoothly.”

This project (detailed plans below) will bring much needed improvements to a dangerous stretch of Portland Blvd., between Vancouver and Montana Avenues.

Portland Blvd. is a high-speed street and this stretch includes four freeway ramps and a dangerously awkward intersection just west of I-5. Also, this stretch of road is a primary route for neighborhood to access the new New Seasons Market and other businesses at Portland and Interstate Blvds.

The project cost is estimated at $90,000 and would go toward striping new bike lanes (which will narrow motor vehicle lanes), installing curb ramps, and a bike-only traffic signal.

Shamus and Shayna deserve our gratitude for their hard work and they are a great reminder of how all of us can make a difference for traffic safety in our neighborhoods.

God I hate the bikers, what taxs are they paying that deserves more of the road? Bild more roads for what they are supposed to be used for, being driven on by cars.

I wish the trolls would spend a little more time constructing a proper inflammatory post. What a bore.

By the way, any cyclist who has a job and pays taxes, especially property owners, subsidizes infrastructure for motorists, not the other way around.

Cyclists, never let the car-dependents get away with spreading this myth. Tell them that if all the costs of transportation infrastructure were paid by them, either it would cost another two to seven bucks per gallon for gas, or it would cost many thousands of dollars to register a motor vehicle. The range is quite a bit, depending on what “costs” are considered, which can include military support to maintain imports, and increased health care costs due to illnesses caused by automobile pollution.