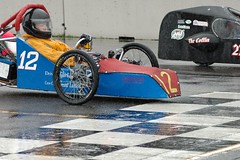 On Saturday I went out to Portland International Raceway to check out the annual Human Powered Challenge.

I ended up catching a bit of the Electric Vehicle races and recumbent sprints. Unfortunately rain dampened spirits just a bit…but not enough to keep the diehard HPVers from competing. 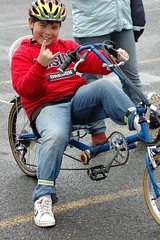 I met this cool kid named Henry Cobb from Gresham. He was there with his family, racing a recumbent for the first time. He may look like a cute little kid, but out on the course he’s a real terror…pumping his pedals and rocking his ‘bent side-to-side.

I also met Sherman Coventry, owner of Coventry Cycle Works on SE Hawthorne Blvd. Coventry is known as the recumbent headquarters in Portland. Sherman has been a long-time supporter of this event and he was the honorary checkered flag holder during the sprints. 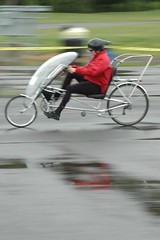 Of all the cycling sub-cultures, the HPV crowd are the most accepting. They’re like the melting pot of bike groups. There was a huge range of vehicles on hand and they all seemed to just intermingle.

There were all types of recumbents at the event including; a carbon-fiber, fully-faired trike from Portland State University (the “Vike Trike”), a do-it-yourself special, and then there was this bike. Not sure how he fit in, but no one seemed to care too much.

Here’s more about the IHPV Challenge with more links and pictures.

There’s also a downloadable video created by Tim who came with us on the Exchange Cycle Tour
http://groups.yahoo.com/group/ExchangeCycleTours/message/153

Okay here’s the correct link to the article