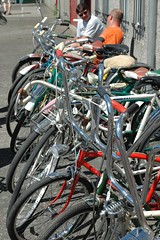 Last Sunday was Dumpster Dave’s Bike Swap Meet at Free Geek in Southeast Portland. The sun was hot and the so were the deals. There were all sorts of crazy bikes and interesting people on display.

I set up a table and joined the fray alongside Joe Biel of Microcosm Publishing. I saw lots of old friends including Sacha and Ben from Vanilla Bicycles. Sacha has an amazing limited edition poster that I hope to share with you soon. 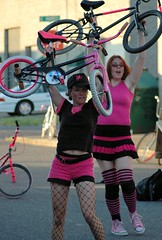 There was even some tasty Swap Meat being served up.

It was a good turnout and from the looks of this photo, I think Dumpster Dave was pretty happy with how things went.

The highlight of the day was seeing the Sprockettes perform. They’ve got their own sound system now so they can rock it whenever and wherever they please. And rumor has it that they want to do a summer camp for girls. My little one will be first on the list. 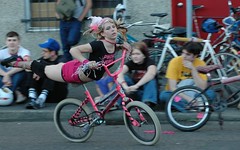 [I have hope for the world when
I look at this photo!]

At the end of their performance, they got everyone out dancing in the streets. It was glorious.

For more fun photos of the Sprockettes and Swap Meet action, check out this gallery.

Dave did an awesome job! We need more bike parties in the street.

Jonathan – I guess you didn’t stay for the dance party. I stopped back on my way to ZooBomb and caught Show Me The Pink. They rocked!

It was awesome! Summer started mid-May and the bike fun is going full speed!
Johnny Punchlock and Show Me the Pink rocked hard after the Sprockettes. I missed the last band ’cause I had to go to church (Zoobomb, that is).
Dumpster, that was the shit! Keep on the good work!

Hey, does anyone know if the guy with the Bontrager race x lite wheels for sale still has them? Or how I can get a hold of him?

Hey, how does your bike swap work? I’m picturing someone wanting to swap their $400 bike for my $4000 bike, getting into a big argument and everyone leaving mad. So how does it work?