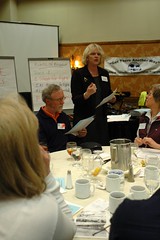 Last Saturday 150 people filled the Eugene Hilton to share ideas and learn more about an effort to establish Oregon as the top cycling destination in the country. The participants came from every corner of the state and ranged from politicians, bike shop owners, bike industry entrepreneurs, and at least one “BMX mom”.

The event was emceed by Bike Gallery owner Jay Graves and he got things off to an inspirational start by having each person stand up and introduce themselves. From that moment on, it was clear that this summit will go down as a seminal moment in the history of bicycle tourism in Oregon.

Following Jay was the elegant and eloquent John Blackwell. Now here’s someone with an engaging perspective of cycling in Oregon. A self-described Francophile, Blackwell said in order to succeed as a bicycle-friendly state we must first, “nurture a culture of civility” on our roads so we can be like France where a cyclists can “ride with impunity through country roads and paths.” He managed to pull off references to Zoobomb, Cycle Oregon, and a book called, “Two Wheels North” about two guys who rode up the Oregon Coast in 1909. Impressive guy and I’m glad he’s on our team. 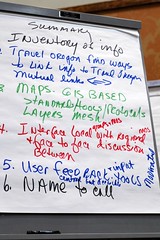 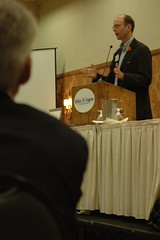 Next up was Todd Davidson, CEO of Travel Oregon. Here are some stats he shared:

It was great to see cycling on the cover of the current Travel Oregon magazine. I hope Todd and his staff continue to be excited about cycling and work to integrate bikes into the marketing of Oregon.

We also heard from Tim Woods, Director of Oregon Parks and Rec and Sheila Lyons, who’s charge of bicycle facilities for ODOT.

After lunch, Congressman Peter DeFazio gave us his perspective from “inside the Beltway”. He spoke with optimism about the fact that transportation (and especially bicycles) is one of the last remaining non-partisan issues in DC.

We then broke up into three workshop sessions to share ideas and brainstorm about website development, “Marketing the experience”, and “Growing the resource” which dealt with infrastructure and facilities. The workshops were lively and I got the feeling that everyone in the room felt like an important part of this effort to make Oregon, “The place bicycles dream about”.

For Cheryl Edwards, a bike loving entrepreneur and resident of Dufur, Oregon, this summit is what she’s been dreaming about. Cheryl has big plans for hosting cyclists on her land, just outside popular mountain biking areas in Mt. Hood and she said, “I could just about cry that they’re doing this right now.”

I’m happy about it too…not quite to tears, but it’s exciting that everyone is coming together to make this dream a reality.

[Here are the rest of my photos from the Summit]

Nice to see Cedar Kyes with a smile on his face. His was recently “un-employed” during the recent Kinesis/Mountain Cycles meltdown. Did you happen to learn what he’s doing for a living now? (Perhaps he saw the summit as a networking opportunity … brilliant!)

Cedar was there to share his vision and rally support for the PDX Bike Park. I spoke with him about it and he seems to be making real progress. I hope to post an update soon.

I just got this email from Chery Edwards (she is still in Eugene attending the Governor’s Conference on Tourism):

I am still down in Eugene and caught your info on the summit down here. I have to tell you, there are some 300 people here for the State Summit! That means that the cycling “niche”, as they call it, pulled in HALF as many people as the ENTIRE STATE SUMMIT! That should tell us all loud and clear what commitment we have from the cycling community and the great impact we can make in legislation NOW to make things happen.”

I hope that members of the summit are reading this. My single idea to create a more bike-friendly state is to connect the most bike-friendly cities together with clear routes. Two major blocks to this are the numerous freeway crossings of Hwy 99W, and the lack of access across the Willamete River. I have already spoken with Basil Christopher about the unsafe bridge conditions and there didn’t seem to be many options from ODOT (surprise). But once past those difficulties, the ride from Portland to Salem, Corvalis, Eugene is marvelous. Let’s have a bike corridor paralleling I-5!

Jonathan, good summation of a splendid summit! I’m excited that State Parks is hiring someone by this summer to begin pursuing some of the ideas & inspiration from the event, & that ODOT is revising the Statewide bike map & taking it online with increased detail & information. Lots of non-bikey folks there, too, from visitor’s associations from around the state…though none from POVA…waaaahh!?! Kudos to Jerry Norquist & Cycle Oregon for pulling it all together. Very encouraging!