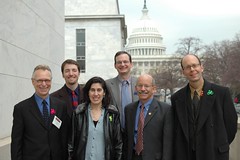 Not sure where to begin…it was such a full day and now it’s nearly 2:00 AM and I’ve got to be at it again tomorrow morning at 9:00…but it was such a memorable day that I want to share a few things…

Today was all about lobbying the OR members of Congress and the Senate. We started the day with an inspiring pep talk by the #1 cycling advocate in Washington DC, Jim Oberstar. He (like all of us) is very excited about the money and momentum for Safe Routes to School and in reference to that he said we “have the chance to change the habits of an entire generation…it’s now in your hands.” Hearing stuff like that from a member of Congress in the House Office Building gave us all great confidence heading into our meetings. 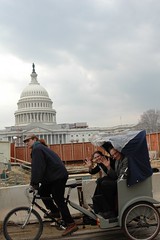 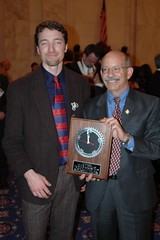 [Congressman Peter DeFazio
and me.]

You have to realize I’m woefully ignorant of how things work here in DC (I even got the Capitol Building confused with the White House) so I had no idea what to expect. But suddenly there I was, in the office of a U.S. Senator with a group of smart people talking about bike issues. It was an incredibly profound experience for me and has forever changed the way I think about government, bike advocacy, and the power of passionate people.

The delegates listened to us and took notes. They asked good questions and we gave them good answers. I didn’t even really say anything at the meetings, I just took everything in and let our stellar team work their magic. That team included Susan Otcenas, Jerry Norquist, Mia Birk, Scott Bricker, Jay Graves, Jessica Roberts, and Evan Manvel. We are all very lucky to have such smart and talented bike advocates fighting for us. Thanks team!

Their magic resulted in at least one great victory already. About an hour after visiting with a staff member of Congresswoman Darlene Hooley we were eating lunch when Jay Graves received an email on his cell phone. Here’s what it said:

“I thank you for taking the time to come to DC to meet with me and discuss issues of concern with the Oregon bicycle community. I also wanted to make you aware that I’ve been in contact with Earl’s office to let them know that Darlene would like to cosign the letter to the appropriators regarding the Bike/Conserve authorization and to cosponsor HR 807 (Bike commuter bill).”

So there you have it. We asked for their support on those two important bike issues, they listened to us and now bicycling has another official ally in Congress! It was a thrilling moment for all of us and high fives were exchanged all around.

I also met a ton of interesting and inspiring people today. Among them was one of my all-time mountain biking idols, Ned Overend. I also met Randy Neufeld, founder of the Chicagoland Bicycle Federation. He’s a brilliant guy with tons of great ideas. They’re doing some cool stuff with messengers that I’m interested in and we also talked about their exciting Healthy Streets Campaign.

One topic I talked to several people about is the importance of synergy and communication between all elements of the bike community. The differences between grassroots activism and traditional advocacy is something I’ve thought about for a long time. For example, we all know that there’s a huge difference between how Shift, Zoobomb and other grassroots groups promote bikes and how the BTA promotes bikes. Now that it has come up recently in the community, I look forward to writing more about it when I get home.

Still more to tell you but that’s enough for now.

I took a bunch of photos today…I’ll add descriptions as soon as I can but now I’m going to bed. Hope all is well in Portland.

link to the bill

sorry we did not get to connect

I wanted to meet Ned Overend
like a novice hockey player having a chance to skate with Wayne Gretzsky
I had a chance to go on a mountainbike ride with Ned Overend
but
the responsibilities of adult life did not let me pull out the bike on a “school day”
can not wait to here the saga from the friends who got to ride with Mountain Bike Legend Ned Overend
(and just for effect…. I would have loved to had a few photos of me along side of him… CLYDESDALE along side of an Elite Racer)

HR807 for the google impaired.

Sorry for the bad link.

gwadzilla, sorry too that we didn’t hook up. would have been fun to meet…I’ve been a long-time reader of your blog.