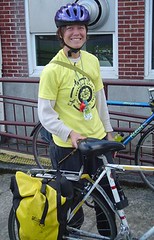 Sara Stout is a tremendous asset to cyclists around the world. In addition to travelling internationally as a member of the World Carfree Network, she is one of the founding members of Shift, a BTA bike safety educator, and co-host of the KBOO Bike Show. Right now she’s in NYC, fighting for the rights of arrested cyclists and trying to get her head around why that city treats cyclists like terrorists. I asked Sara to share some thoughts about what she’s been doing:

While NY cyclists have won a recent court victory against the city there have still been 687 cyclists arrested already this year. In response to this crazy, unfair treatment of peaceful pedalers, Sara has created an action alert and is encouraging everyone to show support of NY cyclists by sending an email or letter to NYC politicians. Here’s more on the “Free NYC Cyclists Campaign“.

As for NYC vs. Portland’s bike friendliness:

I have also been observing the big picture of bicycling in NYC and the politics that make the conditions here so difficult and progress toward safer streets so challenging. The notion of bicycling as beneficial mode of transportation is clearly not celebrated by the politicians here. In addition to condoning the arrest of cyclists at Critical Mass rides, the City Council is considering a proposal to ban the use of Pedicabs in Mid-town Manhattan. This hostile response to the peaceful use of pedal-power is quite remarkable to me! I have been observing, taking notes and trying too make some sense of it all.

And stay tuned for part of her visit to show up on the KBOO Bike Show in April:

I have also visited a Safe Routes to School Program in a middle school in the Bronx. I interviewed some kids who participate in the program, and I hope to air the voices of these insightful young people on the KBOO bike show in April.

Sara, you are truly a hero to all of us that ride bikes in cities and I wish you the best of luck in your efforts. You can see more of Sara Stout in my photo archives.

*UPDATE: Sara is quoted in a recent Village Voice article on Critical mass.

Jonathan’s article was right on the button. Sara is a true hero not only in Portland, but internationally. New York is the most hostile city in North America for cyclists. I have never before or since observed drivers purposefully aim their vehicles at pedestrians and cyclists with such regular disregard. Not only does NYC show hostility to Crit. Mass, they show no support for tolls, speed cameras, or a car-free central park (despite 100,000 signatures).
The reason is that all politicians (except Mayor ‘metro card’ Mike Bloomberg) travel from the suburbs to Manhattan. They need a Sam Adams or a Roger Geller.

new york is a hard city, but not the most hostile towards bikers. i haven’t been to much of the south/sw/midwest/great lakes (nevermind those “other” countries) but I think portland is more hostile than New York, SF, LA, or DC.*

Biking is a divisive issue in Portland. We are mighty opinionated about how we get around. In NYC motorists are pretty indifferent. Sure there are plenty of honks (but you want them honking at you cause then you know they see you) but there is also a sense of admiration. It is harder to get around by bike in newyork so motorists respect you for staying alive.

* West Baltimore is in the running for the hostile trophy