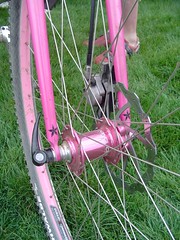 Local bike component manufacturer, King Cycle Group/Chris King Components has just released the results of their “Pretty and Strong” promotion. Over a four month period they donated a portion of the sales of a limited production run of pink parts to Oregon and SW Washington chapters of the Susan G. Komen Foundation. The final donation amounted to $10,316.56.


“The dealers who chose to sell it and the riders who chose to buy it carried that commitment to completion. I am continually amazed that we have the people inside our company and customer support outside who can make this sort of thing go.”

I worked with King Cycle Group back Santa Barbara, California right out of college and I can say that I have never come across a company so committed to being a good citizen. In addition to being one of the most earth-friendly companies in the world, they spend and donate thousands and thousands of dollars every year to non-profits, trail building projects, and more. This may not seem like a ton of money compared the millions a company like Nike can throw around, but this is a small, privately held company that makes bike parts (which isn’t exactly a rich man’s business). If “voting with your wallet” means anything to you than you should have King headsets and hubs on your bikes or at least one of their cool shirts on your back.

I don’t mean to pontificate or anything but this company is the real deal, and that’s increasingly rare in the business world these days.

Not only that, but when you buy King stuff, you have it for life. King Headsets & Hubs are the real deal. They may be more expensive than their competitors, however they are made here in Portland in an environmentally conscious way (check out their website), totally serviceable and built to LAST!

My experience with King has been excellent. I race their products on my MTB. It’s solid and I love the instant engagement of their hubs. Oh so nice…..

They had awesome support at the Cross Crusade races last year. I tore a rear derailure in a race and they installed a brand new derailure of higher quality on my bike for free. The wrenches wouldn’t even let me buy them lunch. They were that cool about it…..

Besides they’ve had shops in both of my previous hometowns of Santa Barbara and Redding.

The nice “wrenches” (esp. Kevin) under the tent at Cross Crusade races did a free super-professional, super-straight install of a CK headset into my ‘cross bike after a race. That’s sweet.