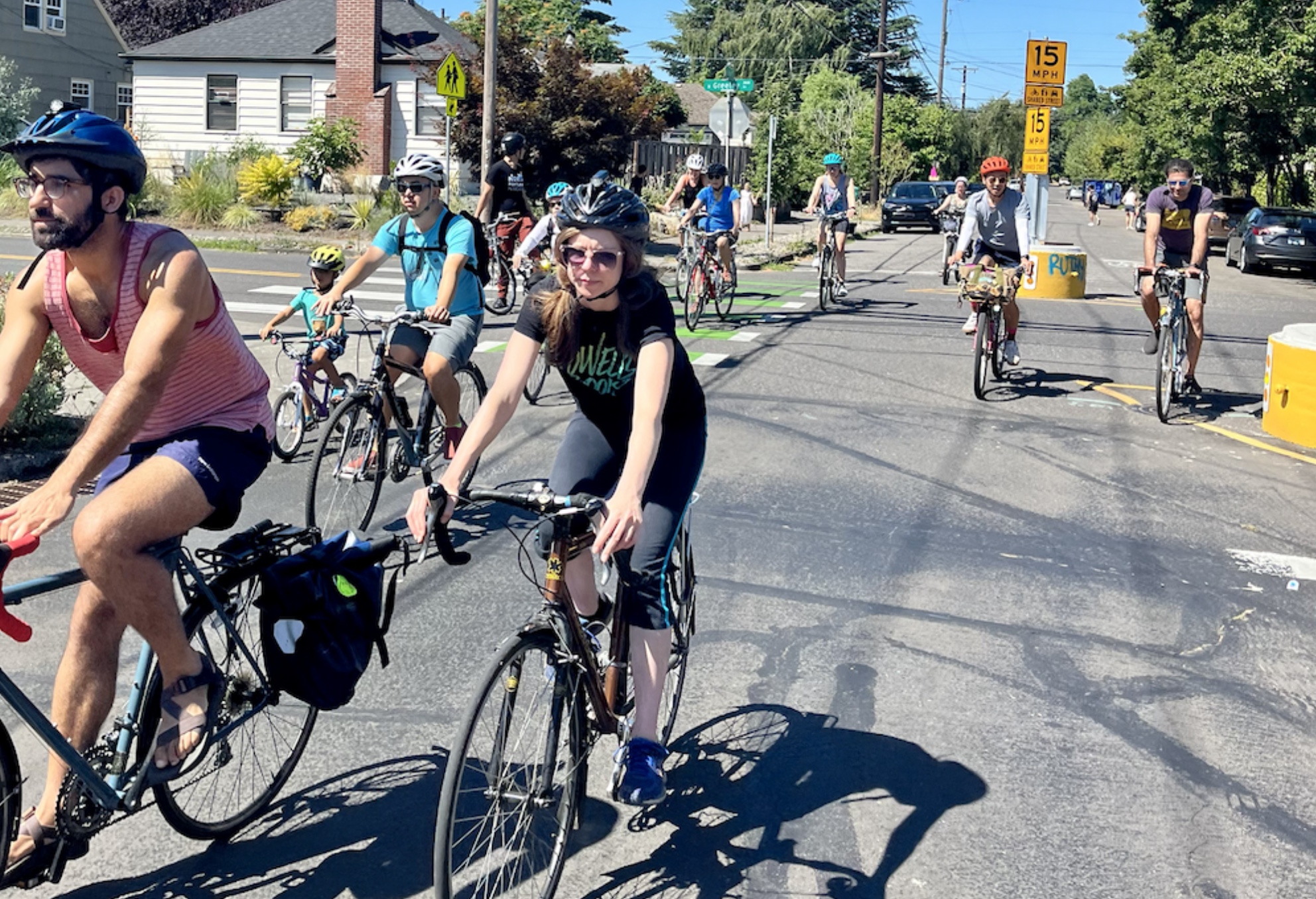 For many people who live outside of north Portland, the idea of getting up to the peninsula can seem daunting. Despite many destinations (the stunning St. John’s Bridge and Cathedral Park are particular standouts), this area may as well be a different city altogether for those who don’t want to make the trek.

Distance is one factor, but the inadequate state of active transportation infrastructure also plays a role. The Portland Bureau of Transportation hopes to change that with its North Portland in Motion (NPIM) plan to improve biking, walking and public transit facilities in this section of the city.

On Saturday, PBOT Planner (and north Portland resident) Mike Serritella led a group of about a dozen people around the Kenton, Arbor Lodge and Overlook neighborhoods. This was the first of three NPIM Pedalpalooza rides, with another one venturing further northwest this Thursday.

PBOT launched the NPIM project in 2021, making it the most recent section of the city to be selected for the ‘In Motion’ planning treatment. The approach is to analyze the existing network, get as much feedback as possible, then develop a project list for near-term implementation.

Last December, PBOT asked north Portland residents or frequent visitors to participate in an open house survey to help identify the scope of NPIM projects. The results of that open house will be available to the public this month, and PBOT will then seek more public input for the next phase of the project.

Kenton, Arbor Lodge and Overlook will be a key part of NPIM. The neighborhoods house art galleries, cute coffee shops and beautiful parks that are destinations in their own right. And they’re also a gateway to the peninsula.

We began the ride on Denver Avenue (Kenton’s main street) then headed south to Arbor Lodge and Overlook, stopping several times throughout the ride to check out notable sites. One of these places was the carfree stretch of N Delaware Ave between Arbor Lodge Park and Chief Joseph Elementary School (right), which has been turned into a little plaza with covered bike parking. Serritella said PBOT wants to make further changes to this plaza so it’s accessible to all and a nicer place for people to hang out.

“This is an example of how PBOT can help enhance both the parks and school experiences,” Serritella said.

We also took a look at some concrete planter diverters on Willamette Blvd between Jessup and Ainsworth streets. Installed in 2019, these diverters slow drivers down, reduce cut-through traffic, and beautify the neighborhood with their vivid paint and plantings.

Serritella was enthusiastic about the Willamette Blvd Active Transportation Corridor plan to add three new miles of protected bikeways to Willamette, creating a complete bike connection from MLK Jr. Blvd all the way to St. John’s. PBOT has received more than $4 million in Metro funding for this $6.1 million project. While it’s not technically under the NPIM umbrella and isn’t scheduled for completion until 2026, PBOT says they’ll for ways to get it done sooner than that.

I was pleasantly surprised by the buffered bike lanes on N Denver in Kenton, which I felt were quite pleasant to ride on compared to some painted bike lanes in other parts of the city. For folks who don’t like the unprotected feel of these lanes (which PBOT wanted to make parking-protected but changed the design due to concerns from nearby residents) PBOT plans to turn nearby N Delaware Ave into a greenway as part of NPIM, in order to provide another option for a north-south connection in the area.

Dreaming of new greenways and other bike network upgrades is why these “In Motion” plans are so exciting — they give us a relatively blank canvas to create an ideal active transportation vision. Unfortunately, the projects rarely come with funding attached.

Another barrier to getting work done through NPIM in particular is the Oregon Department of Transportation’s jurisdiction over Lombard Street, a major east-west arterial that bisects the peninsula.

ODOT has recently added unprotected bike lanes to a key stretch of Lombard (stay tuned for coverage!) and made other changes to slow down drivers, but the jurisdictional inconsistency will continue to play a role in the future of NPIM and other changes the City of Portland wants to make in this area.

If you want to learn more or play a role in that future, join Serritella on more NPIM rides this Thursday and Saturday. And stay tuned for more coverage.