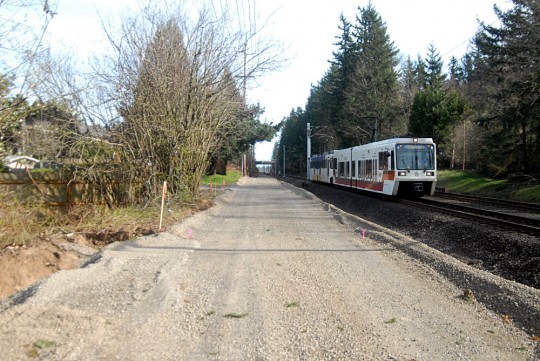 Though it’s possible to get between central Gresham and the Springwater Corridor by bike lane, there’s never been a truly comfortable link between the two, or first-rate bike connection between Gresham’s central business district and the dense Rockwood area. That’s about to change.

Gresham is building a wide new paved path alongside the MAX tracks between the Cleveland Avenue station, at the eastern end of the Blue Line, and the Ruby Junction station where many TriMet trains stop their runs to go out of service. 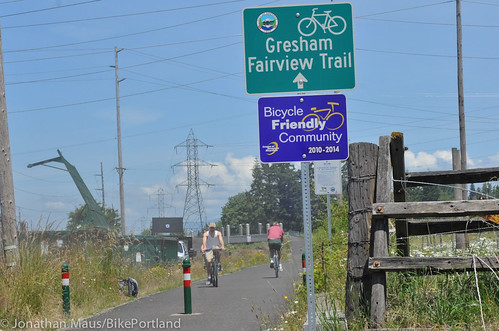 The Gresham Fairvew Trail at its southern start just north of the Springwater Corridor and a bit east of the Portland city border.
(Photos J. Maus/BikePortland) 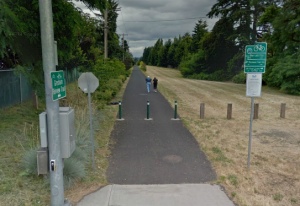 Entrance to Gresham-Fair Trail off of SE Stark.

Portland resident Shyla Osborn, 45, says she was assaulted on March 12th while biking on the Gresham-Fairview Trail. According to Osborn, the incident occurred on the path between SE Stark and Glisan near 201st Ave.

Here’s how it went down according to Osborn:

“… I was assaulted by two teenage girls on the Gresham-Fairview trail in the Rockwood neighborhood, on the segment between Stark and Glisan. As I rode northward, they were strolling casually towards me, one on the left and one on the right edge of the trail (unremarkable on such a lovely sunny day); as I came closer and was about to pedal between them, I noticed that one of them was carrying a large tree branch. At this point, it was too late to turn back and get away: the girl on my left lunged in to corral me while her companion on my right swung the branch at my head like she was going for the bleachers. The blow cracked my boyfriend’s $70 helmet; another blow came down on my right shoulder. As soon as they hit their target, they ran off giggling and escaped over the chain-link fence of the one of the houses whose backyard faces the trail. They left me with a pretty nasty bump on my head and a bruised shoulder.” 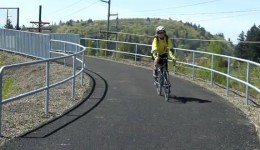 U.S. Congressman Earl Blumenauer will be on hand this Thursday when the City of Gresham officially opens the newest section of the Gresham-Fairview Trail.

Blumenauer will join a Gresham City Councilor and a Metro Councilor at SE Powell and SW 10th, where a newly finished, 177-foot bridge takes bicycling and walking traffic up and over Powell. The bridge is the first of its kind in Gresham and it creates a crucial connection for the Gresham Fairview Trail. 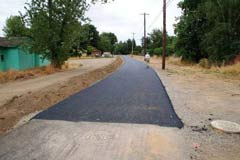 The City of Gresham has announced a public celebration and grand opening for the completion of Phase 1 of the Gresham-Fairview Trail.

The event — which coincides with National Trails Day — will kick off at 10 am this Saturday (6/2) and will include a formal dedication and festivites along the trail at NE Holladay St. and NE 201st Avenue.

[Bridge would go over this
area of Powell Blvd.]
Photo: ODOT

Money to build a bridge over Powell Blvd. has been awarded to the city of Gresham through the federal Transportation Enhancements funding process.

The bridge is a crucial piece of the $9.4 million Gresham-Fairview Trail.