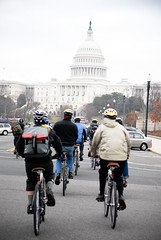 House Congressional Resolution 305, also known as the National Bike Bill, has passed through a vote by the U.S. House of Representatives earlier this week.

The resolution — which was introduced by Congressman Earl Blumenauer (D-OR) back in February — recognizes the importance of bicycling to “enriching the nation’s health, reducing traffic congestion and greenhouse gas emissions, and improving America’s economic vitality and overall quality of life.” 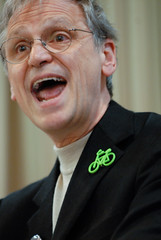 An animated Earl Blumenauer
speaking at the Oregon Bike
Summit a few months ago.
(All photos © J. Maus)

As the nation’s political winds shift from right to left, the future of the transportation issue in America begins to look very different.

Remember last summer, when U.S. Transportation Secretary Mary Peters referred to “bike paths” as not being transportation infrastructure? After a stern rebuke by bike advocates, she eventually tried to apologize, but her comments were a window into how some folks on Capitol Hill still regard non-motorized transportation.

And then there was House Rep. Patrick McHenry (R-NC), who, in a debate over the Energy Bill last August referred to bicycles as “a 19th century solution to a 21st century problem.” (Watch a YouTube clip of his speech here).

Now it’s onto the Senate. More on this story was published yesterday. Official press release from Blumenauer’s office is below: 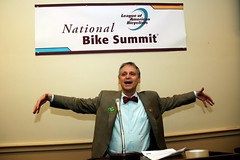 On the heels of record profits by the big five oil companies, U.S. Congressman Earl Blumenauer (D-Portland) will once again try to enact a tax benefit for bike commuters and close the “Hummer tax loophole.”

The bike commuter tax benefit (a.k.a. the Bike Commuter Act and the Conserve By Bike provision) would amend the IRS code to include “bicycles” in the definition of transportation covered by fringe benefits. The Hummer tax loophole would fix what Blumenauer refers to as “a serious mistake” in the tax code that provides an additional tax break for business purchases of luxury SUVs weighing over 6,000 lbs. 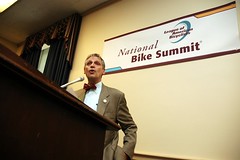 The bike commuter tax benefit — which was introduced to Congress by Earl Blumenauer last March and passed a House vote last week — has been stripped out of the Energy Bill by the Senate.

The U.S. Senate passed the Energy Bill yesterday, but not before removing several “green initiatives” included in the bill by the Blumenauer-led Ways and Means Committee. 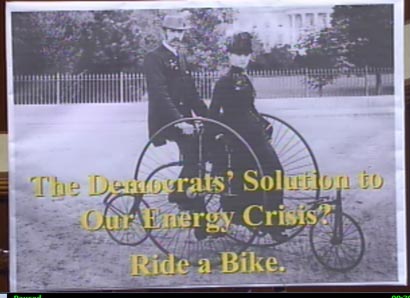 Poster that accompanied a statement on the House floor by Rep. Patrick McHenry (R-NC) who said bicycles were a, “19th century solution to a 21st century problem.”

(Note: The title of this post was originally, “Benefits fraud may stymie progress on Bike Commuter Act.” I changed it to better reflect the situation.).

I just got an email from Congressman Earl Blumenauer’s legislative assistant Katie Drennan. She said that although there is considerable momentum for the Bike Commuter Act (42 co-sponsors so far), there’s a situation brewing on the Hill that might cause a bump in the road.

Congressman Earl Blumenauer introducing his Bike Commuter Act at the House Office Building. Members of the Oregon contingent in the background. 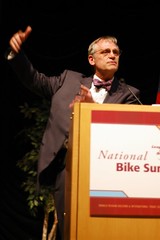 Blumenauer at the
Summit opening.

Blumenauer just finished a speech at the opening of the National Bike Summit and he hinted at this news when he confidently said,

“With the congressional shift in Washington, It’s nice to be in a position where I can introduce legislation. The Bicycle Commuter Benefits Act will get a hearing and I think we can get it through this time.”

The Act has been around for years, but went nowhere in the old Congress.

If you think bicycle commuters deserve the same tax benefits from employers that already exist for drivers and transit users now is the time to make your voice heard. I just got this urgent call to action from Jessica Roberts at the BTA.