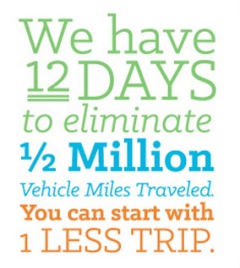 The Oregon Department of Transportation has stepped up to join a promotional campaign aimed at encouraging Oregonians to drive less. For the first time since the state-funded Drive Less Save More marketing program started in 2006, the effort will be statewide this year. Past campaigns have only focused on the Portland region, but in a statement today, ODOT said they’re spearheading the week-long Drive Less Challenge, “as part of the state’s ongoing efforts to reduce greenhouse gas emissions and encourage alternative transportation to reduce congestion.”

The Drive Less Challenge starts October 21st and runs through November 1st. In those 12 days, ODOT has set a goal of eliminating 500,000 vehicle miles traveled.

The Carefree Commuter Challenge starts next month and the folks at Drive Less Save More are expecting over 2,000 people from across the region to take part.

The Challenge is just one component of a state-funded marketing program aimed at encouraging folks to get around with something other than their car. Drive Less Save More was launched by the Oregon Department of Transportation in 2006 and since then they’ve partnered up with organizations throughout the state to promote biking, walking, carpooling and transit.

A screenshot from video “Dear Nana” by Guy Baker

“Drive Less. Save More.” is an awareness campaign sponsored by dozens of regional businesses and organizations whose collective goal is to reduce car trips in Oregon and Southwest Washington. The program provides the public with information about driving costs, transportation options, delivery services, and more.

The campaign’s latest promotion, the Drive Less. Save More. Video Challenge, solicited video entries for use as the campaign’s next television advertisement. Seventy-seven entries were submitted in two categories and the field has been narrowed by campaign judges to the five best in both General and Youth (under 17) categories.

Now it’s up to the public to decide the winners. Check out the ten contenders and vote on the ones you think do the best job of getting across the Drive Less message.