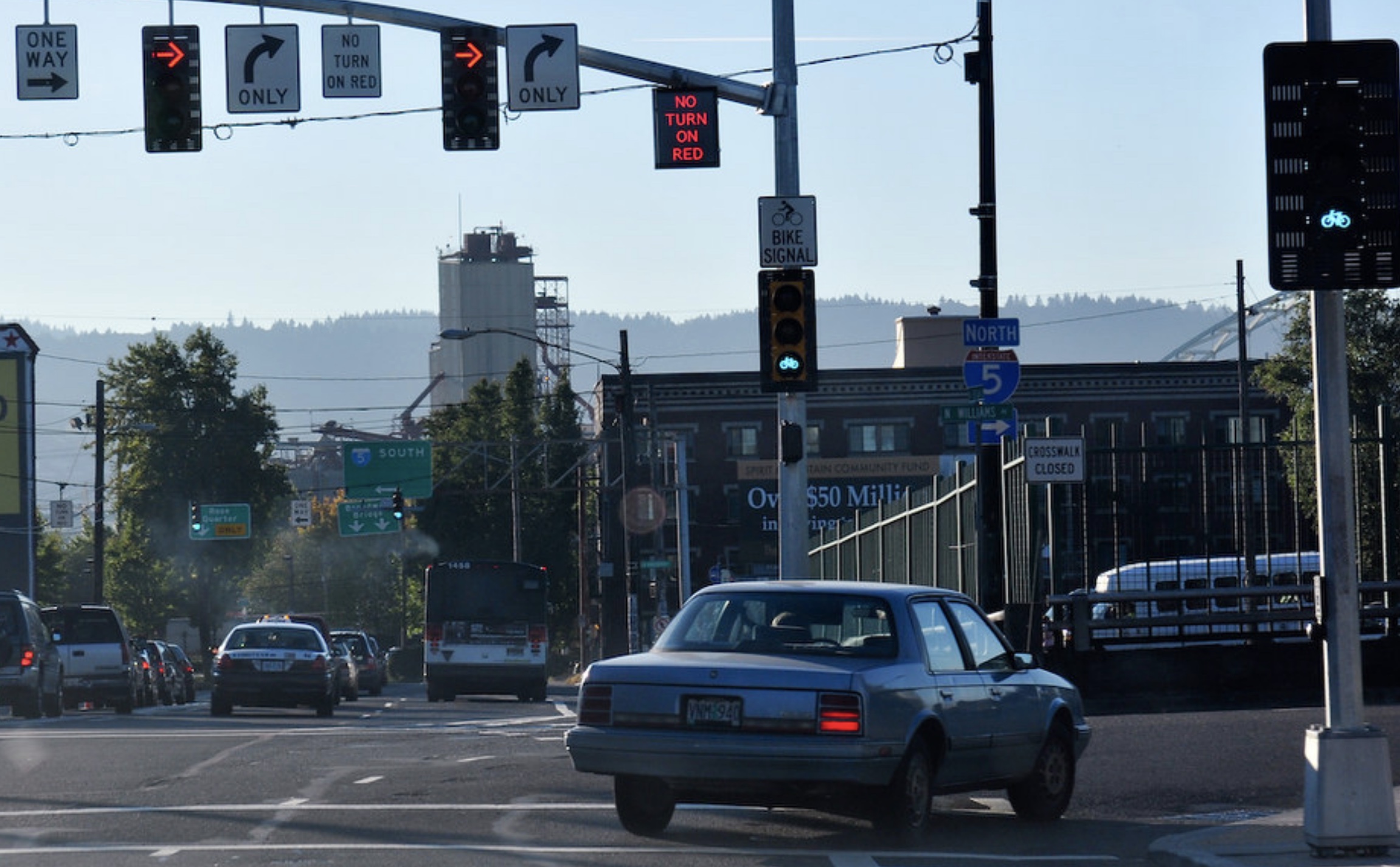 “Right on red implies auto users should be moving even more rapidly through our streets.”

One reason I love the BikePortland comment section is because it is so educational. Case in point: I learned a new acronym last week: RTOR, or ROR.

It stands for Right Turn on Red (or Right on Red), which was the subject of one of last week’s Monday Roundup articles. The article was about the Washington D.C. Council considering a ban on right turns on a red signal as part of a transportation package aimed at making city streets safer.

Oregon also allows right-on-red, and BikePortland readers and commenters have an opinion about that.

It is not hard to describe the symptoms of the problem— drivers rolling through red lights, heads turned left looking for on-coming car traffic, and crashing into people to their right who are in the bike lane or crosswalk. But Mathew caught the essence of the problem — which is really car-centrism.

Here’s what he wrote:

Right-on-red was and is a terrible idea in relation to transportation safety in a city setting. It encourages unsafe driving habits and favors the supremacy of auto users on our shared roadways.

Right-on-red not only prioritizes auto users — already essentially the fastest and most efficient mode of transportation in a metropolitan, urban setting — but implies that they should be moving even more rapidly through our streets. Right-on-red validates impatience.

It also endorses the idea that the only other road users automobile drivers should really be looking out for are other auto users. Anyone walking, riding, or rolling will have experienced incidents at intersections where an auto user, emboldened by right-on-red, executes a rapid rolling stop, or worse blows right through a red light or stop sign. It’s tedious in its frequency.

I would hope that the Bicycle Advisory Committee would demand that the city implement a right-on-red ban such as D.C’s.

Thank you Matthew! You can read Matthew’s comment and the other informative comments in the thread under the original post (don’t forget to look for the ROR!).

Right on! The same can be said for Idaho Stop laws.

Let’s see some data about how many non-cyclists are injured by cyclists rolling a stop sign.

Why not just make the roads safe for all? I’ve had cyclists nearly run me over when they weren’t paying attention to what was going on around them (too busy talking to their riding buddy) when they blew through stop signs.
Bikes are great, but they aren’t the holy grail of transportation despite what many think. There are other vulnerable street users out there that need to have safety in place not just laws that allow for those inpatient motorists and cyclists.

The law in place in Oregon requires cyclists to yield to vehicles/peds that have the right of way.

RTOR is in no way equivalent to the Idaho stop. Vulnerable cyclists have *every* incentive to look out for other road users at every intersection, since we’re going to come off badly in a collision.

Not so for drivers of cars and trucks, who are essentially invulnerable in their heavy steel cages, and who often have a really hard time seeing out of their steel cages, esp if they are distracted by their phones etc.

Cyclists are much more aware of their surroundings, by necessity, than car drivers are, so it’s really unfair to compare the two.

Middle of the Road Guy
Reply to  Fred

“Cyclists are much more aware of their surroundings, by necessity, than car drivers are, so it’s really unfair to compare the two.”

Oh, I have seen so many examples of that not being true. Were it not for me being alert as a driver, they’d be in much worse shape.

Middle of the Road Guy
Reply to  Matt Meskill

The statement was about impatience.

Ray
Reply to  Middle of the Road Guy

In rebuttal, the “Idaho Stop” is less about impatience and more about efficiency.
Bicycles, Rolling Stops, and the Idaho Stop on Vimeo

Wikipedia has a good article on Turn On Red, including left turns on red:
https://en.wikipedia.org/wiki/Turn_on_red

Little paragraph at the end:

A 1981 US Department of Transportation study determined that the frequency of motor vehicle collisions with bicyclists and pedestrians when the vehicle was turning right increased significantly after the adoption of “Western RTOR”. According to that study “Estimates of the magnitude of the increases ranged from 43% to 107% for pedestrian accidents and 72% to 123% for bicyclist accidents.”[60] A 1984 study found that where RTOR was allowed “all right-turning crashes increase by about 23%, pedestrian crashes by about 60%, and bicyclist crashes by about 100%.”[61] A 1993 study also concluded that RTOR increased crashes for pedestrians and cyclists, by 44% and 59% respectively.[62]

NYC has had NROR for decades. Countless injuries and deaths saved.

I drove a rental car in Germany a few years ago. I asked my German passenger if I could turn right at a red light, and he just laughed. It’s so unsafe as to be unthinkable there – and that in a country that has no speed limit on sections of the Autobahn.

I had to admit that I often felt impatient waiting to turn right at lights, but after a while I got used to it and factored the waiting time into my travel time.

Matthew is correct that we have conditioned drivers to be impatient, with predictable results.

And of course, everyone remembers the line from Woody Allen’s film Manahattan, right? About Los Angeles, “…where the only cultural advantage is you can make a right turn on a red light…”

I don’t know if it has ever been legal to turn right on red in Manhattan. You’d never get across the street as a pedestrian.

Apparently Richmond County (Staten Island) allows it at many but not all intersections, the other four counties (New York, Bronx, Kings, & Queens) it’s very rare. I’ve come across other cities in the US that have also effectively banned right turns on red.

Exactly! I’m originally from Germany, and in my opinion the ROR is one of the biggest safety issues for bicyclists that I observe here in the US. In Germany (and others like Denmark), car drivers have to wait for the green light before turning right, then they look over their right shoulder to check for bicyclists coming from behind, then to the right to check for pedestrians crossing the intersection, then they turn right. Here, car drivers pull up half way into the intersection (often into the bikelane) before even coming to a stop, look to the left for car traffic, then turn quickly right without looking for people biking or walking. Of course, these are generalizations, but ROR makes people driving cars impatient, or maybe if you are more careful, the people behind you impatient. And it gives a sense of entitlement of being able to quickly turn right without regard to other road users.
The looking over your right shoulder part was so ingrained in me in German drivers ed that I even look over my right shoulder when I bike!

It seems to me that most drivers approach a stop sign (and many lights) with the assumption that there won’t be anyone/thing else to yield to and they won’t have to come to a complete stop, therefore rolling the stop…whether they are turning or not. And almost no one pays attention to stop lines or marked crosswalks when approaching an intersection.

Agree. I see way too much of this habit I’m Portland, and SO MANY drivers pulling *into* green boxes to make a right where the are no right on red signs. Just yesterday I saw it twice. Honestly when I went to Chicago last fall, the frequency with which drivers stopped at the stop line, and were making eye contact with me as a pedestrian shocked me. I have been so thoroughly disillusioned by Portland drives.

Coincident to reading this, I had a RTOR interacton this morning. Riding south on Interstate, approaching the signal at Tillamook- I have a stale green. A huge dumptruck (with a trailer with a n extra long tongue) approached the signal (red for them) eastbound. Tehy pause, then start to roll throuugh, pause again, presumably because they see me, then proceed anyway. I only have to slow down for them, no brake slamming, but then I overtake them on their right and they are forced to stop in the lane to wait to cross over the bike lane to access the Larrabee Viaduct! The driver proceeded to express *something* by laying on his enormous horn for a full 5-6 seconds!

Seems like they may have thought that you were supposed to yield to them because they’re bigger…when in my opinion, the larger you are the more likely that you should yield right-of-way to someone/thing lower on the traffic hierarchy.

I gotta take exception to the automobile being “the fastest and most efficient mode of transportation in a metropolitan, urban setting.” To the extent that that’s true, it’s only because we have inadequate multimodal systems of transportation in many of our cities, Portland included. But pound for pound, personal cars are by far the least efficient mode in terms of the number of people moved through a space in a given amount of time.

When I am in the lead position in the right lane with a ROR, most drivers behind me insist that i GO, like now.

That’s why I dislike ROR as a driver, especially in pedestrian-heavy areas. Drivers behind you don’t see the reasons you’re not going, and/or don’t like that you’re doing things like not pulling forward across the crosswalk in front of you, waiting for pedestrians, not turning right before the light changes so that you don’t hit people stepping off the curb, etc.–in other words, all the things you SHOULD be doing as a driver.

Keep in mind that there are tradeoffs to everything. RTOR does increase the efficiency of automobile movements and reduces (slightly) emissions. Yes, there is a safety tradeoff.

If we eliminate RTOR, prepare for more cut-through traffic on your local residential streets. Just saying….