The people who work in the Portland Bureau of Transportation’s Maintenance Operations department do the nitty-gritty work of keeping this city moving — and their work is especially valued by those who rely on clean bike lanes and bright crosswalk stripes for their safety.

Their work is inherently laborious, but maintenance staff used to feel like it was worth it. The city benefits were good, yes – but employees also found a sense of satisfaction and pride in their work. But now, as staff shortages force employees to work excessive hours of overtime without reaping the same benefits or competitive hourly wages public employees used to receive, they’re calling on the city to repair their relationship or face a serious crisis.

As PBOT leaders often remind us, the agency has been dealing with a multi-billion dollar maintenance backlog for decades, which they hoped to finally get a handle on with a 10-cent local gas tax in 2016. Portlanders voted in favor of the gas tax again in 2020, but the extra funding hasn’t been the maintenance game-changer it was meant to be. And the lack of upkeep is showing.

As we’ve pointed out, this situation is frustrating for people who bike and walk in this city. Nobody likes riding on greenways full of bumps and potholes or bike lanes littered with glass, trash or leaves. (A recent Bike Loud PDX policy ride with PBOT Maintenance Operations manager Jody Yates provided an insightful look into the importance of street and bikeway maintenance.)

Maintenance staffers are aware of community gripes, but claim they don’t have the resources to fix them.

Andrew Sterling is a PBOT traffic crew leader and the Vice President of Laborers Local 483, the union that represents PBOT maintenance staff. Yesterday, he took employee concerns to the public stage when he addressed City Council to ask for their help to negotiate improved working conditions.

While Sterling’s main job description concerns doing things like striping bike lanes and maintaining crosswalks, staff shortages and recent emergency weather events (like the April snow storm) have interfered with day-to-day operations. In order to get it all done, crew members have to put in a lot of overtime.

“We worked entirely through Covid, in person, on-site every day,” Sterling said. “Many of my coworkers and myself work 70 to 80 hours a week during weather emergencies. Then we have to pick up where we left off for maintenance operations.”

Sterling said these conditions have made it difficult for the maintenance division to retain and recruit employees. He said people working in this department in the city are making less money than they would if they worked in the private sector, and they aren’t seeing the kinds of benefits city employment used to bring.

“Our retirement has been defunded. Our benefits have been in decline in the last 15 years,” Sterling said. “What I’m asking of you today is to support us and our day-to-day operations. We get a lot of thank yous from downtown, but those thank yous dry up when we ask for more money, and we’re suffering.”

In response, PBOT commissioner Jo Ann Hardesty issued words of thanks, but didn’t make any promises about changing the situation for these employees.

“Folks who work for maintenance have been in the lead on many of the crises this community has experienced over the last few years,” Hardesty said. “I just want you to know that your commissioner in charge absolutely appreciates the work that you do every single day with the limited resources we have. I also know it’s not your fault we have a $4 million [sic – it’s actually “billion”] maintenance backlog.”

James O’Laughlen, Field Representative & Organizer for Local 483, told BikePortland that the city’s transportation system is suffering as a result of these problems. If something doesn’t change soon, this backlog will only get worse.

“Having so much emergency work without the necessary workers crowds out the infrastructure improvements we’re all focused on, from achieving Vision Zero to meaningful ADA compliance on our sidewalks,” O’Laughlen said on a phone call this morning. “This work only happens because people go above and beyond. They show up for voluntary overtime because they know if they don’t, the backlog is going to grow and grow.”

Employees are keeping their options on the table

Union members have been involved in contract discussions with the city since March, and although their old contract expired at the end of June, they haven’t yet come to an agreement on the terms of the new one.

O’Laughlen told BikePortland the two main things they’re looking for in the new contract are wages and safety. They want to bring back the working standard public employees used to be able to count on that made arduous public sector jobs competitive.

“What we need for our members is to create an environment where people aren’t aggressively overworked, where they are protected from conditions that have been deteriorating and getting compensation for it,” O’Laughlen said on a phone call today. “It’s hard to recruit and it’s hard to retain in a low-morale environment. It’s hard to perform the work.”

If Local 483 and the city can’t come to an agreement soon, the next step will be to bring in a mediator. If they don’t work out a deal after that, there’s potential for a strike after a cooling-off period.

“There’s a reticence to do it, but our members have communicated strongly that they’re willing to go that far. It’s based on wanting to perform this public service work.” O’Laughlen said. “They know that that the city is responsive to crisis, and our folks are willing to make themselves a crisis.”

Update: While we didn’t hear back from the Portland Bureau of Transportation by press time for this story, we later received this comment from Public Information Officer Dylan Rivera:

“We cannot comment on on-going contract negotiations. PBOT leadership supports the work of our Maintenance Operations Group, who are essential responders for the entire city when it comes to emergency response to winter weather, the COVID-19 pandemic and other emergencies. Year-round, their work is critical to providing the safe access for biking, walking and other modes of travel for our community and we will continue to work with our labor partners to make sure the City of Portland can attract and retain top talent across all areas of the bureau.”

I am not a fan of public employee unions, but when there are 2,572 Portland city employees making more than $100k, 200 who work in the transportation department and these guys make well under that to grind it out outside, it is hard to argue with their desire for more money.

Why are you not a fan of public employee unions?

I don’t like public employee unions because there generally is no competition to drive improved service/cost, so the taxpayer is held hostage to just cough up more money with no improvement to service.

I don’t think that’s how that works.

That’s exactly how it works. Use the example in the article, what is the competitive source for the work of spraying cross walks or traffic lanes on our roads? There isn’t one, so the public employee has monopolistic power over the taxpayer to hold them hostage for better pay, benefits, working conditions, etc. That’s the interesting part of their argument, supposedly they could just go to the private sector and get more pay, however, often there is not private sector equivalent. How about teaching, same thing, there is no competitive option that doesn’t require you to also pay for the public option. Sure, you can send your kid to private school, but not without also paying for public school for them. It by no means these jobs should be privatized, I just don’t think they should be beneficiary to collective bargaining via a union.

There are lots of private contractors that do the exact same kind of maintenance work, so that’s not true that they can’t leave for the private sector. What you refer to as a monopoly is only for low-cost maintenance work. Any paving or sidewalk job above a certain dollar amount is automatically contracted out through a competitive bid process.

You’d be amazed at how many of those $100K jobs (throughout the City bureaus) require no college education.

Did a quick dig, and you’re right. There are a number of jobs that I quickly identified that require no undergraduate education, but have pay close to, or over, $100k per year.

This is pretty much the case for all staff-level city workers; the only employees the city really seems to value and compensate properly are management-level.

This is what happens when a city commissioner doesn’t want to manage their assigned bureau.

Hardesty is only interested in social justice causes and the neglect of everything else, from PFD to PBOT, is staggeringly obvious to anyone who’s willing to see it.

It is time for PBOT to charge market rates for parking, construction closures, peak hour street use — and apply new revenues to pay for better maintenance.

It’s a bit simplistic, but we need to rethink street maintenance as mainly for fast moving, heavy vehicles. It is much costlier to repair the damage done by cars than to keep streets in good condition for people and micro-mobility. It’s time to re-evaluate what we want out of Portland streets. Do they all need to be car streets? 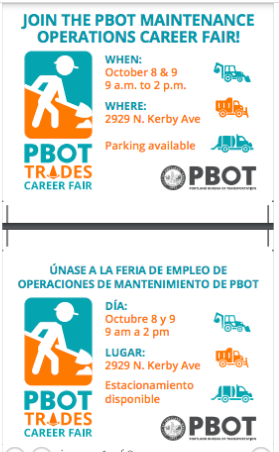 It’s amusing that the attached PBOT Maintenance Operation Career Fair poster emphasises that there is:

Perhaps many of the working class people who might apply for these jobs cannot afford to live in transportation-option-rich close-in neighborhoods.

Micromobility lanes for the few and expensive dehumanizing commutes for the many.

Contract discussions started in March when the contract was to expire the end of June? And there were issues of wages and working conditions to negotiate? Curious.

No wonder public services are underfunded with the vast majority of land in the city being low-density residential; the existing tax base is just spread too thin. I doubt if even the vaunted Residential Infill Project will solve this. Mixed-use zoning and up to 12 storeys by right on all buildable land should be a no-brainer in a growing metro like ours.

Or maybe it’s all those multi-million dollar tax breaks the City gives away to the construction industry that has some effect.

I think you mean landowners. Construction companies don’t pay property tax on the projects they build. In any case, you’re partly right: in Portland it’s too costly to build and too cheap to own vacant land. We need a land value tax.

It’s worth mentioning that no property taxes go to transportation. PBOT is pretty much entirely funded by gas tax and parking revenue. The only thing generated for transportation by development are one-time transportation system development charges, and those by law can’t be spent on maintenance, only on capacity improvements.