When I saw there was a Pedalpalooza ride from Portland to Multnomah Falls, I was immediately thrilled, and then shocked at myself.

Up until very recently, I wouldn’t have thought this was even something a person could do. I’ve had pretty low faith in my athletic abilities for my entire life – physical activity was just something I kind of brushed aside. I’d bike and walk for practical transportation reasons, but why waste calories by doing more?

However, when I began seriously biking in the last few years – and especially since I moved to Portland last year and subsequently got rid of my car – I underwent a very unexpected metamorphosis. As I racked up miles on my bike, it got easier and more fun to move my muscles, and suddenly I felt strong for the first time in my life. So I signed up for the ride, and yesterday I headed out into the Columbia River Gorge with a group of about 15 other riders. What’s more, I had faith that I’d be able to get it done and even enjoy the process.

I met up with Willy, my friend who had also signed up for the ride, and we headed for the meet-up spot in Gresham via the Springwater Corridor. After we connected with the Pedalpalooza group – headed by the intrepid Shawn Granton of the Urban Adventure League – at the eastern end of the blue line in Gresham, we headed for the Historic Columbia River Highway. 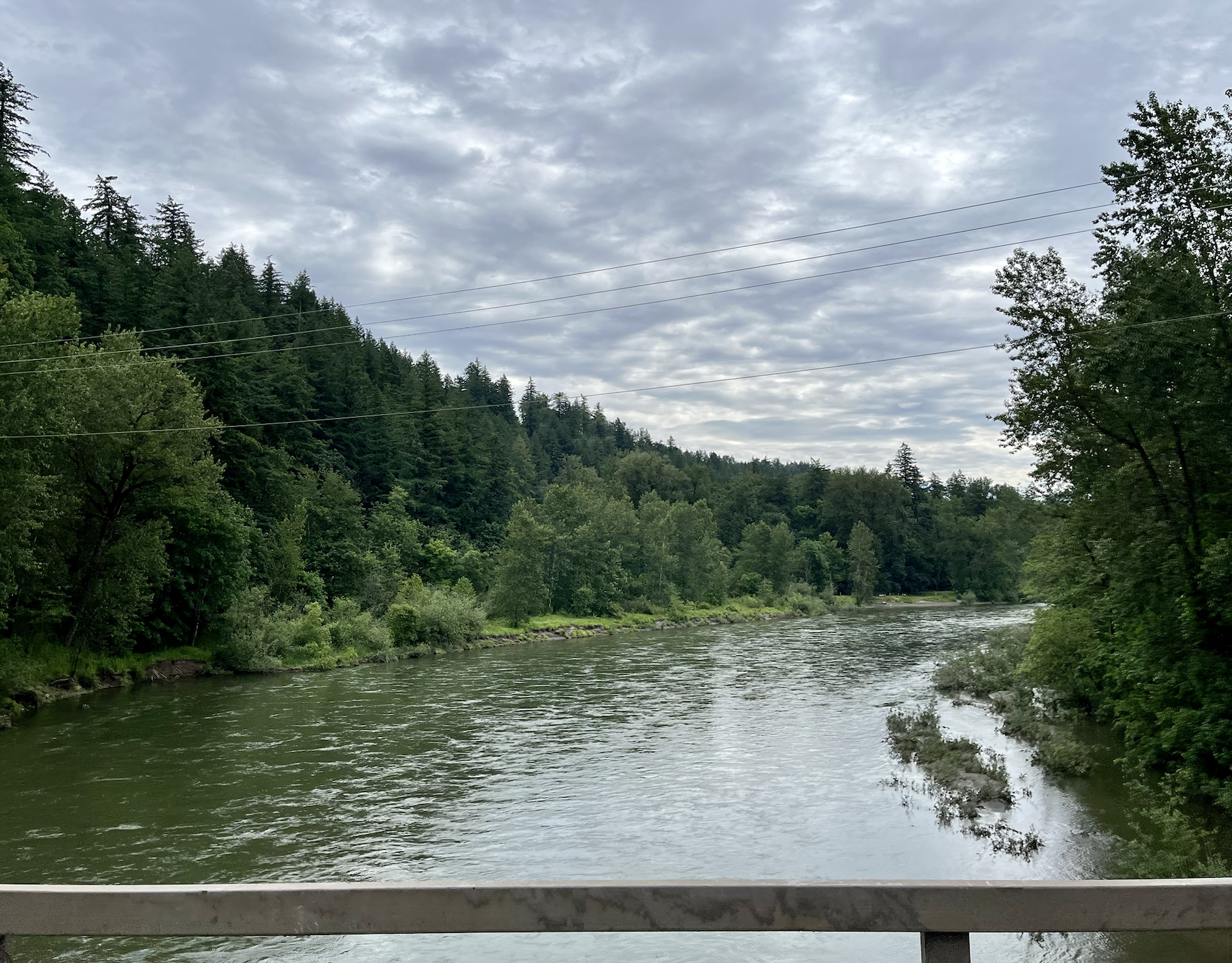 Millions of years of geologic marvels, and here we were: a group of people who like to ride bikes and are lucky enough to live in one of the most beautiful places in the world.

This scenic highway links up with Stark Street at the Stark St Bridge across the Sandy River (map), which is where I had my first big jaw-drop moment. In fact, I was so enthralled by the view I missed the rest of the group turning off into the Dabney State Recreation Area for a rest stop, and came to believe they all just managed to get so far ahead of me I’d have no chance of ever seeing them again.

But no worries – we met up shortly after and continued on our way. There was no rush. The weather was perfect, the vegetation remarkably green and the endorphins were kicking in. And we were just there to bike.

After a stop at the Corbett Country Market, where I refueled on caffeine (others sampled the pizza, ribs and beer offerings) we made for the Portland Women’s Forum viewpoint (named for the group of women who bought this property in 1956 and gifted it to the state parks and recreation department for public use).

I felt a little sore from the incline upon our arrival to the lookout spot, and I might’ve opened my mouth to complain if I hadn’t looked up and seen the view, which was so spectacular it was almost hard to look at. The Columbia River twists and turns as far as the eye can see, surrounded by an expanse of tree-covered cliffs, and seeing it from this spot was worth every cycling muscle ache I’ve ever felt in the past and will feel in the future.

The Columbia River Gorge began to form during the Miocene period more than 12 million years ago, when the Cascades emerged from a series of volcanic eruptions. The true geological phenomenon occurred at the end of the Ice Age a mere 12,000 years ago, when the Columbia River flooded and forced its way through the canyon toward the Pacific Ocean, carving out steep canyon walls as it roared through the earth. Looking out at this view, I felt like a part of nature.

Millions of years of geologic marvels, and here we were: a group of people who like to ride bikes and are lucky enough to live in one of the most beautiful places in the world. Thank goodness that combination works so well.

The Gorge stretches from the confluence of the Columbia and Deschutes rivers to just east of Gresham, and Multnomah Falls is situated pretty close to its western end. The waterfall is one of the most popular tourist destinations in the Pacific Northwest for good reason, but people flocking to its beauty in cars have caused problems. This year, the Oregon Department of Transportation has tried to alleviate car traffic congestion and encourage people to use other means of transportation to get to the Gorge by implementing a permit system.

I have nothing to compare it to since this was my first time biking this route, but it appeared to me this permit system is working pretty well. The majority of the ride on the scenic highway was pleasant and very low-car, and while it got busier as we neared the falls, it still felt safe to bike, especially with a group. We could take in the scenery and the sensory experience of flying downhill through lush forests without much fear.

One thing about biking up and down hills for dozens of miles: it will make you hungry. When we got to Multnomah Falls, I bought another coffee and an apple turnover. Then I saw one of my fellow cyclists eating a chocolate-vanilla swirl ice cream cone, and I kicked myself for rushing to eat the apple turnover before examining all my treat options. But I didn’t dwell on it for too long: I bought an ice cream cone, and a big pretzel to top it off. And why not? I needed the sugar to conquer the ride home.

Most of the people in the Pedalpalooza group were going to camp overnight a little deeper into the Gorge, but Willy and I said goodbye and headed back west while I still had my sugar and coffee buzz. Going home was a little harder (you can’t go downhill both ways) but I put my bike into its lowest gear and fixed my gaze upwards, and we made it through.

All said and done, the trip was almost 70 miles – about 45 miles more than the longest ride I’d done prior to this. I’m proud of myself for this accomplishment, but I want to make it clear that it’s totally feasible and fun to get out into the Gorge from Portland, no car required. At risk of sounding highly corny: you can probably do more than you think. If I can do it, you can too.

Congrats Taylor. Next: a century.

Awesome! The ride from the falls back up to the Women’s Forum is one of my favorite climbs. So glad you enjoyed the ride and congrats on the mileage PR!

I rode from Portland to Viento Campground and then back to Cascade Locks this morning. Aside from some rockfall on the trail near Eagle Creek, it was pretty uneventful, and I only had a few cars pass me between Women’s Forum and Ainsworth. The new trail between Wyeth and Starvation Creek is fantastic.

After a quick beer at Thunder Island, I hopped on the Columbia Gorge Express and was back to Gateway TC by 2pm. This service is great, and I hope it stays popular this summer so they can add additional runs. Mid-day on a Thursday, the bus only had a few people in Cascade Locks, but we picked up about 10 more at Multnomah Falls.

adventurepdx
Reply to  Chris I

After leading this ride and camping at Ainsworth, my partner Emee and myself rode east to Cascade Locks to catch the bus there. We did see that big boulder on the path (closer to Tanner Creek/Bonneville Dam if I recall). While it was relatively easy to get around, I wouldn’t want to hit that thing in the dark! Now if they could do something about those stairs…

I can identify — I want to do this ride but I doubt myself and my capabilities. But, I also have reached a new level (for me) in my riding this past year. So… May this be the inspiration to go for it! Thank you.

Taylor, glad you got to enjoy the Gorge! Next challenge is Larch Mountain lookout from the Edgefield.

(PS, don’t tell anyone else about the Gorge – we’ll just keep it secret so it doesn’t get too crowded!)

Awesome read, thanks for sharing!

My Gorge experience is from years of travelling between PDX and Boise. The first time coming to Portland 12 years ago I remember being awestruck by how beautiful it was, shocked it wasn’t some National Park or something.. Its quite the finale after hours of driving through high desert, endless plains, and only a handful of small towns.
Either way: I hope to get out there soon!

Good job on the ride – and on the article, Taylor.

One tiny correction: The caption on the first photo is incorrect. That’s the view from Vista House (Crown Point), not from the women’s forum site. Thanks.

That’s my mistake Fred. I’ll fix it. Thanks.

Taylor, glad you had fun! And thank you for the write-up!

I love this post, thank you! I appreciate the exuberance: marveling at nature, soaking in the views, savoring every snack along the way, surprising yourself and the overall satisfaction of a great ride. I feel very inspired!

Bravo Taylor! For the story of the Gorge I highly recommend Chuck Williams “Brigde of the Gods, Mountains of Fire: A return to the Columbia Gorge.” He advocated fiercely for a National Park in the 80’s and was bitterly disappointed in the compromise that gave us the National Scenic Area. Note that even the landscape of eastside Portland was shaped by the Missoula Floods…as many as 50 are estimated to have occurred! Alameda Ridge is a vast gravel bar formed down stream of Rocky Butte, the eastside of which was scoured out. Also it wasn’t a little creek that carved out Sullivan’s Gulch; same for the Going Street gully.

In my riding days, we’d cross the I-205 bridge into Washington, ride upstream on Highway 14 to Cascade Locks, cross back over to Oregon, and ride west, parallel to I-84 along the Columbia River Highway (didn’t need any permits then) back to our starting point…a solid 100 mile warmup! A great ride!

In Search of Ancient Oregon (by Ellen Morris Bishop) is a fantastic book for learning about the geologic origins of our state.

Awesome story, thanks for sharing, Taylor. I’ve rode this route 3x now. It never ceases to take my breath away. I think it’s cool that someone organized a pedalpalooza ride for this. This is a good way to get people introduced to bike touring.