A day trip to Dodge Park 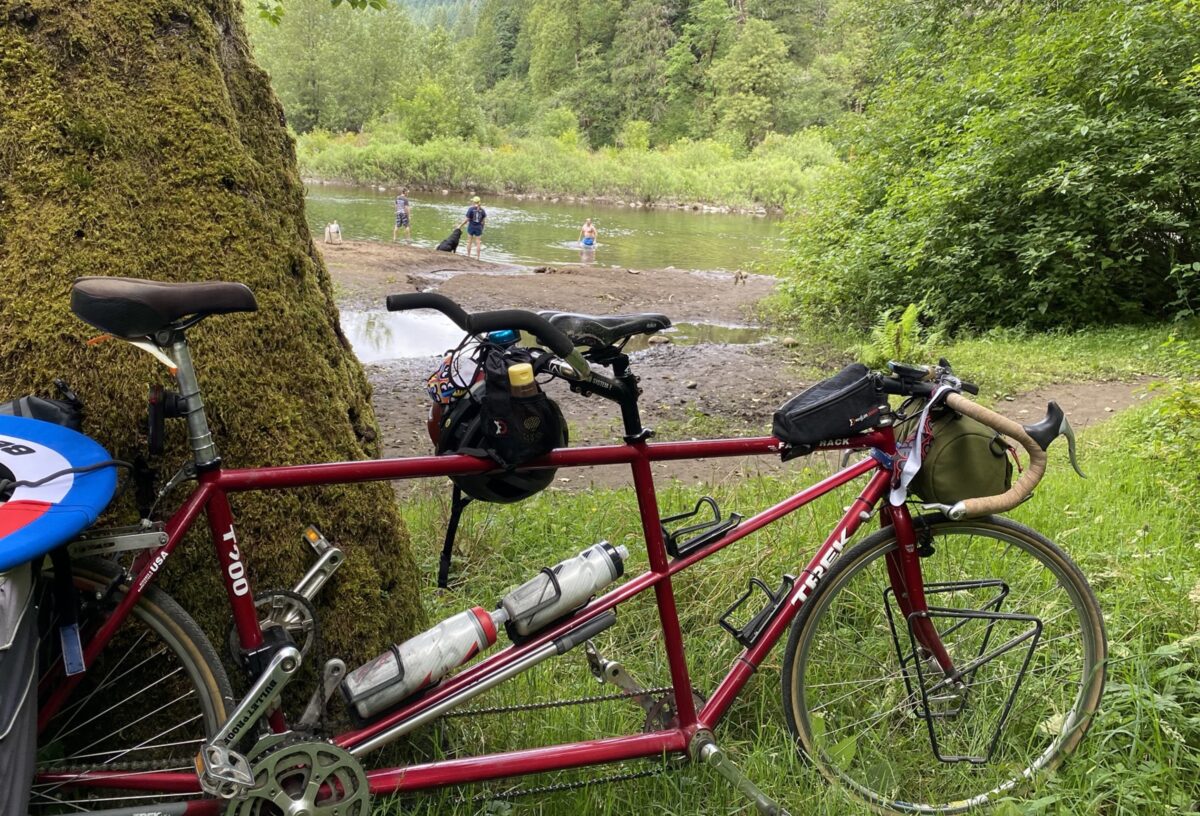 It’s easy to get to the Bull Run River from Portland, and there’s a big park to hang out in once you get there.
(Photos: Jonathan Maus/BikePortland)

If you’re looking for an escape from the city that you can bike to, Dodge Park is a great choice. You might remember when I shared my experience doing an overnighter there a few years ago. Unfortunately camping is no longer allowed (thanks to a budget decision by Commissioner Amanda Fritz last year), but at just 30 (mostly) flat miles away, it’s easy enough to bike to for a day trip.

My son and I returned to the park a few weekends ago and had a great time. Here’s how we got there:

Our route was mostly on the Springwater Corridor and the final 10 miles or so were on quiet rural roads. The only sketchy part of the trip was crossing Highway 26 at an unsignalized intersection. My advice: Be patient, wait for a break in the traffic and scoot across as fast as you can. (I personally prefer to use the center median space as a refuge and cross in two parts.) It took us just over 3 hours to get there.

Once you get to the park, there are lots of things to do. The upside of no camping is all the space available for hanging out and picnicking. We found a big spot in the back of the park amid the shade of tall trees to have lunch and throw the frisbee around. After that we did our favorite thing; climbing on rocks in the middle of the Bull Run River. Then we hung the hammock and read books for a while.

Even on a crowded weekend day it was easy to find spots to enjoy while maintaining a safe distance from others. Dodge Park sits at the confluence of two rivers (Sandy and Bull Run) and there are many river access points. On the Sandy River side there’s a long, sandy beach area and shallow water that’s perfect for dipping in.

If you’re a local history buff, you’ll be interested to know that the areas around Dodge Park were home to the Klickitat people for thousands of years before white people came along. It wasn’t until a weekend train and trolley service began in 1911 that the spot became popular with day-trippers from Portland. From then until 1930 you could hop aboard at Montavilla and hop off at the park! Check out the City of Portland website for more of the park’s history.

At the end of the day we had some family meet us at the park and take us home. It’s only about a 45-minute drive back to Portland — not as fun as a trolley ride would have been, but much faster!

Note: Because of the budget issues, the City has closed the bathrooms and turned off the water sources. So bring plenty to drink and if you need a restroom there’s a porta-potty on-site.

Great destination! And very smart advice on that 26 crossing, using the median. I would also add that scooching down like 100 yds will get you to the biggest part of the median, which feels even safer than doing it right at the intersection.

I just drove there for the first time a few weeks ago, and really enjoyed it despite it being a bit crowded. After a bit of searching I managed to find a little spot along the river to myself. Next time I go I definitely want to bike there! Thanks for sharing a good route.

I wonder if a solo rider, bikepacking overnight, would get get accosted by rangers. Any out of the way spots to set a tent? Hmmm

I wouldn’t recommend it. Pretty sure a camp host is still on duty. I definitely saw a big RV parked in the camp host spot. Keep in mind this park is owned/managed by City of Portland, not County or State. There’s also no secluded camp spots in the main park and all the land around it is USFS.

Nice Jonathan, this park is a gem. I’m sad I didn’t get a chance to bikepack there before it was closed to camping, but I can’t say I didn’t have the opportunity.

Were water spigots turned on so you could refill bottles? I might ride out there this weekend and I always like to top up at the park.

Thanks again for the write up,

Every time I see the old trolley lines of Portland mentioned it sends me down a rabbit hole of digging up old maps and pondering how much better our city could move if we hadn’t covered the tracks in asphalt.

It makes no sense that camping was ended at Dodge Park. Since the park is still open, and the “park hosts” are still camping there, the Water department still has some costs to maintain the property. But before campers were paying $25 a night to stay there. Now day use is free, but the overnight camping is closed? How does that save money?

If the Portland Water and sewer department no longer wishes to run this park as a campground, they should transfer it to the County.

This used to be the best destination for camping with kids by bike. Kidical Mass PDX camped there almost every other year for the past several years – there are several other options, but all are more challenging, farther, and with more traffic than the ride along the Springwater and the few rural roads to Dodge Park.

Huh, I think something funny must have happened with image processing in that lead photo, because the front tire looks like it’s overlapping the down tube. Which, if it were the case, would make the bike unsteerable. Well, you could only ride it in counterclockwise circles, I guess.

Sorry, as a bike mechanic, I’m easily distracted by these sorts of anomalies.

I think it’s just the perspective. The handlebars are turned toward the camera and the camera is slightly behind the headset, so from that angle the back of the wheel is behind the down-tube. If the camera moved a little lower and forward, parallel with the headset, and shot the bike perpendicular to the frame, the overlap effect would disappear.

I actually grew up just down the street… anyway. I’m pretty sure it was actually the Clackamas people who lived in the area. From what I can find the Klickitat people loved on the North side of the Columbia. Where did you get the information that it was Klickitat? I’m curious because most of my family still lives out there