I don’t think it’s a stretch to say Portland has one of the deepest, most diverse and interesting cargo biking scenes in the world. From couriers to businesses, families to freak bike makers, and everything in between. We’ve had cargo bike happy hours, we’ve had cargo bike parades, the person who literally wrote the book on moving-by-bike lives here, we were the epicenter of the Dutch bakfiets revolution in America, and we even used to have a cargo bike maker based right here in town (RIP Metrofiets).

So when we asked to see your Greatest Load Ever for a chance to win entry to the upcoming Disaster Relief Trials, I knew we’d get some great submissions. I was not disappointed.

And the winner is… Elle Steele!

Elle receives free entry to the June 11th event along with a prize package from Tern Bicycles and a set of vintage steel pint glasses from DRT.

Asked why she wants to compete at DRT, Elle said, “To prepare for upcoming apocalypse(s), zombie or otherwise.”

And when we asked her to describe her Greatest Load Ever, Elle shared this story:

I rode to the pet store and asked how much a bale of hay cost.

“Okay, where are you parked?” they asked.

“The bike out front.”

I go out to meet them at my bike. It’s being carried on a cart. The lady looks at my Yuba Mundo cargo bike and says “I’ll need to get some help.”

The thing is huge! I finally ask the right question. “How much does that weigh?”

“Sixty pounds.” (Yikes! I hadn’t anticipated it to be that big…)

What I actually say: “Oh. My kids weigh more than that.”

And Elle was so excited she entered twice. Her other submission was a bike-camping load she described as:

“This is all the camping gear plus two bikes for when the kids barf in the tent in the middle of the night and need to be picked up but you still have to get everything home.”

We love it! Thanks for playing Elle.

And here are some of the other great submissions:

Living in Chile, with a culture of disaster, and as a cargobike aficionado, I’m a long time fan of the event. It’s so interesting to see different ways to apply the everyday experience riding our own bikes, and learning new ways to solve the “how to carry this stuff” problem. As I live so far, this submission is just symbolic.

Helping a friend moving, I loaded his mattress and bed frame, carrying it on a single ride between the two houses (and, as a consequence of that day, with some friends started a cargobike collective for movings called @biciminga ✌🏾) 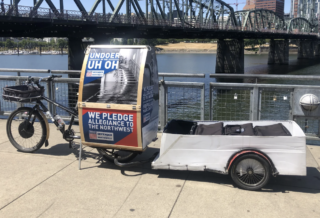 I love to carry stuff on my bike and help folks in need.

Christmas trees, children, adults, and enormous amounts of purchases. Family doesn’t drive so pretty much haul it all. I used to ride for Portland pedal power.

Hard to pick there have been many. But hauling home a pallet of four Norwegian urine diverting composting toilets I had ordered (they wouldn’t ship them by boat so had to get them from Air Cargo at PDX). After going through customers, their forklift loaded them onto my bike trailer. 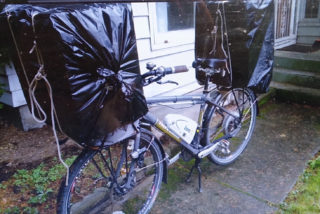 Two large cases of Diva Cups destine for the post office. I’ve hauled a 17′ canoe by bike but didn’t get a photo. 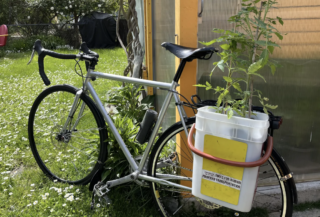 To show that people in their 70s can hold their own.

Thanks for playing everyone!

And don’t forget to join as at the DRT Pre-Event Social on Thursday, June 9th at Splendid Cycles.

Way cool.
Wonder if someone mass produced e-bike versions of cargo bike how many people might opt to use those to go say get groceries instead of by vehicle.