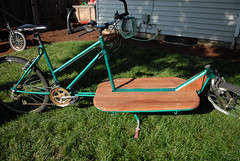 One of Tom LaBonty’s creations.
-Slideshow below-
(Photos © J. Maus)

Portland is truly a cargo bike lover’s paradise. Whether you want the legendary “bakfiets” from Holland, a less expensive version from China, a high-end custom version made in Portland, or a myriad of other locally available options, this town is a veritable cornucopia of cargo bikes.

New to the offerings are the whimsical creations of Tom LaBonty.

LaBonty — whose previous hobby was restoring muscle cars — now pours his passion into building custom cargo bikes out of found materials and garage sale bikes. A baggage handler at PDX Airport by day, the 39-year old Montana native was intrigued by a Worksman trike he saw being used by airline maintenance crews at the airport — so he decided to try and build one himself.

The trike turned out just O.K., but LaBonty’s big breakthrough came when a co-worker asked if he could build him a front-loader, “bakfiets-style” bike. “He gave me this old mountain bike and I just went for it. I quickly realized that the long-John was a superior design.” 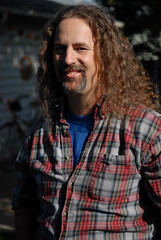 That was last summer. Since then, LaBonty has made 14 more of them. Now he’s got business cards and he’s displaying them at Last Thursday on Alberta. But LaBonty isn’t doing this as a business, he simply likes building them and — as a recent convert himself to daily bicycle riding — he wants to spread the two-wheeled lifestyle to others.

LaBonty lives right next to Lents Park, just a few blocks from the I-205 bike path. Last Summer — as gas prices spiked and the nation seemed to have the collective epiphany that there are other ways to move around besides personal motor vehicles — LaBonty says he also came to a realization. “Muscle cars were my thing. But I realized it was just a lot of money, space, and time I didn’t have. And for what? Just to drive them around by myself?”.

That realization helped stoke LaBonty’s new interest in building cargo bikes. He beams when talking about how he takes his 5-year old daughter to school every day on one of his own creations. “Biking’s just fun. Driving to the store in the car. Not Fun. Biking to the store. Fun.” 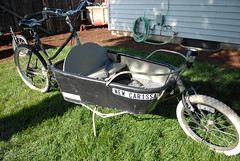 The “New Carissa” gets Tom’s 5-year old
to school.

LaBonty admits he’s “not a bike guy at all” but adds that he and his family are trying hard to drive less. “The thing with the car is that it’s just so darn convenient.” The cargo bikes make running errands much more possible, but the big game-changer will be when the new Green Line MAX opens up right around the corner.

When MAX opens (TriMet says mid-September), LaBonty plans to buy a family TriMet pass, let the tags and insurance expire on the family car, get a ZipCar membership and try to go completely carfree.

By that time, he may just have a nice little cargo bike business on his hands. With his mechanical aptitude honed from years of working on classic cars, LaBonty has figured out a way to take virtually any bike and convert it into a Dutch style front-loader.

“The idea is that people bring their existing bike to me, and I’ll build onto it.”

LaBonty has perfected the tricky spring-loaded dual kickstand and steering mechanism that are front-loader essentials. His bikes also feature scrap and re-used materials (he calls them “happy accidents”). For example; one of this cargo bins was made with left over heating duct material from a warehouse in his neighborhood, and the wooden cargo deck on another comes from a free pallet found in a pile down the street (one thing he doesn’t rely on scraps for is tubing for the main frame. LaBonty uses new stock because he wants to make sure it’s straight and reliable).

Other LaBonty touches include child seatbelts he makes himself from unclaimed luggage straps, cargo box edging made from old rubber garden hoses, and solar-powered lights attached to the bin.

Most of LaBonty’s sales so far (bikes range from about $300-$500) have come via Craigslist, including a guy from Aspen, Colorado who bought four of them for a local parade.

You can meet Tom and see a few of his bikes at this week’s Last Thursday on Alberta (look for him at around NE 28th). You can also contact Tom via email at tslabonty [at] hotmail [dot] com.

More info and photos in the slideshow below:

This guy is at least as awesome as I imagined he would be.

Wow. Just wow. The right price and completely irreverent…the perfect combination! I think I’ve found Clementine’s first bike. I’d like to have him make us a cargo bike with a baby seat that looks like a produce crate. Thanks Jonathan, for reporting on such fun stuff – you’ve solved our family’s latest challenge related to how to carry our infant. Woot!

He’s super friendly too. Though I knew I should of trademarked the coffin-cargo! 😀

Go Tom!
My father had that sort of adaptive engineering approach to materials at hand – it’s fascinating to watch the process. Couple that with Tom’s sense of whimsy and direct it toward bikes – WOW!
So Jonathan, have Tom and Brian Campbell ever met?

So not sure if I will get a bite but here goes. I think it is crazy that there isn’t a single place that makes a chainguard for anything over a 48t front derailleur! This is odd since the most common large gear on a front derailleur is 50t & 52t. I think that a local builder in Portland should step up! I know that I would by two right now.

The bait is set. Now I wait…

I hope his business takes off, cargo bikes are where it’s at!

$300-500 for a cargo bike??? That seems dirt cheap. I know the bikes are probably older, not-so-desirable bikes, but still, for a ride-around-town cargo bike, it seems extremely well priced. Please correct me if I’m wrong.

As we slide into public/corporate serfdom, I feel confident that a person like that will always be able to put bread on the table. Bravo!

A good city can NEVER have too many cargo bikes.

I think the 300-500 price is for the build up, using the bike you bring to him. Still seems like a very good deal.

Tom is a great guy and truly dedicated to his work.

If you have not seen his bikes at Last Thursday on Alberta st. you really owe it to yourself to do so.

Oh, and if you like them – BUY one! He has them for sale at Last Thursday.

For that price, he’s going to sell a lot. Heck, I’d think about buying one and shipping it to Baltimore…

Hey Tommy you’re doing a great job!!
You made a comment about that at the end of the day this isn’t a professionally made bike or something like that?
The only thing between the bikes that you make and a manufactured Bike by a factory blueprints, and the other thing is to if you are willing to build a somebody wants you are in a much better place then buying a pre-made cookie cutter stamped bicycle or cargo bike period. I encourage you to keep going with what you’re doing and of course keep your regular job because this is making a nice retirement job for you and who knows maybe you could sell out to somebody cash in after all the years of hard work and creativity.. Will keep up the good work my name is clay and I am from northern Maine