Hope remains for bike lane on SW Main, even with return of Elk Fountain 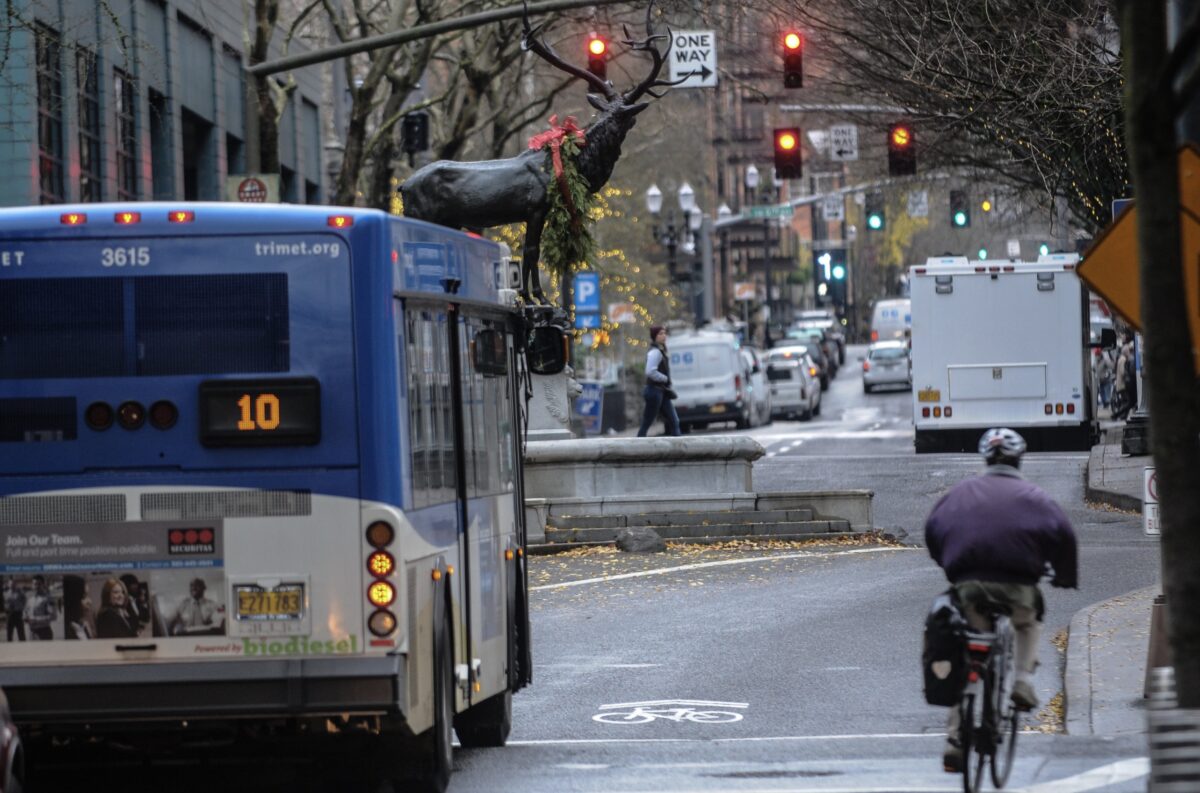 The Elk in traffic in 2017.
(Photo: Jonathan Maus/BikePortland)

The saga of the Thompson Elk Fountain – and the bike lane that may or may not accompany its homecoming – keeps galloping along.

“Commissioner Ryan thinks there is a way to figure this out and do both.”
— Margaux Weeke, Commissioner Dan Ryan’s office

Portland City Council will discuss a resolution to return the statue and its fountain in its entirety at their meeting Wednesday, continuing a political debate that has unfolded over the last several months.

In February, the Portland Bureau of Transportation announced the elk would be returning later this year or early 2023 – but without its full fountain base, a modification that would clear space on Main Street for a bike lane that would connect people from the existing bike lane on Main to the upcoming protected bike lane being built as part of the SW 4th Ave Improvement Project.

As anyone who has biked across the Hawthorne Bridge to travel downtown will tell you, it’s uncomfortable to switch from the bike lanes that exist on Main St between 1st and 3rd Aves to the shared-lane environment (with a sharrow) west of 3rd, especially on the narrow road around the elk statue base.

But several weeks after PBOT’s announcement, support grew for an idea to return the elk to its spot with its full fountain base in tact. City Commissioner Dan Ryan announced he too wanted to return the full elk fountain back to its old home.

“The restoration of The Elk and fountain is connected to the healing of Portland,” Ryan tweeted at the time.

To PBOT, the decision to put the elk on a new, smaller base was all about logistics. 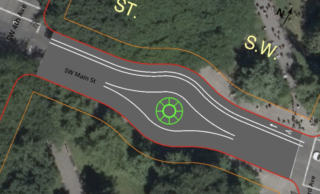 A potential design for Main St with a bike lane and smaller elk statue base.

Hannah Schafer, PBOT’s Interim Director of Communications, told BikePortland the transportation bureau has been wanting to fill in the downtown bike infrastructure map with a bikeway on this stretch of Main St for some time.

If the elk is returned in its former state, however, it is unclear if there will be room for a bike lane. In March, Schafer told us it would be very difficult to include a bike lane and the full fountain base, given how large it is. But supporters have a different take.

Last week, Commissioner Carmen Rubio joined Ryan and the Thompson Elk Fountain defenders to clarify their position, putting forth a resolution to work with relevant bureaus to restore the fountain in its entirety.

Margaux Weeke, Ryan’s Communication Strategist, told us today the plan is still in flux, but that Ryan is committed to figuring out how the fountain and bike lane can coexist, and he supports robust active transportation infrastructure.

“Fundamentally, Commissioner Ryan thinks there is a way to figure this out and do both,” Weeke says.

In the press release sent out Friday, Ryan and Rubio said the Portland Parks Foundation (PPF) board planned to hire a team with experience in traffic engineering (and other areas) to, “develop scenarios for how the right of way can be designed to accommodate the restored fountain and base while addressing safety concerns for pedestrians, bikes, transit, and automobiles.”

A story posted on Oregon Arts Watch Friday stated, “It’s considered likely that bike lanes… will be included in the reconfiguration.”

Some advocates have suggested a third option: include the full elk fountain, but make that stretch of Main St carfree. This would make room for a bike lane, and it would also allow people to walk up to the fountain and enjoy it up-close – something very difficult to do safely if drivers are speeding by. After all, this fountain was initially built as a watering station for horses, back before cars dominated the streets.

The elk resolution is set for Wednesday at 9:30 am and it’s the first item on the regular agenda so it should come up around 9:40 or so.

Update: On May 11, City Council unanimously passed the resolution put forth by Ryan and Rubio. As of now, it’s unclear how this will impact the proposed bike lane, but PPF will be working on scenarios in the following months. Stay tuned for more details as this continues to unfold.

Some advocates have suggested a third option: include the full elk fountain, but make that stretch of Main St carfree. This would make room for a bike lane, and it would also allow people to walk up to the fountain and enjoy it up-close – something very difficult to do safely if drivers are speeding by. After all, this fountain was initially built as a watering station for horses, back before cars dominated the streets.

Big AMEN! to this!

What do you do with the buses that run on main?

The proposal is to have it car-free, not bus-free — that is, for it to be a bus-only lane and a bike lane.

I don’t understand this comment? How would you be forced to bike “way out of direction”, if the bike lanes are right next to the car lanes that you’d otherwise be riding in?

Imagine if the situation were this: that stretch of main wasn’t there, it was a public park all the way across with the elk fountain as the centerpiece that people liked to hang out at. There was a bike path that went around it. Then, the city decided they wanted to pave 2 car lanes right through the middle of it, cutting off access to the fountain.

Move the curbs out, make room for bike lanes, done.

If there’s no room for sidewalk between curbs and trees, put the sidewalk on the other side of the trees, in the park. More pleasant for peds anyway.

The attempt to get rid of the elk fountain has nothing to do with bike lanes or bus lanes. Those are just the dog whistles used in an attempt to pit elk fountain vs bikes, a conflict that doesn’t exist, to achieve a different aim.

If you read the various statements and proclamations about this, you can figure out what the real “aim” is.

That doesn’t accomplish a main goal many people (like me) have–recreating the original situation for which the sculpture was designed, in which people are able to walk right up to the fountain and enjoy it, vs. it being cut off from human access and viewable only from a distance (and only from the sides) with motor vehicles whizzing past in the foreground.

Traffic coming off the Hawthorne Bridge west bound is routed directly on to Main St. It can’t go on the streets on either side (Madison and Salmon) because both are one-way east bound. So if Main is closed to cars, traffic off the bridge will have to make two turns and a detour to go east bound. It might work if traffic signals are adjusted/added for that detour?

I would like to see the park blocks “connected” at the elk fountain, with Main St there bike/ped only. I said bike/ped, not bike/ped + bus. Buses driving through a space still prevent strolling, lounging, skating, busking, vending, and all the things that make a park.

I think it’s worth figuring out how to do it.

Sounds like a great reason to move forward with a “car-free” Hawthorne Bridge…peds, bike bus, EMS, tram, taxi (not L/uber) …then less pressure for not re-connecting the Parks Blocks!

Literally no point to have the fountain surrounded by auto traffic. If cars must drive between the two parks (they don’t) then move the fountain where someone can actually see it. In the middle of the street makes it a glorified billboard.

Allow some summer cafes and vendors so the project pays for itself.

Wouldn’t a better symbol for Portland be a sheep instead of an elk?