The 120-year-old bronze elk statue that once stood tall in the middle of Southwest Main Street between Lownsdale and Chapman Squares in downtown Portland will make its return late this year or early 2023 – and with it, a new bike lane that fills a gap in the downtown bike network.

The elk statue, officially called the Thompson Elk Fountain, was removed in July 2020 after sustaining damage during the downtown protests that summer, but it’s been in safekeeping by the Regional Arts & Culture Council (RACC). It will return with some changes: namely, a smaller base that no longer operates as a fountain.

This will free up room to add a new bike lane to Main St that will connect people biking from the Hawthorne Bridge to SW 4th Ave. The new bike lane will create a safer connection to the protected bike lane that’s coming soon on SW 4th. PBOT plans to break ground on their $3.4 million SW 4th Avenue Improvement Project this summer.

Currently, there is a bike lane on Main St between 1st and 3rd Aves, but it turns into nothing more than a sharrow west of 3rd. There are no finalized plan drawings or sketches yet, as the official plan for the bike lane has only recently been decided.

PBOT says Main St will also see bus lane improvements through this project, as the smaller elk statue base will allow more room for TriMet buses to pass.

“It’s fitting that the elk – an important piece of Portland’s past – will help improve our transportation system for the future,” said Commissioner JoAnn Hardesty in a PBOT press release. “This project will be a big win for bus commuters, cyclists and, of course, the elk.”

It will take about a year before the antlered creature and accompanying new infrastructure hits the street, owing to red tape that must be sorted out between PBOT, the Bureau of Development Services and RACC.

Update: A reader pointed out a diagram that PBOT made during the initial planning process for the elk statue’s return and the changes to SW Main St showing one idea of what the bike lane might look like. PBOT Interim Communications Director Hannah Schafer said today that there is not yet a finalized sketch that includes all of the most recent updates, but here is the diagram from April 2021 for a potential idea of what this might look like. 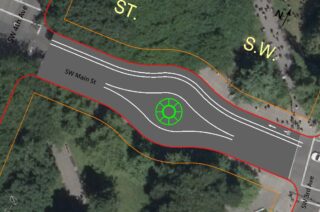 It’d be great to see this new bike lane stretch at least to Broadway or the Park Blocks.

Taylor – did they mention where the fountain / base is and may be reused?

I believe it was destroyed by the protestors.

Destroying racism by burning the Elk.

The burning of the historic elk was a symbol of renewal and hope for a better future. Just think of how much more human-centered infrastructure we could have if we de-preserved more historic infrastructure, edifices, and systems! 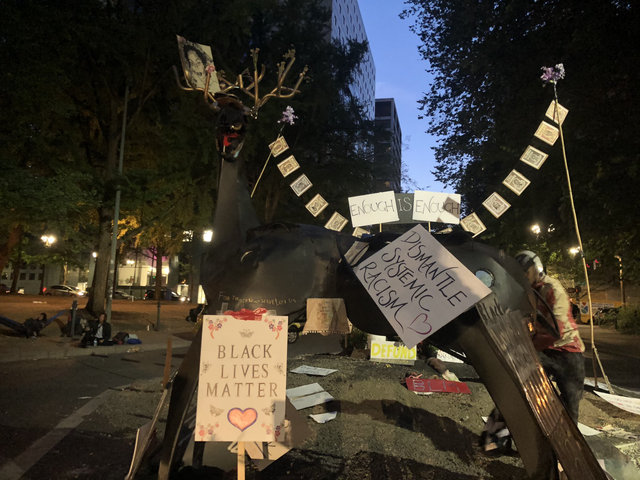 Chris I
Reply to  depreservationist

Amazing. Torching public art is “renewal” and “hope for a better future”. Congratulations on your hard work. You’ve ensured a rightward political shift in the voting base that will last for years in this city.

War is peace.
Freedom is slavery.
Ignorance is strength.
Burning the elk is renewal.

“We have always been at ware with Eastasia.”

So a smaller base, and it’s still in the middle of the street? How long until a huge electric pickup runs it over?!

That’s my commute. I would be SO STOKED for a bike lane up to Broadway. It’s the only part of my commute that requires riding uphill in front of cars, which is not my favorite. Of course, it’s been far less crowded since the pandemic.

Enh, that’s always been easy to take the lane and get through.

Yes, for a strong, fast, fearless cyclist. That’s what I do too (although I still get squeezed by rude drivers somewhat often).

But a bike lane will provide a safe facility for anyone riding there. I think the fact that the bike lane disappears a few blocks west of the Hawthorne bridge is a very serious impediment to a lot of people that would potentially view that crossing as a desirable commute.

I wish it were being moved to a location where you could walk up to it and appreciate it. When it was built, it was in the street, but it was pre-car. The fountain at the base for for horses to stop and drink from. You could walk up to it, see it from all sides, and even sit on the steps.

Once motor vehicles arrived, it became isolated. Walking, you could only see it from the sidewalk a lane away, and then only from the side. You can’t see it from the front without driving, or walking out into traffic. It deserves a location where it’s not just something you see while moving past it in traffic. You can argue that there’s merit in returning it to its original location, but the original character of that location was degraded once motor vehicles arrived. The original locators never intended for it to be unapproachable and isolated in the middle of moving vehicle traffic.

I agree entirely. It should be moved into Schrunk Plaza where it can stare down City Hall.

yup, 100%, it was ‘for the watering of the dumb beasts’ or some other old timey language when gifted.

I also don’t understand the desire to put it back in the middle of the street. Among other issues, the drawing (which I get is not finalized) certainly looks like it will include buses veering into the bike lane due to the curves. Why are we making things more difficult — for buses, bikes, walkers and vehicles — just to keep this sculpture isolated in traffic?

This is great! I’m super excited to see a bike lane going in here. When the bike facilities were upgraded in the area exiting Hawthorne bridge westbound a few years ago, I was incredibly disappointed that the improvements stopped at third. It’s a bummer that the original plinth that the elk stood on was destroyed, but it hasn’t been used to water horses for decades and it was the main impediment to extending the bike lane at the time. As others have said, I hope this is just a step along the way to extending the bike lane to Broadway.

I call b.s. This is a bad idea if engineered as the sketch indicates. A mini sculpture plinth and painted bike lane is an auto-focused solution.Full stop. The painted bike lane will no doubt be violated by motorists. They provide a false sense of safety to bike riders.

The fountain was an integral component of the sculpture and provides traffic calming as well. It should be recreated. F*cking over history for cars? No thanks.

We should demand more creative slow street solutions. Off the top of my head… how about making this a north side of the fountain bus only lane, shared bus/bike lane, or carefree segment instead? Add your idea here….

Just one last dig, traffic engineering truly is a “fraud discipline” as Jessie Singer points out in her new book, “There are No Accidents”. Please stop letting PBOT engineer our streets. We don’t need to subject ourselves than this mediocrity, our lives depend on it.

It looks exactly the same. I realize they are making the footprint smaller but getting jammed by cars and buses there is the norm. Why not move bikes to the right and both traffic lanes left? Allows for the statue to stand out and still be “visited” on foot. And agree it should reach Broadway.

Notwithstanding the needs for improved bike access/safety and improved maneuverability for buses, I am going to miss the fountain base. For me, it always represented a big “welcome” to downtown. As a kid, when driven by my parents over the Hawthorne bridge, as a teen when riding TriMet, and as an adult I’ve entered downtown using all modes (walking, biking, driving, transit). I’ve always loved just how many public fountains Portland had. One-by-one they are disappearing (at least two vanished from the Transit Mall in the 2009 redo), the majority of the original Lloyd Center fountains (not just in the mall, but in the plaza to the north). Newer fountains have come online over the years (waterfall in Pioneer Courthouse square, the reflecting pool and granite sphere in Director Park, Halprin Square, etc.), but to lose one that was front and center to the “main” entrance to downtown would be sad.

That said, I do also understand the argument that the fountain base is no longer useful, as auto-dominance of the street prevents people (and animals!) from safely relaxing by it. And, that the street represents the primary access for many transit routes and cyclists into downtown.

What do people think of a solution where the elk is still featured in the center on a pedestal (but with a healthy number of strong bollards around it to prevent collisions), but that a pair of fountains of a similar architectural style as the old base are placed along the street at the edges of both of the parks? Then, people could sit and enjoy the fountains, they’d still be visible as a big “welcome” when entering town, and the Elk could remain front-and-center while allowing a bit more room for bikes and buses?

To me, the introduction of motor vehicles on the street destroyed the desirability of that location for the statue. When it was built there, people could experience it–leisurely–from all sides. That experience should be restored, and it can’t be done leaving it in traffic.

The experience of seeing the statue in the current location is incredibly compromised. You approach it in traffic, you’re swerving around it in traffic, you can only see it from an angle, and–most weirdly–you only get to see its back due to the one-way traffic. And you really shouldn’t be paying attention to the road, not the statue.

The “main entrance to downtown” aspect isn’t compelling to me. What percent of downtown traffic goes past the elk? One percent, maybe? And those people get a crappy experience.

It’s telling that if you google “portland elk statue” most of the photos are taken from a view that can’t be experienced normally–standing in the middle of the street, facing east towards oncoming traffic so the elk’s face is visible. If the elk were relocated to a plaza, everyone could have that view, the fountain could be reestablished, and it would become an iconic Portland visiting/relaxing/selfie-taking spot.

I could care less about a bike lane here, when this route was on my commute I was preparing to turn left so I’d rather be in the left lane, plus it was soooo easy to take the lane here b/c of the statue in the middle of the road!