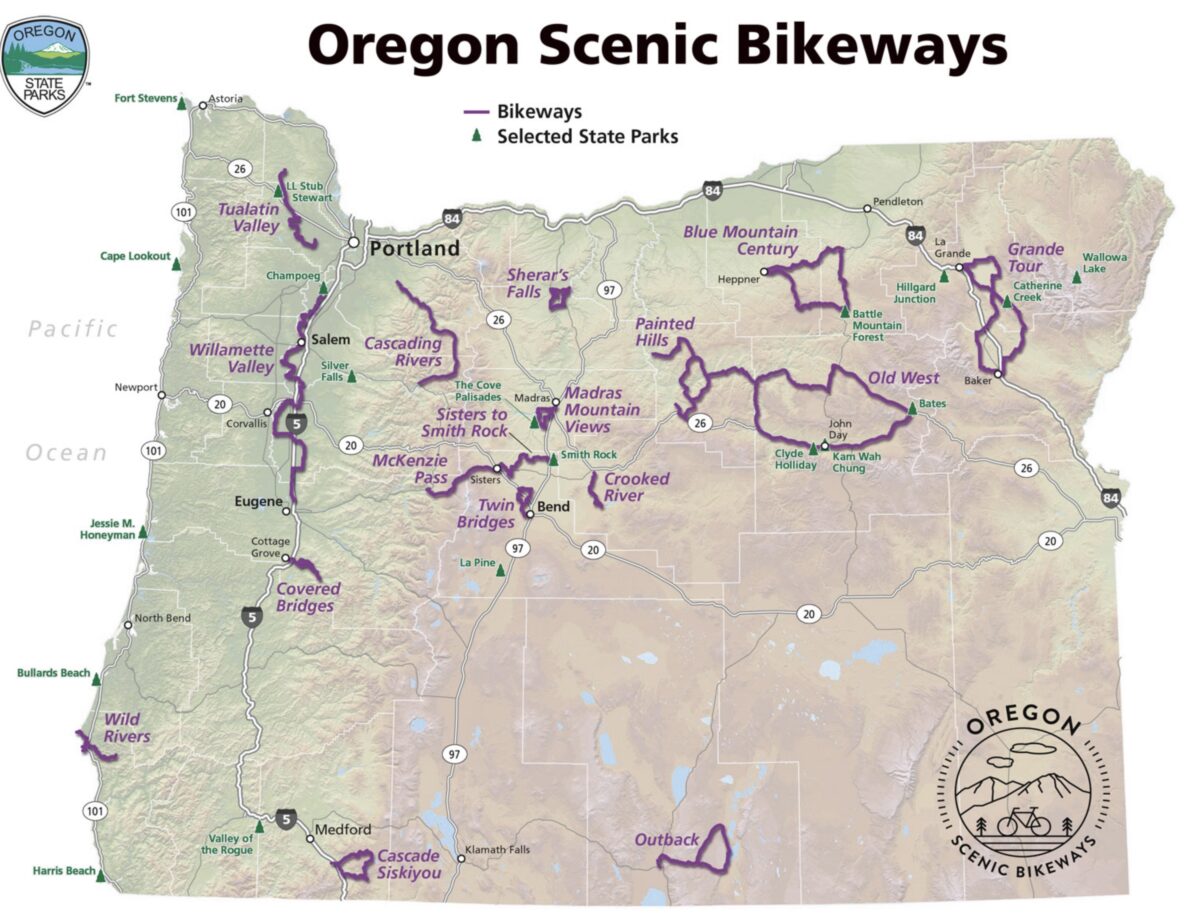 (Publisher’s note: This is our first story from cycling and travel adventure journalist Dan Shryock. Dan is a former editor of the Gazette-Times in Corvallis and News-Register in McMinnville.)

The Oregon Scenic Bikeway program, derailed since 2019, may be back on track thanks to a new partnership between the Oregon Parks and Recreation Department (OPRD) and Cycle Oregon.

The department signed a two-year agreement in February allowing the non-profit cycling organization to take over program operations previously managed by the state. Cycle Oregon will be paid $75,000 per year.

The Scenic Bikeway program, which was established by state administrative rule in 2008, features 17 designated routes throughout Oregon that were evaluated and approved by Oregon Parks and Recreation Department (OPRD). That effort was headed by the department’s bicycle recreation coordinator until the employee resigned in mid-2018. The position never was permanently replaced. Efforts took another bad turn in 2020 when OPRD made Covid-related employee layoffs.

This new arrangement is intended to jumpstart the entire effort, according to Steve Schulz, Cycle Oregon’s executive director.

“Cycle Oregon was one of the founding partners of the Scenic Bikeway program and we’ve used nearly all the scenic bikeways at some point (in event rides),” Schulz said. “(The) parks (department) has been great with it. We think we can help make the program even better.”

“[The] parks [department] has been great with it. We think we can help make the program even better.”
— Steve Schulz, Cycle Oregon

Under the agreement, Cycle Oregon assumes responsibility for many of the organizational tasks previously handled by OPRD including but not limited to reviewing and possibly making changes to existing routes, seeking new bikeway proposals from community advocates across Oregon, and finding ways to promote all routes. In keeping with past practice, any new route recommendations will be forwarded to OPRD for consideration and approval.

“We’re going to get the band back together and re-engage with the local proponent groups (who submitted past successful proposals),” Schulz said. “We’re then going to need other, more accessible routes. We need other surface types and we need to be more inclusive.”

Only a limited number of the program’s 1,260 mapped miles are flat and accessible to all riders. Of the 17 existing routes, only one is rated by OPRD as mild. Eight are considered moderate and another eight are listed as challenging or extreme. Cycle Oregon will try to find new proponents who see potential bikeways through a lens other than trying to create a long-distance road rides.
Schulz wants to see routes that get more kids riding bikes and provide accessibility for people of all abilities. A new bikeway, for example, may include optional distances for different skill and endurance levels. It may link with local parks, or it may follow a common theme such as a city’s historical district. Cycle Oregon wants to show communities the possibilities.

“The proponent group is responsible for it. We’re simply the tools to help them make it happen,” he said. “The program is built by the proponent groups. How do they want to engage bike tourism to highlight something in their community?”

But is two years enough time to get job done?

“We have two years to get started,” he said. “We’re talking with (OPRD) about something longer than a two-year program. Anything you want to fix up takes time.”

Near the top of Schulz’s to-do list is establishing a new volunteer route advisory committee. These are the people who would ride the routes and evaluate factors such as safety, scenic and geographic value, route options, and more. In the past, members of this committee served set terms and most of those terms have expired. A new committee will need to be created.

And nearly every existing bikeway is due for re-evaluation under OPRD guidelines.

Cycle Oregon also will be working with Travel Oregon, the state’s tourism marketing arm, to bring more attention to scenic bikeways overall. One fundamental purpose of the program is to stimulate rural economies by encouraging cyclists to stay overnight and spend money.

“I want to re-engage Travel Oregon,” Schulz said. “We need to have some honest conversations. What’s attractive for us to market?”

🚲 Of that amount, $6.9 million was spent on lodging and food. Another $5.3 million went to retail, including snacks, groceries, and gas to get home. About $182,000 was tied to entertainment, recreation, and cycling event fees.

🚲 Money spent along scenic bikeways directly supported more than 150 jobs with about $3.4 million in earnings and generated approximately $450,000 state and local taxes, according to the study.

After graduating from Indiana University’s School of Journalism, Dan worked as a reporter and editor for newspapers in Indiana, California and Oregon. Most recently he was editor of the Gazette-Times in Corvallis and as both managing editor and digital media director of the News-Register in McMinnville. He left the new business in 2015 and now writes about cycling, coffee and travel adventures. See more of his work at DanShryock.com

Great news, but 75K isn’t a lot of funding for this. Good luck CO, I’ve done a couple of these routes and look forward to your influence.

I was thinking the same thing. Unloaded, that’s one person’s part time job. Wouldn’t pay for any travel to the sites even. Let’s hope for more funding in the future!

Middle of the Road Guy
Reply to  David Klug

Less money for the state to mismanage.

These routes could be a great starting point for making country 2-lane roads safe.

This is great news! So glad to hear Cycle Oregon will be re- engaging with the proponent groups. I was the Scenic Bikeway Program lead for almost ten years. It was hard to watch OPRD stop caring about this great program. Will be really interesting and fun to watch Cycle Oregon bring it to life again. Very curious to see the more kid friendly routes they put into the program. It always did lack that, but that was largely because Oregon needs more bike lanes and paths.