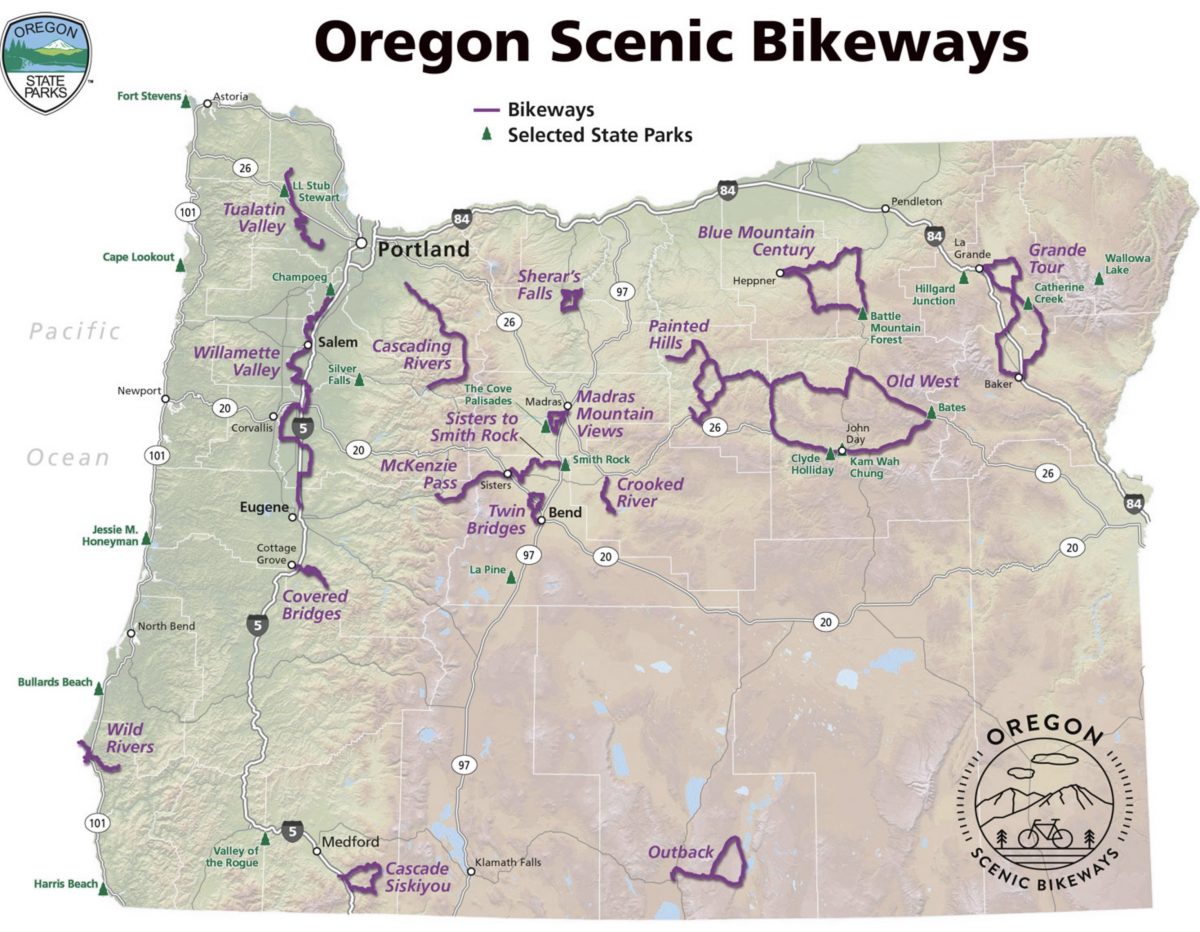 The idea was simple: Codify a network of Oregon’s best cycling routes into state law so that people could access a Cycle Oregon-like experience for free, any time.


It took about five years for the idea to materialize, with the first official public hearings in early 2008. The first one — the 135-mile Willamette Valley Scenic Bikeway — was designated in summer 2009 and today there are 17 of them scattered throughout the state.

The 1,253 miles of routes are vetted by a committee, signed, and promoted by the State of Oregon. In 2014, an independent study (commissioned by OPRD) found that people who ride Scenic Bikeways spent about $12.4 million at food, lodging and retail businesses along the routes.

The Bikeways program is a partnership between the Oregon State Parks and Recreation Department, the Oregon Department of Transportation, Travel Oregon, and Cycle Oregon (the nonprofit whose leaders spawned the idea in 2004). It’s the first and only program of its kind in the United States.

OPRD will commemorate its 10th birthday on May 3rd with a special event at the Capitol Galleria in Salem from 10:00 am to 2:00 pm. The free event is open to the public and will feature cake, gifts, guest speakers and the unveiling of the brand-new scenic bikeways map.

Get inspired to ride and learn more about all 17 routes via Ride With GPS, on the official Oregon Scenic Bikeways page, or from Travel Oregon.

I know they aren’t perfect, and that some of the routes would definitely benefit from additions that help protect cyclists from trucks and autos, but our Scenic Bikeways network here in Oregon is a unique and special gem. I have toured a handful of them over the years, including 4 with my (now 7-year-old) son, which are some of our most treasured memories. The various stakeholders have done a great job overall in selecting and enhancing some of the most beautiful rides in our amazing state while helping to cultivate social and economic opportunities for our fellow Oregonians who live in less-developed areas.

What would be great is if Washington county wouldn’t chip seal the road the minute it gets designated a scenic bike way. Seems to be a real lack of co-ordination between state and county on this.

One downside of a program like this is that it reinforces a common stereotype among the greater part of the population that bicycling is purely a recreational pursuit, that you drive to your favorite bike route, ride, then drive home.

My wife and I used the Willamette Scenic Bikeway to ride down to Eugene for my brother’s graduation. Several other routes can be used for non-recreational travel, as well.

To be fair, most of the bikeways are in “scenic” areas. Areas that see a lot of recreational travel.