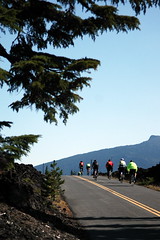 Next Wednesday, the State of Oregon Parks and Recreation Department will hold a public hearing in downtown Portland to hear feedback on a program that would designate and develop a statewide network of “Oregon Scenic Bikeways”.

On the table will be a new Oregon Administrative Rule (OAR) that would give “scenic bikeways” the same level of protection (known technically as a “Goal 5 resource”) currently given to everything from wetlands habitat to historic sites.

The scenic bikeways program was first championed by the Board of Directors of Cycle Oregon back in 2004 and now has the partnership of Oregon State Parks.

Jerry Norquist is the executive director of Cycle Oregon. He says the goal of the program is,

“to create a series of connected routes around the state that are scenic by nature. They would fit the mold of a Cycle Oregon route, but would be available to any one at any time.”

Norquist also envisions putting all the routes onto a website, making sure they’re well-signed and maintaining the road surface so that it’s adequate for bike travel.

“Imagine leaving your doorstep in Portland,” he says, “and riding to Vernonia and then up to Astoria along a continuous, official, signed route.”

The establishment of a scenic bikeway system could have a major impact on Oregon’s tourism economy.

“Imagine leaving your doorstep in Portland and riding to Vernonia and then up to Astoria along a continuous, official, signed route.”
–Jerry Norquist, Cycle Oregon

Oregon State Parks’ Bicycle Recreation Coordinator Iris Riggs says giving scenic bikeways “Goal 5” protection would mean that developers, for instance, “would either have to build around them or mitigate their impacts on them.”

According to Riggs, even if the scenic bikeways rule does not get officially adopted, the program will continue, “they just won’t have the same level of protection.”

At this point, plans for the first three scenic bikeways are already on the table: State Parks is working to re-route a portion the Willamette Valley Scenic Bikeway (the only one currently in existence, which was established prior to seeking official sanction); a route called the Calapooya Mountains Scenic Bikeway that will connect Oakridge to Eugene; and a route that would go from Portland to Champoeg State Park.

Ultimately though, Riggs says the program is being set up to be “citizen initiated”. This means that anyone will be able to submit an idea for a route. All proposed routes would go before a Scenic Bikeway Committee and would be vetted against established criteria before it could be officially designated. 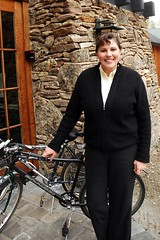 That same committee, Riggs says, will embark on a statewide planning effort to identify a system of routes that would have higher priority in the designation process.

Riggs has planned four hearings in the coming weeks and says that once they hear feedback from the public, they will revise the proposal and then take it to the State Parks Commission. Once the Commission approves the rule and/or makes changes, Riggs will then submit it to the Secretary of State where it will become official.

In addition to the upcoming hearings, Riggs says written comments will be accepted until February 15th (more info here).

For more information on the scenic bikeways program and the upcoming hearing, contact Iris Riggs at (503) 986-0631, or iris(dot)riggs(at)state(dot)or(dot)us.

This is the best news I\’ve read in months.

\”…maintaining the road surface so that it’s adequate for bike travel.\” Does that mean no chip seal on those routes?

wow what a vision. I\’ve always told myself
one day i will be able to bike somewhat
\” freely \”

For all of you that have never ridden out here in Eastern Oregon, we have plenty of roads that could be scenic bikeways. Come on out to Baker City some time and see for yourself!

#3 Rock Creek road is still beautiful, although the bottom part is desperately wanting repaving. And Old Cornelius Pass was repaved a couple of years back; it is really nice.

Spending money on bicycle infrastructure of any kind is great but scenic bike ways is not the best place to spend. They generate a ton of car travel to get to them because they tend to be in guess where, scenic areas away from the population base.

Yes these paths help to promote cycling but only as a recreational activity not as alternative transportation.

Spend the money on infrastructure that is going to get me from my home to my office, without using a car.

These scenic bike ways are not going to reduce pollution and traffic congestion. Paths that take people from suburban areas to mass transit or directly into the urban areas where they work is what is needed.

The Springwater trail is a good example of a path that promotes both commuter cycling and recreational cycling.

\”Yes these paths help to promote cycling but only as a recreational activity not as alternative transportation.\”

I would caution you against coming to conclusions on a program that is still in its infancy. Also, the details of the program do list \”transportation corridor\” as one of the many criteria weighed in designating them.

Also, the folks behind this effort have a strong desire to create a statewide, connected network of paths that will allow for the possibility of using these routes for transportation.

Also, remember not all bike-related things come from the same funding pot.

There is value in transportation-focused paths and routes, but there is also tremendous tourism and economic development potential and value in more recreation-focused bikeways.

Also, alphonse, there are some cyclists out there who do use the state road system to travel between metropolitan areas by bike. Sure, there are very few of them now, but the same could be said for bike commuters in Portland in 1983, when many of the early programs for urban commuting were first set up.

alphonse,
Since this is a State program, supported by taxpayers statewide, how about throwing a few crumbs to those of us who live outside the \”population base\”.

If the C-Z trail and the dreamed of Salmonberry Canyon trail are built, I could ride from my house to the coast without having to drive any part of it.

I\’m sure that there will be local support for scenic byways in Newport and Bend when the meetings are held there as well.

Jonathan,
Is the photo accompanying this article an example of what a scenic bikeway might look like? There is no shoulder! Riding rural roads that lack a paved shoulder always makes me nervous, especially at curves. It seems like car/bike collisions in such a setup would be inevitiable.

annefi, here\’s my $2 (adjusted for inflation) on the very pertinent question you raise – which could be more broadly stated as \”what makes a good – or bad – scenic bikeway?\”

Many rural roads do not, at least in my experience, have anything resembling a paved shoulder useable by cyclists. I\’d say you need at the very absolute least 2\’, and more like 3\’, beyond the fog line before it becomes at all useful. But: the real dealbreaker is traffic volume. For instance, there are some great Forest Service roads in our own Mt. Hood NF where you\’re passed by a couple of motor vehicles per hour, maybe. Lack of a shoulder is certainly not a problem here — the few vehicles that pass you can be heard from a long way off, and you as a cyclist can prepare yourself – if you\’re truly on a curve with poor visibility, as you refer to, then you can stop & move off the roadway to let the MV pass. I\’ve done this, but only very rarely – on tight curves drivers are generally going fairly slowly.

But, as traffic volumes increase, the experience for a cyclist with no useablr shoulder becomes increasingly unpleasant. You become entirely focused on listening (or watching, if you use a mirror) for overtaking vehicles. No fun. A recent bike tour in rural Florida took me on one road that was the longest cycling hour of my life – and we were only on it for 10 minutes. Shoulderless roads with too much fast traffic are just plain awful. And don\’t ask me about Florida drivers…

So what\’s the answer? I think there\’s no way around it, someone that wants to bike tour has to develop a certain degree of tolerance for fast overtaking traffic – that\’s the nature of rural roadways. We can wish the roads were all non-motorized extra-wide bike paths, but that\’s not gonna happen until the last drop of oil has been burnt. At the same time, there\’s a tipping point to how much passing traffic a cyclist can be expected to endure before they say \”this sucks\” – and that\’s the trick of designating a \”scenic bikeway\” – the threshold will be somewhat different for each rider. I think they – the State Parks Commission – need to be extremely thoughtful about what the traffic conditions are when designating a scenic bikeway.

So, as a rider in these conditions, you\’ve got to be willing to put up with some traffic discomfort at times, as well as have a certain amount of trust that the next passing vehicle won\’t run you over. If you aren\’t or don\’t, the bike touring thing probably won\’t work well for you.

Sorry for the long-wided answer, but your question was very thought provoking.