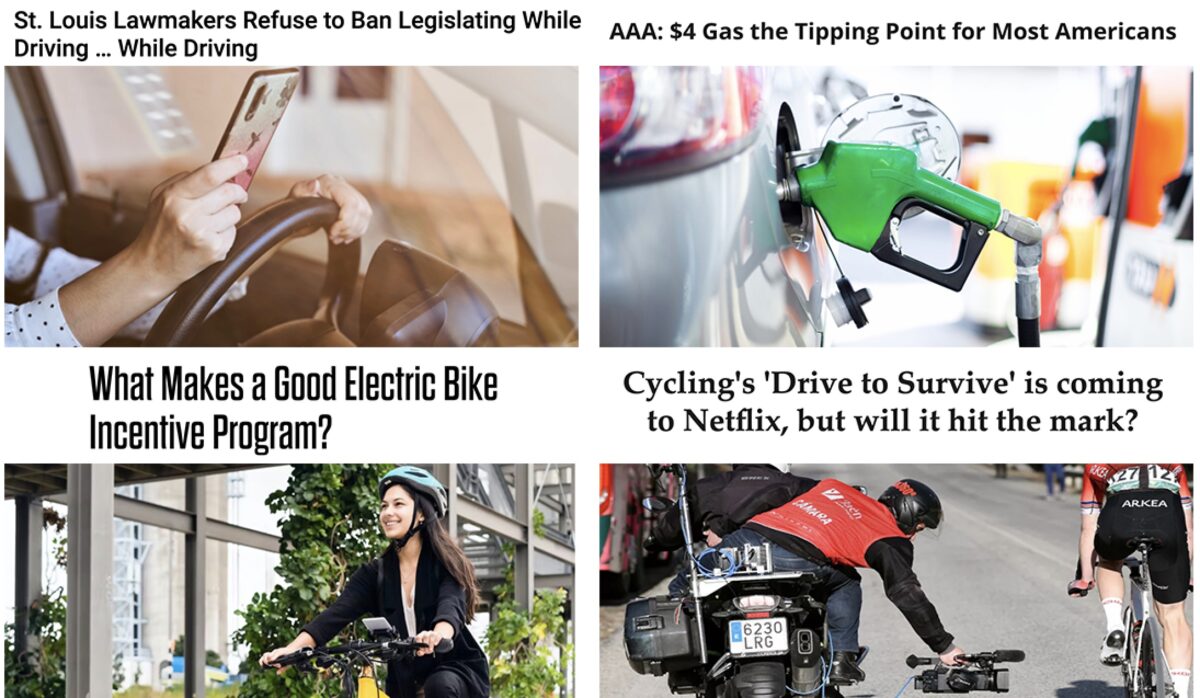 The psychology of dangerous driving: “While our driving is broadly governed by laws, our cultural assumptions about what’s permitted also matter a great deal,” writes the author of this WaPo op-ed on why pandemic driving styles persist.

The time is now: Transportation reform advocates and elected officials must seize the opportunity to shift habits given this new AAA survey of drivers that says 59% are open to a lower-car lifestyle and a whopping 80% say high gas prices mean they’ll look to drive less.

Quiet the noise: As someone who lives near a freeway onramp where people drive loudly, I am excited that Knoxville, Tennessee is piloting a noise enforcement camera at an intersection.

Mainstream media: Buzz (and some debate) is growing in cycling circles as Netflix embarks on a major film project that will follow several World Tour cycling teams.

Zoomstraced driving: America took another sad step in the march toward normalization of distracted driving when elected officials in St. Louis opposed a bill that would have banned councilors from using Zoom while driving during officials meetings.

Oil tax: Instead of reducing the price of gas like California Governor Gavin Newsom wants to do, Oregon Senator Jeff Merkley shared a better idea on Twitter last week: A tax on oil companies and a rebate to people to spend on fuel. Better yet would be if folks could spend that rebate to purchase an EV!

E-bike incentives: Speaking of an EV rebate, anyone interested in Oregon’s effort to pass an EV incentive bill in 2023 should read this excellent policy piece from People for Bikes that includes comments from Portland-based researchers.

About those e-bikes: What will come of all the e-bikes people are buying that have motors and batteries that many local bike shops don’t want to work on?

Bus lane in Hillsdale: PBOT wants to establish a bus-only lane in southwest Portland through the Hillsdale area while some local interests want more time to understand potential traffic impacts.

Thanks to everyone who sent in links this week!

Also, about those E-bikes. Batteries. Typically, batteries last from two to five years depending on quality and number of times they’ve been recharged. And, they cost between $500 and $1,000 dollars to replace provided they haven’t been rendered obsolete by product change in the meantime.

Which is why it is stupid to subsidize them… Most people are leasing electric cars if they have any sense because the technology will make todays models obsolete in no time.

Joe Manchin said he doesn’t support electric vehicles because he doesn’t like “standing in line waiting for batteries.” Yeah, this guy actually got elected by real American voters!

This country should definitely invest in the R & D for electric vehicles and batteries.. We should not be subsidizing E-Bike purchases over regular bicycles. Consumers should make that choice.

It’s only called NIMBYism when project supporters want to shut others out of the decision making process.

I can’t wait to see Drive to Survive, WorldTour edition. I’d welcome a chance to learn about strategy and personalities and see more behind the scenes of the peleton.

Too bad UAE and Tadej Pogačar aren’t planning to join the fun, though. I’d think Pogačar’s absence will dilute the story quite a bit.

Having previously lived along BHH, I applaud the bus-only lane on Capitol Hwy in Hillsdale, but what would be even more useful would be a bus only lane or some other traffic reorganization measure along Barbur Blvd in the section between Capitol Hwy and the Ross Island Bridge entrance. Or perhaps even a redesign of the entrance. Traffic gets really backed up before the Ross Island Bridge and that can easily add 15 minutes to a bus trip to downtown. I’m speaking from the perspective of a former 54/56 bus rider but hopefully it would be useful for other bus lines as well.

Also, real quick, should that say “Zoomstracted” instead of “Zoomstraced”?

Capitol used to be my on my route to/from work before I retired. What happens to the bike lanes on Capitol? It looks like they stay given what I see on the PBOT’s web page. Will buses be able to leave the bus lane to give bicyclists some more room, particularly on the uphill part of Capitol? I remember being close passed by buses a couple of times there. Not fun.

Also, can bicyclists use the bus lanes? It’s unclear given what I read in the how-to-ride-a-bike article, here:

and in particular, here:

The WaPo article reminds me of an illegal driving habit I now see most days, and sometimes many times within each day, that I rarely ever saw before the pandemic. That habit is people crossing the solid yellow line anywhere in a block in order to park on the opposite side of the street. I see this while working on Main downtown, one of the busiest parts of town. We have a high police per capita ratio, and nobody has ever called to de-fund them, but I have yet to see them discourage the practice.

What town are you writing about, if you don’t mind.

I’m also seeing WAY more wrong-side parking than I used to. In addition to personal vehicle drivers, Amazon delivery drivers do it constantly. Whereas I almost never see USPS, FedEx, or UPS drivers commit this offense.

You’re talking about wrong-side parking on divided roads though, right? Because Portland has many residential streets where there is no centerline, thus allowing parking in either direction on either side. (I’m not saying it’s safe, just saying it’s legal.)

The lack of a painted centerline does not mean there aren’t directions of traffic on those unmarked roads. You still have a duty to drive and park on the right side of the road.

Portland does, or did, ticket for wrong way parking:

“B. No person may park or stop a vehicle other than in the direction of traffic.”

For the Drive to Survive; they kind of already did this with The Least Expected Day. Granted it was one team and in Spanish so it feels like the American uptake was minimal. Hopefully this new series helps grow some love for road cycling.

This definitely seems like something that can be fixed at the ballot box. I thought JM’s use of the word ‘vigilantism’ for assertive internet activism by the bike rider in England was over the top, but anybody who openly promotes anti-social behavior can certainly get a wake-up call. Any voter who lives with a kid, walks or bikes near a road, or even pays for car insurance might like to know about this driving-while-meeting BS.

Last time I checked there was no statement from Mayor Ted sincerely regretting his conspicuous distracted driving. I’ll be looking for a candidate that is not him.

The bike / e-bike choice may not be the interesting one. There are so many bikes in storage in the USA right now, there’s a huge pool of possible riders with bikes in hand that just aren’t doing the thing. They aren’t in the acoustic bike market. Where the heck are all those COVID bikes?

The subsidy might weigh on the decision process of a person who has to replace a crappy car, or who has a love-hate thing with their perfectly fine car but sees bike riding as a sporty/athletic thing that they are not interested in. A subsidy would, in theory, shift the demand curve for e-bikes so more would be sold, at a higher price point. That makes dealers and builders more profitable so more enter the market. It also makes poorly built stuff less attractive so that e-bike adopters are less likely to have a bad experience.

The benefit may be, as X noted, that you’ll actually ride the ebike to work instad of taking your car and leaving your conventional bike in the house.

I could see where this might occur. For example, if you had to go up a big hill to get to work. But I’m not sure that’s very common, and I’m not sure how much difference the motor would make for most people. Safety, weather, etc. concerns may be more important to decision making. There’s also the option of choosing transit. Has anyone studied this?

Another possible benefit is that you’ll burn your house down while charging the e-bike battery and have to move in with someone else, saving all that CO2 spewing heating and cooling energy. Win-win. 🙂

About those e-bikes? Every single respondent in the linked article said they service all brands of e-bike including DTC, except the Pedego factory store, which only services their own brand. Where’s the controversy here?

The question was: “What will come of all the e-bikes people are buying that have motors and batteries that many local bike shops don’t want to work on?”

Many of the shops specifically said they do not work certain, mostly dtc, e-bikes or their drive systems.

Biowheels: “We only service the ‘bicycle’ parts, not the motor system”

N Plus One: “For electric dtc bikes, we take care of all mechanical parts as long as the customer takes the battery away with them…”

Folsom Bike: “Sadly, for electric bicycles, there are a range of potential issues that are beyond our scope of expertise, and we cannot perform the required services to stand behind the safety of these bicycles.”

Buddy Pegs Family Ride: “The only exception are e-bikes that have obscure batteries”

Moore’s Bicycle Shop: “For repairs on e-bikes that we did not sell, no customer batteries are left at the shop, and we only perform standard bike repair services, no electrical diagnosis or electrical repairs.”