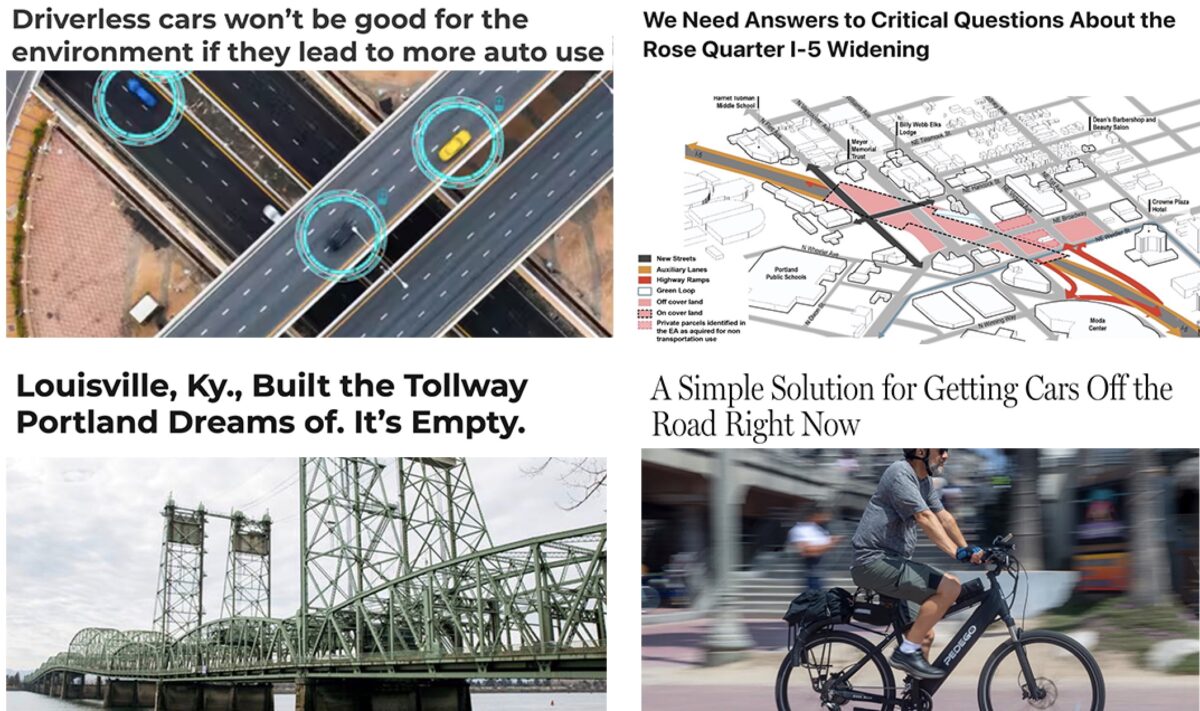 Welcome to another wonderful week.

Today’s Monday Roundup is sponsored by Nossa Familia Coffee, the locally-owned company that gives so many of us a great start to the day and also gives back to the community.

Driverless, not driver-more: If our society embraces new-fangled “driverless cars” without reducing their use overall, our environment might suffer terrible collateral damage says a new piece in The Conversation.

More press for Youth vs ODOT: Portland’s anti-freeway activist Adah Crandall continues to amplify the important connection between transportation and climate change on the national stage.

More bad news for ODOT: A local news outlet in Corvallis thinks ODOT is wrong to blame victims in deadly crashes at a notorious intersection.

Limit car speeds now: In 2021 police in Nevada issued 5,100 citations to people speeding over 100 mph in their cars. Let that sink in.

Rose Quarter questions: No More Freeways co-founder and ODOT gadfly Chris Smith says the time-out the feds have given to the I-5 Rose Quarter project is the perfect time to ask hard questions about the State’s proposed solution to traffic congestion.

Money where mouths are: The USDOT/FHWA has already acted to make good on a provision in Biden’s infrastructure law and the new National Roadway Safety Strategy by mandating that states spend at least 15% of highway safety funds on vulnerable road users if they make up more than 15% of total annual deaths.

Toll first: Willamette Week has a story about a bridge in Louisville where traffic evaporated when tolls were implemented and some say it’s an example of what could happen on the Interstate Bridge.

E-bike subsidies are a no-brainer: If you can get over the shade the author throws at e-bikes (like how they are uncool and can’t carry a lot of stuff), you can appreciate that an article that argues for more e-bike purchase incentives appears in New York Magazine.

Street dining fight: Portlanders who love curbside dining patios should pay attention to the debate in New York City where advocates are being forced to defend them against people who think the space should return to car users.

I can’t wait for the new ODOT crime thriller to come out. The plot is that someone at ODOT, working in concert with big-oil and big-auto is murdering non-vulnerable road users to keep the share of vulnerable road user deaths below 15%.

An active transportation advocate named… uh … Jon Katt is the first one to uncover the dastardly plot but, soon realizes there is nothing he can do about it because everyone considers the theory too far-fetched. So, Jon does the only thing he can do, he starts murdering vulnerable road users.

It’s a deadly game of one-upsmanship that will only end when the two killers meet for the ultimate showdown.

For the movie, I’m thinking Shia Leboeuf to play Jon Katt. Christian Bale as the ODOT killer. And, Donald Sutherland as the evil mastermind behind the whole thing.

Good for Adah. At her age I had none of her clarity and presence of mind, she is amazing.

If you read down the linked article you’ll see that ODOT’s “no-build” analysis of the Rose Quarter project assumes that a 10 lane CRC bridge has been built.

The article is really thorough and excellent. Even if you feel like you know about what Youth vs. ODOT has been doing already, it’s worth a read.

It assumes the 10-lane CRC/IBR because that is what is in Metro’s Regional Transportation Plan (RTP). Modeled results always rely on the RTP for the project list.

Okay, I’m probably going to be in the minority here, but after the virus subsides, I hope that curbside dining patios can be eliminated. I have no objection to outside dining areas per se, as long as they do not intrude into the public R-O-W. Otherwise, you’re just giving private business owners (capitalists = bad) a gift of public property.

Interesting. I would say if the choices are between “ROW for outdoor seating” and “ROW for parking” then I’m going to choose outdoor seating every time. While I hear what you’re saying about giving gifts to private companies, I’d find it a lot more objectionable if these were being constructed in front of Starbucks or McDonalds than pretty much all the ones I’ve seen, in front of independently-owned restaurants/bars/cafes.

Reserving ROWs for outdoor seating doesn’t only benefit the establishment’s patrons, e.g. the full street closures at places like SE Ankeny & 28th or SE Clinton & 26th: walkers and rollers get more pleasant and accessible spaces as well. (There are some configurations that legitimately make the sidewalk more difficult to navigate, especially if wait staff are serving patrons on both sides of the sidewalk, so I’d definitely be up for making those better.)

But I think what this points to is a discussion on how best to use the city’s ROW. Public streets are its most valuable asset, and we seem to have been doing fine by reducing some of their dedication to cars and using them for other purposes, even as traffic is coming back up to pre-pandemic levels. Giving them to nearby businesses is one option, but it’s not the only one, and whatever happens to these spaces they shouldn’t just be given back to cars.

It’s probably worth mentioning that the free use of the ROW for table seating by businesses is a temporary COVID thing – normally they’d pay the city essentially for the cost of permanently parking there.

With that said, I agree with both Jason and Ivan – free public gifting to private business makes me uneasy, but I do think it’s a better use than parking automobiles. I reckon I’d be okay with either going back to the pre-COVID workflow (businesses pay), or keeping those as benches/etc but for public use, not tied to any business (i.e., anybody can sit there, regardless of patronage) – though the city would naturally have to construct their own facilities or buy the existing ones from the businesses who spent resources building them (probably only to replace the ones that haven’t been build to any kind of code and look like they’ll fall in on themselves at any moment).

I love curbside dining patios, as long as they leave ample room for pedestrians to walk through. Even if I don’t dine at a particular restaurant myself, I appreciate the way it brings life to the street. I hope to see a lot of them become permanent.

“I have no objection to outside dining areas per se, as long as they do not intrude into the public R-O-W.”

But most outside dining has always intruded into the public way, because it’s been located on public sidewalks. I think outdoor dining generally contributes positively to urban environments, so I’d hate to see it eliminated. And since often the only location it can go is public r.o.w., I’d rather see it replace parking spaces than sidewalk area. I agree it makes sense to charge businesses for using the public space, just as people are (at least often) charged for using parking spaces.

Oh man, you didn’t post the link about the NYC citibike challenge? Shame on you!

WW, in its never-ending quest for more clicks, has done everyone a disservice by comparing a bridge in Louisville, which is one among MANY, with the I-5 bridge, which is one of TWO river crossings in the Portland/Vancouver metro area.

In Louisville, there are other bridges across the Ohio River—and even a free bridge close to the tolled bridges that offers commuters an escape option.

If you toll the I-5 bridge, cars will still come – even if you didn’t toll the I-205 bridge, which would have so much back-up that drivers would still choose to pay a toll. Of course tolling both bridges is the right thing to do.

Tolling just I-5 will cripple east Portland freeways for most of the day. People will sit on I-84 and I-205 for an hour before they spend $10 to use the new I-5 bridge. We must toll both bridges if the CRC moves forward.

This is my worry. Add in all the extra emissions in East Portland from that added traffic, and no thanks.