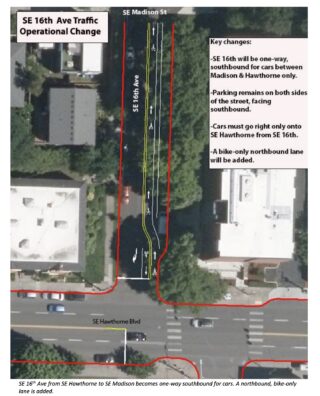 According to a letter sent from the Portland Bureau of Transportation to members of the Buckman Neighborhood, construction will soon begin on a project to turn SE 16th from SE Hawthorne Blvd to SE Madison St into a one-way street for car users. SE 16th Ave is a neighborhood greenway and one of the main routes for going north-south through Buckman and connect to bikeways in surrounding neighborhoods.

SE 16th Ave and Hawthorne meet at an off-set intersection. PBOT says turning SE 16th into a one-way for cars will shorten the crossing distance for people bicycling at the intersection.

People driving cars southbound on 16th will now be able to only to make a right turn and go westbound onto SE Hawthorne. This will clear up the crosswalk for people on bikes who won’t have to wait for drivers crossing in front of them to go east on Hawthorne.

“The main goal is to help align people bicycling at the intersection of SE Hawthorne to improve the signal operations and shorten the crossing distance,” PBOT program director Scott Cohen wrote in the letter.

There will also be a northbound bike lane added to SE 16th, but parking will remain on both sides of the street. 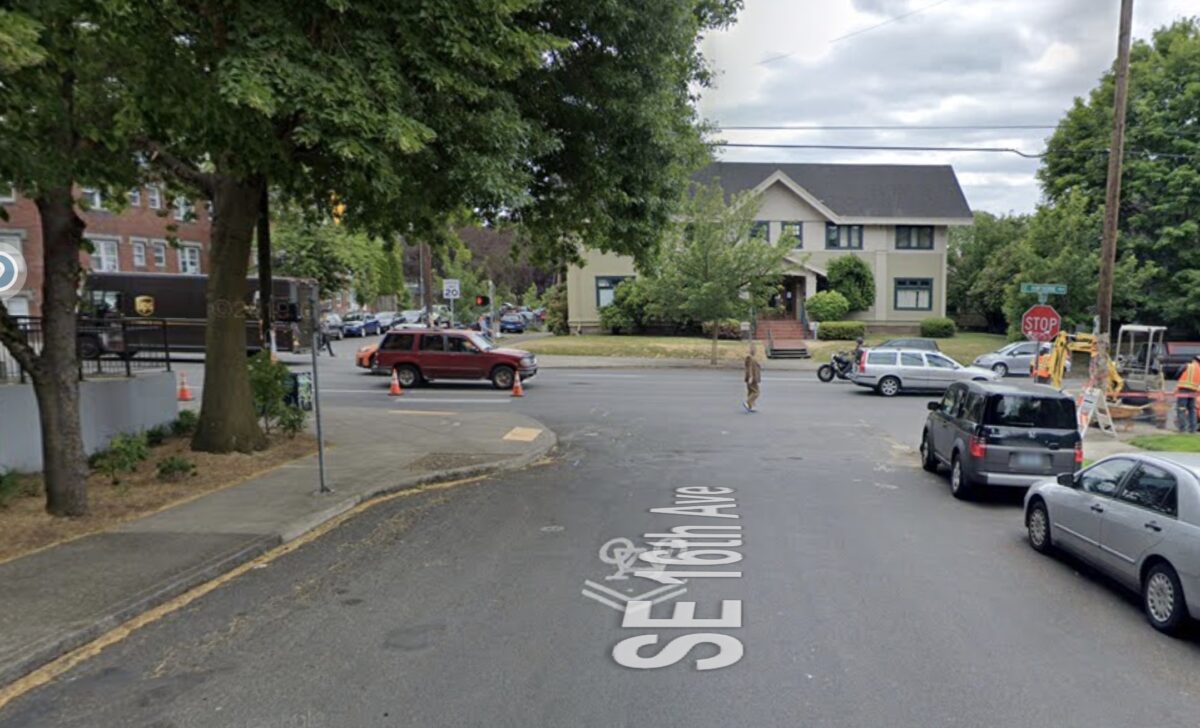 When the project plans were shared on local bike activism email lists, people were generally positive about the changes, but felt PBOT could do more to ensure bike safety at the intersection. The street parking on SE 16th may still get in the way of a well-functioning bike lane on that street, and it appears PBOT doesn’t plan to place any traffic calming measures on the street to ensure that drivers don’t take a left turn onto Hawthorne.

“This is an improvement. Unfortunately, I don’t see anything about signalization for southbound bike riders,” someone on the Shift listserv thread said. “Also, I would like to see a concrete planter placed adjacent to the new (upcoming) contraflow bike lane to prevent drivers on Hawthorne from turning onto 16th and northbound drivers on 16th from going through.”

No changes are currently proposed north of SE Madison on SE 16th or south of Hawthorne. Hopefully this small change will make it easier for cyclists to cross Hawthorne at this tricky intersection.

PBOT says construction is expected to begin this spring.

Great, but can the City also remove the parking (2 blocks) along the east side of SE between Hawthorne and Salmon to make a safer connection from the improvements they made to the west?

So there can be a safer connection from Hawthorne EB to the Bikeway on Salmon. The N/S Bike lane stops halfway between Madison and Main

This is ridiculously unnecessary and PBOT’s reasoning doesn’t make one bit of sense.

By prohibiting the southbound left turn it makes it safer for pedestrians in the crosswalks, for one thing.

It’s a safety hazard to have cars making left turns right into a signalized intersection, so when streets are offset like this it’s a good safety improvement to prohibit left turns. This also improves safety by separating bike movements from car movements. What’s not to like?

I don’t understand the Shift comment about needing signalization. There’s already a signal at this location, and I assume the signal is either going to be set to change automatically, or detection will be used to detect bikes and trigger the signal. It wouldn’t make sense otherwise.

It’s funny, there’s a sensor with the little biker painted in white for southbound riders there already, but I almost never see anybody who actually notices that it’s there. Pretty much everyone rides onto the crosswalk & hits the beg button.

That southbound pavement sensor has been broken for a long time, so regular riders on 16th have learned to avoid it.

Yeah that thing’s been on the fritz for months, but even when it worked I think hardly anyone noticed it. It’s pretty hard to see! I’m glad for this change b/c if nothing else the green paint will be more semaphoric

Safety red flag – PBOT has the east side car parking facing south! This ‘backwards parking’ is generally illegal based on the idea that the driver is now on the curb side and can’t see past average [read: giant] vehicles parked in front of them; AND the driver pulls out into an oncoming bike lane. I’m not comfortable with contra-flow lanes anyway, but this is head-on madness. This should not be legal.

In the spirit of Open Streets, it seems like a missed opportunity to convert some public street space from car parking to a clearly safer, curbside bike lane. Certainly a higher/better use of that space.
There appears to be little demand for parking here. There’s an apartment building along this entire blockface, and it has on-site parking. And it’s ONE block.
Granted, it’s a low traffic street, but we should plan for potential future growth.

Hope there are plans for one of those big round planters we now see at many greenway entrances on the Hawthorne end.

This design is actually perfectly legal and safe, and is used all over the Pearl District and NW already. Go take a look at Flanders or Johnson sometime. It works totally fine.

Backwards parking does not work fine. I’ve had several close calls with people pulling out blindly into me (and of course also not signaling, because turn signals are for the weak).

Based on how many drivers ignore the right-turn only signs & paint along SE 20th, I don’t have a lot of hope that drivers will refrain from turning left on Hawthorne without some hardscaping.

In general, though, I think this is a good move. Though the way the title of this story was structured I initially thought it might be about a bike lane *on* Hawthorne *at* 16th (because the four-driving-lane format from 12th to 20th is stupid and dangerous), but no such luck. Sigh.

I use 16th from Ladd’s daily, and it’s very low stress compared to other streets I use. I really don’t see the point of this change. Make a small stretch of road inconsistent with biking in the rest of the city.

Put more diverters on Clinton instead, maybe? Rake in a several thousand dollars ticketing people parking improperly (double or on no stopping/parking zones) in front of my kid’s school?