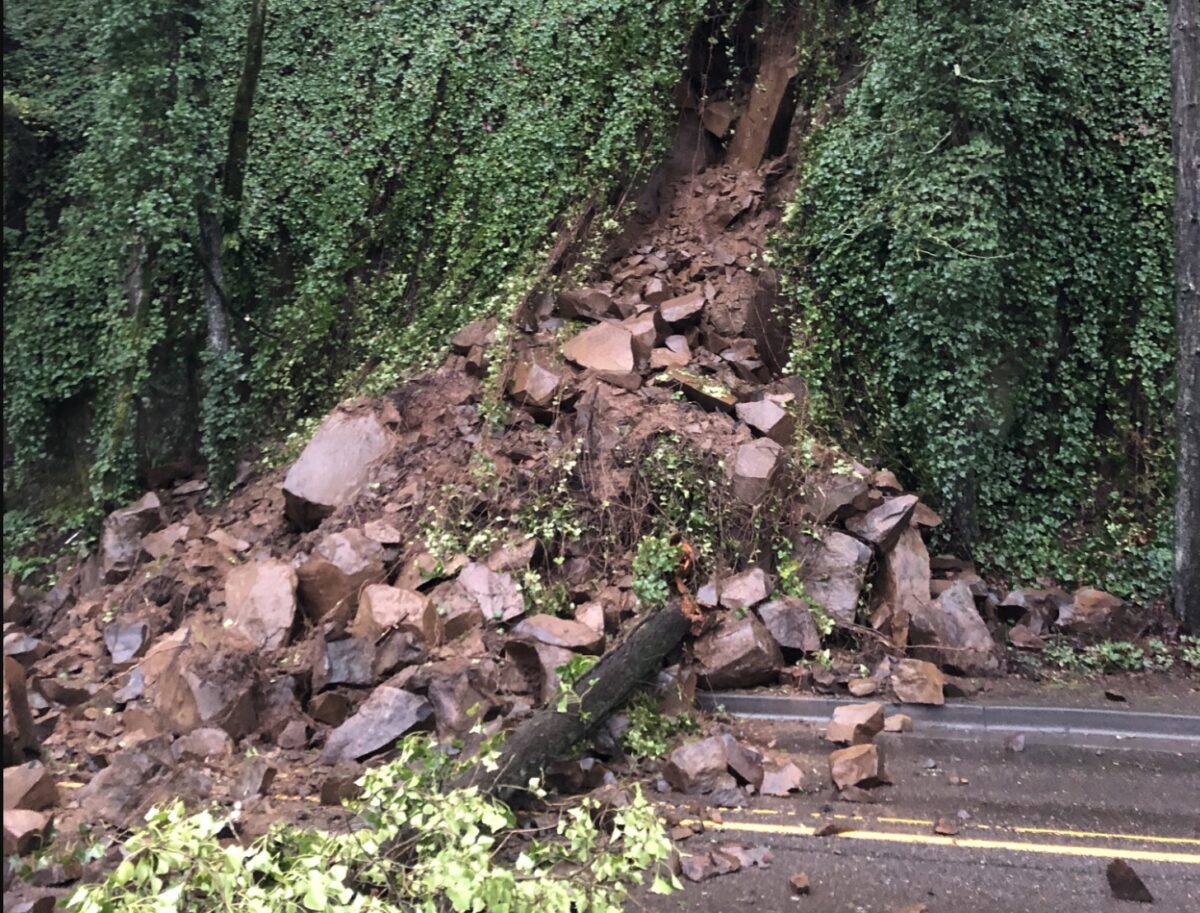 The rockfall on Bridge Ave as of January 6th.
(Photo: ODOT)

A key route in northwest Portland will be off-limits until at least late March says the Oregon Department of Transportation (ODOT). 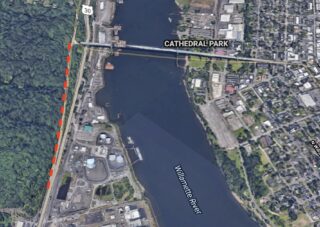 The southern leg of NW Bridge Avenue adjacent to the St. Johns Bridge has been closed since January 5th and will remain so for 8-10 weeks, according to an ODOT announcement late Thursday.

The agency will do emergency repairs to the road and hillside and will install a “pinned mesh” system to stabilize the slope.

This section of Bridge Ave borders Forest Park and is a popular way to access Highway 30. With its closure, be aware of detours and increased traffic on the north side of the bridge.

If you are going northbound on Highway 30 and want to get up onto the St. Johns Bridge, you’ll need to continue under it and then loop back around on the north side. This requires you to merge into traffic lanes and wait for a signal before making the left turn from Highway 30 up to Bridge Avenue. Please use caution in this area. You might recall the injury collision between a bicycle rider and a driver at this intersection in May 2020.

Hopefully ODOT gets the road reopened as soon as possible and no later than early April. With any luck they’ll use this opportunity to patch a few big potholes on this route that make sharing the road with fast car drivers even dicier.

The utility poles in the sidewalk on Bridge Ave are an ADA violation. Maybe they could fix those too. They block people using mobility devices the same way the rocks block the vehicle lanes.

I can’t believe they still have 2 uphill lanes in this section. There is enough roadway space here for a 2-way MUP on the east side, and a bike lane on the west side.

That would be nice. I think they view the 2 uphill lanes as a way to keep vehicles from backing up onto hwy 30. I used to ride home that way years ago, was never a fan of all that traffic backed up and trying to ride around, or on the sidewalk with the poles. A bike lane makes too much sense…

I think the issue is that ODOT doesn’t want bridge bound traffic to back up into St Helens. I used to ride the 16 from time to time, and during evening rush hour, there were always huge queues waiting to cross the st johns bridge. Both lanes fill up with semi trucks and commuters on their way to Washington who bypass I-5 through downtown and North Portland. If there weren’t two lanes, the tail of the queue would extend some distance back onto St Helens. It already does back up that far sometimes.

I don’t know if there is some way to fix the bridge intersection to allow traffic to flow into the bridge with fewer delays. I imagine their isn’t, as it’s a three way intersection with pedestrian phases.

Regardless, the sidewalk should be fixed. It’s a shame that the operator of the utility line can’t be made to get their poles out of the sidewalk

Silly man. Only people in cars are people. /s