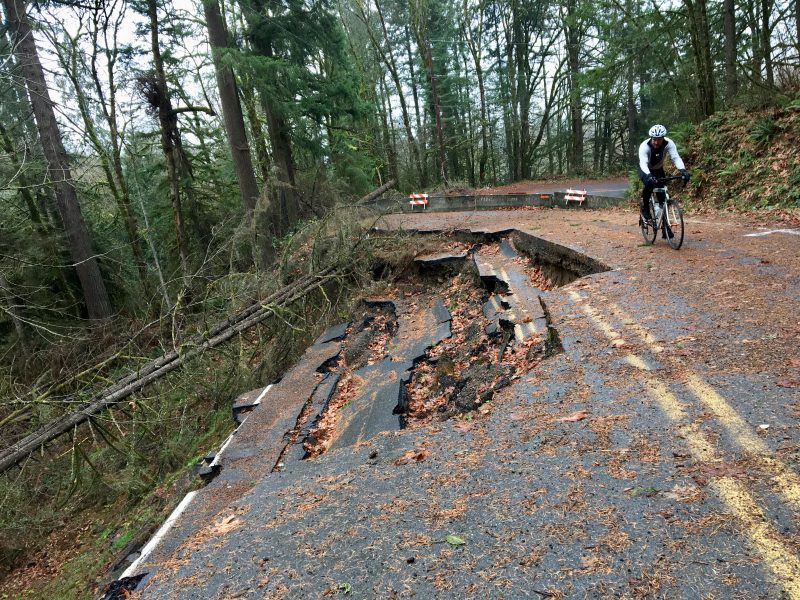 It looks bad, but it’s good on a bike.
(Photo: J. Maus/BikePortland)

I have some bad news. Unless, that is, you drive a car on NW Newberry Road. 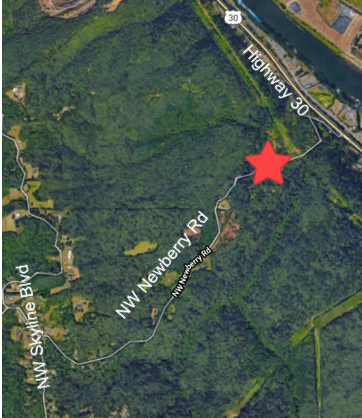 Slide is marked with a star. Newberry is about a half-mile south of Sauvie Island exit off Highway 30.

One of our area’s most popular climbs has been carfree since a major landslide destroyed a section of it one year ago. Newberry Road snakes up from Highway 30 about 10 miles north of downtown Portland. It’s part of many nice routes from Skyline Road and other destinations well beyond. It’s so well loved that River City Bicycles even made a short video about it recently (which has a great shot of the damaged section of road):

During major storms last year, half the pavement fell into the hillside. The damage is about a half-mile up from Highway 30 and Multnomah County was forced to close the road to auto users. People can still drive their homes from the top or the bottom, but no through driving is allowed. The result has been a blissfully quiet road you can climb without the stress of passing drivers or the toxic fumes that come out of their tailpipes. Being carfree has made a good climb, great.

Unfortunately Newberry’s carfree days are numbered. If things go according to the County’s plan they’ll have it rebuilt by this summer next winter.

According to Chris Fick, chief of staff for Commissioner Jessica Vega Pederson, they’ve nailed down the $1.8 million needed for the rebuild (with funds from the Federal Highway Administration).

Fick says there are two property owners the County is currently negotation right-of-way issues with, but the design work is 90 percent complete. Once construction begins (either this summer or fall) it should take about four months to finish. At the latest, it will be re-opened to drivers by this coming fall winter 2019.

So get out there and enjoy those peaceful pedal strokes while you can.

Acres of the adjacent residential property is just grass opposite of that landslide. Not much is holding the earth.

That’s a bummer – have been riding that a lot lately and it is so nice to not have the normal traffic on it. I wonder if the locals care.

Dang. Hopefully the signs announcing its reopening are subtle/nonexistent.

quick note: I was a bit off with the scheduling. Construction could begin this summer or fall, and that means it would be open by this by winter 2019 at the latest.

Yeah we sure like it the way it is also.

I forgot about that video! Thanks Alex. I’ve added it to the post.

That photo makes me feel as if I am getting a glimpse of the future of automobile infrastructure.

I feel like strongtowns would tell us to investigate whether we want to maintain this road long-term. there are other options like not rebuilding that would be a lot cheaper. However it does shave a few minutes off my commute when US-26 is backed up so maybe I should be in favor of this? But not in the current financial climate of road maintenance

What do you mean drivers’ user fees don’t pay for roads?

I wish we could keep one paved road from 30 to Skyline car free. Sadly, I guess not.

Multnomah County is transferring Cornelius Pass to ODOT. They are tired of dealing with the cost of crashes and the mess.

Logie Trail seems like a good candidate. Semi truck got stuck in the turns up there a few years ago.

Not paved, but I would rate Saltzman as car free and able to accommodate any bike tire.

I sure hope that a rascally band of vandals does not take this an inspiration and “deconstruct” strategic bits of Portland streets to create defacto safe bikeways.

Let’s hope not…because other bands of rascals may take it upon themselves to remove bike infrastructure.

Dang… if only ODOT could fix the Barbur viaducts just as quickly.

Any chance a narrow slice of the road could remain open to bikes during construction?

Vote Up0Vote Down  Reply
« 20 mph speed limits: What they said about it at Council and what you need to know
Council hears concerns about I-5 expansion impacts on Tubman Middle School »