From St. Johns to Mill Park: Biketown set to expand into north and east Portland 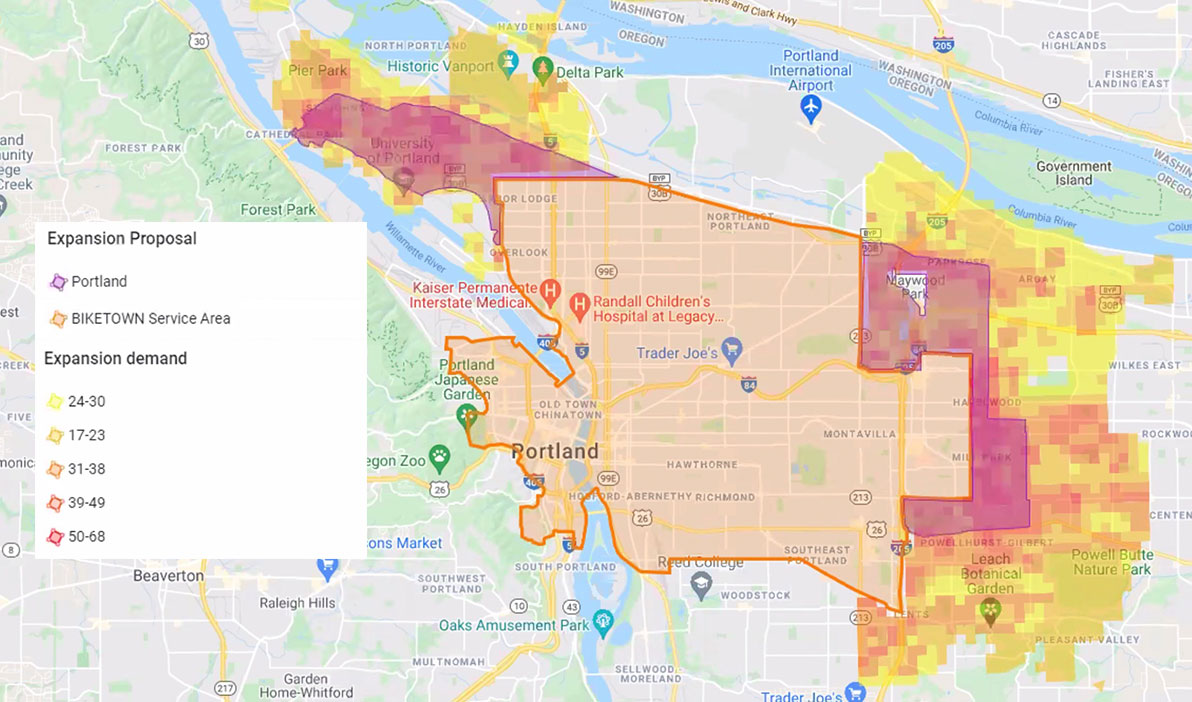 Remember back in June when we shared news of an upcoming Biketown service area expansion and encouraged you to tell the Portland Bureau of Transportation where new Biketown stations should go? At last night’s Bicycle Advisory Committee meeting PBOT revealed the results of that outreach.

Get ready to ride if you live in St. Johns, Kenton, Mill Park, or Parkrose! 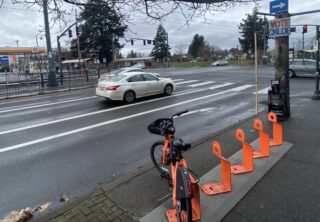 A station on N Interstate and Lombard, the northern edge of the current service area.
(Photo: Jonathan Maus/BikePortland)

Here’s what we learned at Tuesday’s meeting…

According to an overview of the current system from Biketown Senior Operations Manager Kanika Agrawal, bike share ridership numbers have almost recovered to pre-Covid levels. Agrawal said there are over 200 stations (a mix of Biketown-branded and geofenced parking at blue staple parking corrals) and they’ve logged nearly 365,000 trips since the big expansion and addition of e-bikes in September 2020. She also shared that since the 13-mile service area expansion last year, 13% of all rides taken were in north and northeast Portland and 6% of them were in east Portland.

In addition to assessing existing rider behaviors, PBOT used BAC committee feedback and public survey responses (500 responses and 1,500 station locations) garnered this past summer to come up with a new service expansion plan.

Also at last night’s meeting, PBOT Bike Share Program Manager Steve Hoyt-McBeth put the upcoming expansion into context. When Biketown launched in 2016 it had a service area of just nine square miles. With a 13 square mile expansion last year the map covered 32 square miles of Portland. The next expansion on the table would boost the footprint another eight square miles. “When you look at the entire footprint of the city [that] seems fairly small. But for bike share it’s actually very big… that’s almost doubling the original service area.” 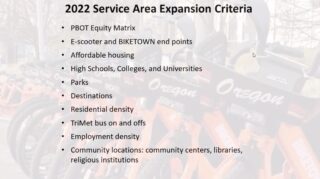 Based on feedback and a list of criteria (above), the proposed expansion will reach into downtown St. Johns in the north and the 122nd Avenue corridor in the east as far south as Powell Blvd. This means we’ll see Biketown stations and bikes in places like Cathedral Park, around the University of Portland, Kenton and the New Columbia neighborhood in north Portland. And in east Portland, folks will be able to hop on an orange e-bike in places like Parkrose Transit Center, the Powell Blvd corridor, David Douglas High School, and so on.

“What we’ve heard is that it’s just not financially feasible without public money… I think it’s beyond time to revisit this conversation.”
— Iain MacKenzie, BAC

BAC members had a few questions and concerns for PBOT staff. One of them, Reza Farhoodi, pointed out that a larger service area without adding new bikes would only dilute the service. “It’s already an issue finding availability of bikes at stations. So is there an update on when we might expect to see more bikes added to the fleet?” he asked. That issue is on the radar, PBOT’s Hoyt-McBeth replied, but he had no specific timeline to share.

BAC member Catie Gould questioned why no service would be added to the mid-southeast neighborhoods like Woodstock and Mt. Scott-Arleta. Hoyt-McBeth said they’re aware of demand in those areas, but they didn’t score high enough in the city’s equity analysis.

The most popular comment of the night came from Iain MacKenzie, who said it was time for the city to make good on its promise of a “citywide” Biketown system by investing public funds. Despite Biketown’s success as a public transit system, initial skepticism and general anti-bike bias has fueled a “no public funding” stance since the idea was first hatched in 2007. “What we’ve heard is that it’s just not financially feasible without public money,” MacKenzie said to Hoyt-McBeth. “And I know that before it even launched City Council was very adamant about not putting any public money into Biketown. None of those [council] members against [the funding] still sit on City Council. So I think it’s beyond time to revisit this conversation with city council and say, if we really want to make this citywide, this is the amount of money we need to put into it.”

Hoyt-McBeth thanked MacKenzie for his feedback and offered no other response.

Stay tuned for the full public reveal and more details of the service area expansion.

Cheers to Iain for raising this issue! I do find Biketown to be a bit pricey and appreciate the push to reconsider public funding. Making Biketown more affordable to more Portlanders would undoubtedly be an excellent public good.

Oh, and I do have a question. I poked around the Biketown website and couldn’t find this information. Is Biketown still technically 18 and up only? Because it sure does seem like an excellent way for students, not just teachers, to get to all those high schools in the service area…

I could be wrong, but I believed it changed to 16 and up.

Cracking down on bicycle theft would do 10x more for promoting cycling than extending Biketown. Run stings at public bicycle racks, track down the teams that steal bikes by the dozen from locked storage rooms in condos, and end the open-air chop shops operating throughout the city.

So much potential to expand into SW and get folks out of their cars. Maybe next time

Still no love for Southwest Portland. What’s up with that?

Yes, Biketown seems to have actively avoided S Portland, including Reed, Woodstock, Mt. Scott, Brentwood-Darlington, and Lents (although this looks like much of Lents will soon get access).
Really strange and silly.

From the graphic at top, it looks like their wasn’t much demand.

The map at the top is a heatmap showing response from East Portland and North Portland only.

They talked about equity being their main criteria, which usually means census tracts with a high concentration of low-income households and people of color. That’s how they landed on North Portland and East Portland expansions. With limited room to expand (since the bike fleet isn’t increasing, and expanding does cost money), it makes sense to me to focus on those factors.

More inequality in an effort to be equitable.

As a SW resident/commuter, I can appreciate that the demographics in the SW area might not “be there” for Biketown expansion. As green as we might want everyone to be, projects still need to make a certain business sense in order to happen.

The huge expansion from the small range of the original bikes is great but I haven’t been using Biketown much since the switch to electric since it’s so expensive. $2.50 can get me to the other side of the metro area with Trimet or I can ride an ebike for…about 7 minutes.

Is there any mention of when this will actually happen? Did I miss it? Can I park a bike without penalty in St Johns tonight?

They didn’t give a time frame and it’s definitely not live yet.

So is this still just a proposal? I’m not sure “get ready to ride” is good advice…

The Biketown service area keeps getting closer to the airport, but alas. And still no MUP on Cornfoot Road until 2027. The wait continues on taking Biketown to the airport (which in some/many cases is more convenient than MAX schedules/locations, and cheaper than Uber/taxi).

Aloha Biketown! This is great news for your customers.
[If I can make a small suggestion…please reconsider and add a station on parks property in Delta Park. It would be a great place for novice customers to try riding the bike on a ‘lower traffic street’ AND potentially be not too far from the MAX station if sited well.]

Todd, Delta park? Eeks, I imagine too much theft and vandalism at that location. Too bad security concerns Iimit our progress toward more environmental friendly modes of transportation.

No public funds available for bikes. All money seems to be going to homelessness. On that issue the more you spend, the more you need. 🙁

Do people get charged a huge penalty for cycling out of area in Maywood Park?