Now in their seventh year, the scrappy Portland nonprofit Bike Loud PDX is on a new trajectory for growth and impact. Back in September we shared that the all-volunteer group planned to launch neighborhood chapters. And last month they announced an official partnership with The Street Trust.

Here are the people leading Bike Loud into the future (with bios taken directly from the group):

RJ Sheperd (he/him) currently serves as Chair of Bike Loud PDX, and has served as Co-Chair of Bike Loud since 2019. Since moving to Portland in 2015, he has enjoyed living in a place where walking, taking transit, and riding a bicycle on Portland’s Greenways has been his primary way of getting around (and out of) the city. RJ continues to push elected officials and agencies to achieve Portland’s plans for zero traffic deaths by 2025; 75% of trips by transit, biking, and/or walking by 2035; and to build enough housing within the city limits for two million more Portlanders by 2050. During the day, RJ works as a software developer for a Spatial Informatics Group, a GIS Consulting firm.

Serenity Ebert is a disabled cyclist & activist living in Portland, Oregon with her cat Bagheera. Born and raised in Southern California, Serenity relies mostly on public transit and her tricycle to move around Portland. She is passionate about transit equity for everyone.

Nic is a licensed civil engineer living carfree in North Portland with his wife Jenna and their dog Fresno.

A bike commuter since high school, Nic has been a proponent of bike-oriented, auto-independent living. He specifically moved to Portland to live a car-light life and feel safe as a frequent bike rider. Through the pandemic, Nic has been motivated to get as many of his neighbors to start getting around by bikes/scooters/feet/transit and to support active transportation projects. He is also the transportation chair for the Overlook Neighborhood Association.

Mark is a recreational bicyclist going way back, with bicycle commuting mixed in. After moving to Portland almost 5 years ago, he commuted by bike daily for 3 years until the start of the pandemic. He’s involved in BikeLoudPDX as a way to push for more and safer bicycling streets, improved community education about cycling, and better laws regarding bicycling.

In 2011 Kiel received an Alice Award for his work organizing bike trains. He worked as a bike safety instructor for the BTA as well as a bicycle delivery person for UPS. Ten years ago he started Go By Bike which operates the largest bike valet in North America. Over those ten years Go By Bike has parked over 500,000 bikes. Kiel was one of the founding members of Businesses For A Better Portland and served as treasurer for Chris Smith’s Metro campaign. He lives in the Cully Green co-housing community with his partner, Kate, and 3 year old daughter.

Hami is a neurologist whose work and lived experience has helped him realize the importance of an active lifestyle. Hami is multimodal and uses his bike, public transportation and walking to move around (rarely using a car when absolutely necessary). He believes that the bicycle is an important tool in allowing people to share experiences, mitigating the worst effects of climate chaos and reducing the disparities in our society. Hami believes in building wide-ranging coalitions to turn these goals into realities.

Cathy is an urban design and planning professional. She worked for the City of Seattle for many years before founding several climate action groups including the Seattle Neighborhood Greenways (SNG) active transportation advocacy group. Cathy led SNG for nearly a decade and still serves on the SNG Board. She moved to Portland in 2021 to see if biking was better here. Cathy is the recipient of many awards for her work in urban design & community building including the National Highway Traffic Safety Administration Public Service Award that she received jointly with Greg Raisman from PBOT in 2016.

Julie grew up in Portland and has experienced the changes in our city as it’s evolved over the years. By trade, Julie is a professional photographer but her first love is the bicycle. She’s been riding since childhood but got hooked in high school, riding the newish 205 path and the Springwater Corridor. She eventually built up the courage to venture out into traffic to bike for groceries and errands. It didn’t take long to realize how dangerous most of our city streets are—including our beloved Greenways. Julie found her people when she met the folks at BikeLoudPDX. Making our streets safe for biking of all ages and abilities is essential for a city to thrive. Julie wants everyone to discover the joy of riding and to experience our beautiful city while on two wheels. 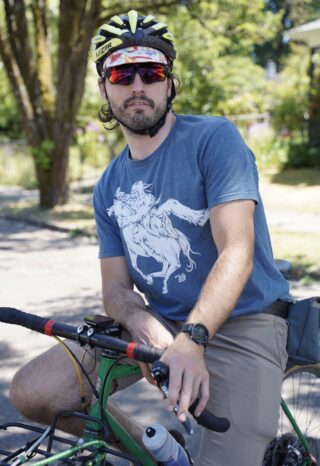 A native of Minneapolis, Paul came to Portland by way of Seattle. He grew up in a periodically one car household of five and has since relied heavily on bike and transit but now considers himself Polymodal.

David Binnig is a public policy master’s student at Portland State University, a longtime bartender, and a preferential bike commuter. Born in Cleveland, he lives in Southeast Portland with his wife and young daughter, who enjoys napping in the cargo bike.

Vivek is interested in the ways healthy transportation can help ourselves, our communities, and the world. Vulnerable road users have great rights that he’d like everyone to know. Vivek’s primary job is in safety compliance, so he knows what it takes to build a culture of safety. Vivek helped launch a successful bicycle collective, volunteered with his city’s Public Works transportation department, and founded Corvallis Right of Way, a traffic education non-profit focused on vulnerable road users. As a bicycling traffic instructor, you’ll find him in the community teaching about safety.

You can follow Bike Loud and find out how to attend future chapter meet-ups by signing up for their newsletter. Find them online at BikeLoudPDX.org and @BikeLoudPDX on Twitter.

Thanks for the write-up, Jonathan.

sorry about that Hami! fixed it.

It’s great to see Serenity in a leadership role. She is a smart and no BS activist (one of the critical ingredients for effective grassroots advocacy).

Any chance Bike Loud can get PBOT to do some enforcement? I haven’t had any luck despite trying.

Congrats! Seems like an awesome group, looking forward to seeing what they can do!