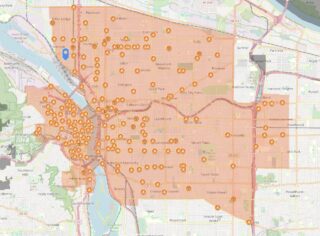 The City of Portland has released a survey that gives everyone a chance to create a fantasy Biketown system.

As we reported last week, the Portland Bureau of Transportation is eyeing a major expansion of the Biketown service area. Now they want your help to find where holes exist in the current system.

The survey includes a map where you can click a location and request a new station. Because PBOT has typically favored widening the coverage area over adding more bikes and stations to the system, there are still plenty of Biketown deserts in Portland.

One of those areas is the north Overlook neighborhood. Reader Richard R. has been pushing PBOT to add bikes and racks near the Kaiser hospital buildings for months. “Why no Biketown station, or even a single designated bike rack of any size anywhere near Overlook Park?” he asked in a recent email. “It’s a 1.2 mile gap in an expanding network. Why are people forced to pay $1 “out of station fee” (many riders) for parking near the park and the Kaiser Health buildings?”

Now folks like Richard have a chance to make things right. To make your request, simply click a spot on the map at the survey. You can even leave a comment to explain why the area needs bikes.

Biketown first launched in Portland in July 2016. PBOT unleashed a major expansion and switched the fleet to all-electric bikes in September 2020.

In addition to station location requests and general questions about Biketown use, PBOT also asks survey-takers to share general impressions of the agency overall.

Please take this survey. We need Biketown — and PBOT! — to go from good to great if we want to reach our cycling goals.

How about a station at EVERY public library in Portland? Be nice to have some predictable locations.

I would also like to see Portland Parks and Recreation partner on this as well and promote biking to our outdoor public spaces, as well as safe bike routes to all City Parks.

I always have thought it would be fun to go on a bike ride when I have out of town visitors using BikeTown bikes. The problem is when I go to find bikes it seems like the stations are either empty or have 1 bike when they have capacity for 4 or 5. Basically this lack of bikes at stations kills the idea if I have more than 1 friend visiting. I’m just not going to go to 3 or 4 stations to try to find bikes with some of us walking and some of us riding.

Our neighborhood association (which I’m on) identified 3 locations that would be a big help for us and would strengthen the existing network: SE 17th & Mall, SE Milwaukie & Pershing, and SE Lafayette & 21st. Any support for those locations is appreciated!

Hopefully this will help PBOT make a sensible expansion like Kenton and St. John’s or Sellwood and Woodstock!

All of these neighborhoods! And there is existing infrastructure. The ebikes are so practical for covering distance. The first iteration of 80lb bikes really didn’t make sense to move people through the hills and geography of the neighborhoods.

Yep. They feature the loop from downtown to the Sellwood bridge, but have no stations near Sellwood if you want to head in to grab some food. I went up to Pizzcato with my son for a slice and we had to leave the meter running or get charged like $25 for locking outside the service area.

Left my suggestions for two new stations: the Zoo and the Hoyt Arboretum. Would be amazing for Biketown users to be able to make it there, especially with the (horribly short-sighted) planned truncation of TriMet line 63 removing bus service from the Arboretum.

I like the station at EVERY public library idea! How about a station adjacent to every K-12 school? More predictable locations are good.

PBOT’s notification arrived in my inbox a few days ago. Two attempted emails bounced, and the survey form is clunky. However, I did complete the survey, and suggested PDX Int Airport be included (routing via NE 47th; or perhaps one day via Slough Trail east). Currently, my options are 1 hour 15 minutes via walk/bus/MAX; or ride hailing for $25-30 one way (15-20 minutes). Using Biketown would be 35-45 minutes for mere dollars, and allow one to arrive having pedaled before sitting on a plane for hours. I’m located in Humboldt, for those in Woodlawn, Concordia and Cully, the ride time and connection would be even quicker. Even if I could only depend on a bike being available to get to PDX (occasionally being forced to take MAX on my return trip), it would be a better option than what currently exists.

Vote Up2Vote Down  Reply
« PBOT’s ‘Streets 2035’ initiative is under the radar, but could have vast implications
How to make the most of your carfree Healthy Block this summer »